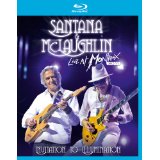 Carlos Santana is too cool for words. When I say that, I refer to both his widely-acknowledged status as a “Guitar God” and to the fact that he doesn’t utter a single word until the 30-minute mark of Invitation to Illumination, his 2011 reunion with John McLaughlin. Having another rock deity on stage appears to have inspired Santana, who performs with an extra little bounce in his step during this Montreux Jazz Festival show. This Blu-ray also has the unintended consequence of serving as a tribute to the festival’s late founder.

Claude Nobs, the festival’s general manager and founder, died earlier this year following a skiing accident. The Montreux Jazz Festival was established in 1967, and Nobs crossed paths with both Santana and McLaughlin in the early 1970s. That was also around the time the rock/jazz fusion-loving duo collaborated for 1972’s “Love Devotion Surrender” album, which was followed by a tour the next year. Exactly 40 years later, their first full-length concert in decades makes its Blu-ray debut.

After a heartfelt introduction from Nobs, the master guitarists take the stage. If you’re tuning into this concert hoping to hear Santana classics (“Black Magic Woman”, “Oye Como Va”) or contemporary hits (“Smooth”, “Maria Maria”), you’re out of luck. “Love Devotion Surrender” was a tribute to John Coltrane, and Santana and McLaughlin perform four of the album’s five tracks. Not surprisingly, the eclectic duo also finds time to honor Miles Davis, Led Zeppelin, and more.

My favorite performances included a fun medley near the start of the show (see the setlist below for the tunes it covered), and the “Vuelta Abajo” tribute to Miles Davis Quintet drummer Tony Williams showcasing McLaughlin and drummer Cindy Blackman Santana. I also enjoyed the way Santana and McLaughlin got after it during the thoroughly danceable “Let Us Go Into the House of the Lord”, and the pair was it its most captivating during the acoustic one-two punch of “Naima” and “Lotus Land Op. 47, No. 1.” Of course, the real showstopper turned out to be the now-bittersweet final song, “Shake It Up and Go”, which features a jubilant Nobs taking the stage to play the harmonica with Santana and McLaughlin.

I’ve reviewed a Santana concert Blu-ray before, and it wasn’t exactly the most electrifying home viewing experience. Thankfully, McLaughlin — the British virtuoso who Jeff Beck once called the best guitarist alive — is more outgoing with the crowd and his fellow musicians. McLaughlin appears to pull his stage partner out of his musical trance, resulting in the liveliest I’ve ever seen Santana in concert. (I’ve also seen Santana live a couple of times.)

That being said, this is still essentially a jazz concert with tracks that regularly clock in at more than seven minutes long. As you might suspect, there’s also not a lot of visual razzle dazzle to keep the more casual home viewer (meaning anyone who isn’t a huge fan of rock/jazz fusion) engaged. In other words, the musicians are having a lot more fun playing this stuff than I did watching or listening to it.

7. The Creator Has a Master Plan

12. Let Us Go Into the House of the Lord

Encore (Although the musicians barely left the stage.)

Santana & McLaughlin: Invitation to Illumination is presented in an aspect ratio of 1.78:1. The 1080i image is arrived at with an AVC MPEG-4 codec at an average of 30 mbps. This concert Blu-ray isn’t asked to do a lot of visual heavy lifting, but it still delivers an above average presentation. I was particularly impressed by the clarity in both medium shots and close-ups. (You can see the wrinkles on Nobs’ suit jacket and McLaughlin’s white dress shirt without even straining.) There are also deep blacks (in the form of the venue’s background), while colors come almost exclusively in the form of the stage lights, which results in intermittent banding.

The DTS-HD Master Audio 5.1 track is — besides Santana and McLaughlin — the star of the show. This is a robust track that offers an impressive separation of all the instruments featured on stage, including the ones played by the two guitar gods. Still, every single instrument gets a chance to shine (even if Cindy Blackman Santana’s drums get to shine slightly brighter when all things are equal). I also appreciated the subs giving us a low, persistent bottom end that never overwhelmed the rest of the sonic presentation. This is another strong showing from Eagle Rock. You also have the option of listening to the show in LPCM Stereo (which is the default track on this disc), but I strongly recommend you switch over to the DTS-HD track.

I realize this is a concert Blu-ray, and the most important thing is the music. However, I still found the complete lack of special features disheartening, especially when you consider the momentous reunion of Santana and McLaughlin for a full-length concert. At the very least, there could’ve been some sort of tribute to Nobs and his work with the festival.

This music isn’t quite my cup of tea, but I’d be ok putting this disc on in the background and letting it serve as a groovy soundtrack while I get some stuff done around the house. On the other hand, Santana and McLaughlin’s “old hippie” fan base — their words, not mine — will certainly be much more excited to rock out to this title.