Posted in: Disc Reviews by Jeremy Butler on August 27th, 2013 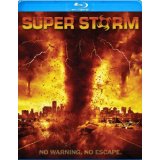 You can always tell a SyFy television movie right off the bat; they generally involve some type of scientific principle run amuck, they generally take place in a small out-of-the-way town, and they include at least one actor who has had moderate success on television or films. True to form, Super Storm (known as Mega Cyclone on IMDB) is the embodiment of all those things, and it tends to teeter between mediocre and mildly interesting as the story’s events unfold in unexpected ways revealing that no one is safe, especially the cast.

The story takes place in the fictional town of Heartfield. High School football coach Jason Newmar is in charge of a detention class that includes school newspaper reporter Susan (Cindy Busby, Heartland), football jock Lawson (Reilly Dolman, Stargate Universe), smart girl Megan MacGregor (Luisa D’Oliveira, Seeds of Destruction), and the coach’s son Will Newmar (Brett Dier, The L.A. Complex).  The relationship between the coach and his son has become strained with no prospect of resolution. Jason’s ex-wife and Will’s mother, Andrea, urges him to reach out to his son, who doesn’t feel inclined to talk to either of his parents about college or his plans after high school. Will has been working with Megan recently on a project for the science fair, a particle attractor. Little do his parents know, the particle attractor that has been garnered some attention from happy hitters in the scientific community is actually Will’s brainchild, not Megan’s.

Before this is revealed, strange weather begins to plague Heartfield. A red cyclone accompanied by destructive lightning is spotted all over town leaving no one in its wake. This storm is the product of X bosons, particles that are only supposed to exist on gas giants; the cyclone is absorbing matter, and if not stopped will lead to the destruction of mankind (dramatic, I know). Will and the detention class find themselves trapped within the high school when the storm hits, and with time running out must find a way to survive, all the while finding a way to stop the storm using the one thing that could save their lives….Will’s particle attractor.

I like to think of myself as a fairly intelligent guy, but this movie was little too much for me to comprehend, and that is its first flaw. When explaining why the phenomenon is happening, the film uses too many scientific principles to explain that it seems that you would need a physics degree to follow. I was able to gather the gist of what was happening, but in the long run it would have been best to simplify it a little more, because the more I was forced to think, the less I became interested.

The story also splintered into three separate storylines when the action got started; the problem was none of the storylines were strong of enough to support the story on their own. No one really established themselves as the breakout performer, and everyone basically clamored around trying to make it back to one another. It lacked passion on the part of the cast; no one had any real conviction or will, making their performances overall boring.

On the positive side, the film did possess an unpredictable quality when it came to the mayhem factor. A cast of around twelve swiftly began to dwindle down to the bare bones, with no discernible pattern for who would survive and who would die; this is possibly the film’s only saving grace.

Super Storm is presented in an aspect ratio of 1.78:1. The 1080p image is achieved with an AVC MPEG-4 codec at an average of 25 mbps. Overall video quality is hit or miss at best, the film seesaws between average picture quality and shoddy picture quality. Though not overly dark and clear, the background picture periodically throughout the film’s duration was grainy, most prominent in exterior shots. Also the picture is not remarkably crisp or sharp, and discoloration on the left side of the screen is also noticeable, not so much during interior shots but very clear during exterior shots. The CGI work on the film was also unimpressive; the cyclone as well as the lightning graphics appeared extremely animated.

The Dolby TrueHD 5.1 audio track did not compliment the film. The conversation between the cast during the non-action sequences was clear, but the soundtrack and score tend to drown out the dialog, especially during the scenes of destruction, where the crackling of the lighting overrode the screams.

No Special Features were included on disc.

The case of Super Storm, the bad outweighed the good; between the cheesy CGI effects, mediocre story, and average acting, the film does not leave a lasting impression and will be easily forgotten once the credits start rolling.

Jeremy Butler is a film school graduate of the International Academy of Design and Technology. He is been writing for Upcomingdiscs since 2012; however, movies have played a big part of his life for much longer. Favorite genres include horror, science fiction/fantasy, and comedy. Favorite movies are V for Vendetta, Boondocks Saints, Kiss Kiss Bang Bang, and The Godfather.
Storm Surfers Arthur Newman (Blu-ray)