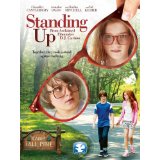 “The bullies tried to make us feel small; in a weird way it did just the opposite. I wasn’t afraid anymore, and Howie wasn’t alone. God has a way of giving you what you need when times get tough.”

Traditions die hard, but not all traditions are good traditions. Such is the case in Standing Up, D.J. Caruso (I AM NUMBER FOUR) tale based on the novel The Goats by Brock Cole. The film focuses on a subject that has been receiving more and more attention as the problem continues to grow: bullying. It seems like a week doesn’t go by without me hearing a story about someone becoming the latest victim of someone else’s cruelty, and good to see a filmmaker take the time to tell a meaningful story about two kids who are victims of a cruel practical joke banding together and forming a friendship that stands the test of time.

“I just don’t get why people do it. Hurt people, I mean you actually feeling worse when you hurt someone.”

At Camp Tall Pine there is a yearly tradition of selecting the kid who doesn’t fit in, taking them to a small island a mile away from the camp, stripping them naked and marooning them on the island (cruel, right?). This year, Howie (Chandler Canterbury,) and Grace (Annalise Basso, Nikita) are the victims of said prank, but when the kids come back to ridicule them more (or so they think), the two refuse to stand for it and swim their way to shore despite only one actually knowing how to swim.

Once they reach shore, Howie and Grace embark on an expedition that unifies and strengthens them both as they make the trek back to camp through the woods. During their three-day expedition, the twosome share several memorable albeit slightly criminal experiences: stealing a change of clothes from a nasty vendor, stealing a car, and squatting in a motel room. Meanwhile, Grace’s mother, Meg, an attorney who sent her daughter to the camp hoping it would help her make friends (possibly the reason was to allow herself time focus on work) when news of her daughter’s situation reaches her, rushes to find her child.

A sweet and endearing tale with two equally talented leads; Canterbury and Basso despite their age show the pedigree of veterans as the pair of social awkward preteens on the adventure of a lifetime. Canterbury, whose character was more than meets the eye and as it turned out had a few secrets, is the film’s tortured heart, and his performance is guaranteed to grab the audience. Basso is simply adorable as she emphasizes the “shy girl who has not yet came into her own” look. Their chemistry is tangible as they bring out the best in one another, the best instance seen as the two bonded in their commandeered motel room. One actor’s performance I was not expecting, and it disturbed a bit, but I guess that was sort of the point: Val Kilmer as the inappropriate deputy that the kids hitchhike with. Let’s just say after seeing Kilmer like that, I’ll never hitchhike.

The film’s message is an important one as the growing issue of bullying is becoming a serious problem. Caruso does a good job of highlighting the issue and not shying away during the opening sequence as the leads are stripped and abandoned. Caruso also gives the audience catharsis when the two are put into another bully situation and they rise up and overcome it; they say that violence is never the answer, but I think in this case it was forgivable.

To say the least, Standing Up hits all the right notes; a compelling and important story and excellent lead actors wise beyond their years; it was a worthwhile experience that I will treasure for years to come, and I will definitely be on the lookout for future work from the director as well as the actors.

Jeremy Butler is a film school graduate of the International Academy of Design and Technology. He is been writing for Upcomingdiscs since 2012; however, movies have played a big part of his life for much longer. Favorite genres include horror, science fiction/fantasy, and comedy. Favorite movies are V for Vendetta, Boondocks Saints, Kiss Kiss Bang Bang, and The Godfather.
The Good Life Zombie Massacre (Blu-ray)