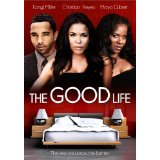 “We have to understand as a whole entire world that marriage will have its ups and downs, but we have to have faith in God that he will help us through those tough times to stay faithful and committed, no matter what happens.”

These words are attributed to writer/director/producer/actor Christopher Nolen. (Not to be confused with this guy.) They also appear at the end of The Good Life, a low-budget, unintentionally funny relationship melodrama working in the same arena dominated by Tyler Perry’s low-budget, unintentionally funny relationship melodramas.

On the surface, Marianne and Jacques Vandelay (Tangi Miller and Richard Gallion) appear to be the perfect couple. What neither of them knows is that both Mari and Jacques have eyes for someone else. Jacques is carrying on an affair with Honey (Maya Gilbert), the daughter of a client he hopes to snare for his fledgling business. (By the way, The Good Life never really makes it clear what Jacques actually does for a living.) Meanwhile, Mari’s personal trainer is her ex-boyfriend(!) Drew (Christian Keyes), and the two of them do their workouts at Drew’s home gym(!!) Eventually, both Mari and Jacques face the consequences of their adulterous choices and fight to keep their marriage from falling apart.

The Good Life is the kind of bad movie where it’s hard to say exactly how much the filmmakers are in on the joke. There are scattered moments that suggest Nolen was trying to be funny on purpose, including character names like “Honey Lane” and “Jacques Vandelay.” (In my imagination, Nolen is a huge Seinfeld fan.) Jacques also utters the non-sensical phrase, “Can we talk about this on a later basis?” more than once and with a completely straight face. There’s also the fact that this movie claims to be “inspired by a true story.” (Honestly, couldn’t every person who ever wrote a love story say it was “inspired by a story?”)

Not surprisingly, the majority of the evidence points to the idea that this is simply a pretty bad movie. Amateurish acting and meager production values can always be forgiven if the movie has some sort of worthwhile message or storytelling drive. The characters in The Good Life conspicuously espouse the virtues of faith, which is certainly worth exploring. This mostly comes through courtesy of Jacques’ best friend/co-worker Tony (Ray Grady), who busts out into an impromptu mini-performance of “Jesus is on the Mainline” at one point. Unfortunately, the movie gets bogged down by its underdeveloped characters and thin storyline, resulting in repetitive scenes like the ones that constantly have Honey threatening to destroy Jacques’ life if he doesn’t leave Mari.

The acting is passable, for the most part, but it’s not good enough to make the suspect screenplay believable. Miller is a steady, conflicted presence. But even though the former Felicity actress receives top billing, she’s not allowed to carry the movie. Instead, the bulk of the screen time is taken up by the tempestuous affair between Jacques and Honey. This is a problem because Gallion is terrible as Jacques. The best thing I can say about him is that his awful line readings make Jacques’ casual cruelty — he coldly tells Honey to wash his shirt following one of their encounters — unintentionally funny. Gilbert, on the other hand, possesses an intriguing spark as the spurned/entitled temptress. For a few minutes, it looked like the film was going to thoughtfully explore the mindset of the “other woman” — with Honey telling her disapproving sister that she had fallen in love with Jacques — before she devolved into full-on Fatal Attraction mode. Meanwhile, Keyes’ breezy performance — Drew has a take-it-or-leave-it approach to his hookups with Mari — is both callous and a welcome relief from the more tedious melodrama.

It’s obvious Nolen wanted to make a movie that showed how faith can help troubled souls overcome the considerable challenges of keeping a marriage together and functional. Instead, he made a cheesy, accidentally occasionally funny dramedy that reinforces the tired idea that men are the only ones capable of having sex without becoming emotional trainwrecks.