Posted in: Disc Reviews by Brent Lorentson on August 30th, 2013 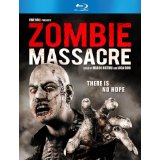 Seeing the words ‘Uwe Boll Presents’ was enough to have me a little worried about this one.  For the most part any time I’ve seen the name connected to a film, it resulted in a disaster most would rather have gone without seeing.  But then I think about the films Rampage and Postal, two films that are really quite fun if you give them a fair chance.  In the case of Zombie Massacre, Boll’s presence is in the form of producer (as well as a fun cheeseball appearance playing the President), and the talent put in charge of the production are a duo that show some promise.  Written and directed by Marco Ristori and Luca Boni (Eaters) are a pair of young, passionate guys who seem to love zombie films, but in a time where zombies have saturated the market, is average enough to garner any attention?

In this incarnation of the zombie film, it is a bacteria created by the US government that causes the zombie epidemic.  The small Romanian town is infected, and before the bacteria spreads any further the government hires a team of mercenaries to go into the town and set off an atomic bomb at the local power plant.  But things don’t go as planned once the mercenary team discovers this was meant to be a one-way trip for them.

The team is led by Jack Stone (Christian Boeving) who has been locked away in a military prison and is promised his freedom and to be reunited with his little girl once the so-called mission was to be completed.  It’s never really clear why he’s the perfect match for this mission, especially since along with a couple other rogue soldiers there is a female martial arts bad-ass with them always armed with a pair of swords.  The four more closely resemble a group you’d find in a video game than to be sent on any actual mission.  With Boll’s relationship with video game films, it wouldn’t surprise me if this were intentional.

Once the bomb is in place, the team has one hour to get to safety, and since the truck goes out of commission they have to hoof it, and that means going through the town that is infested with zombies.  Though the idea isn’t all that original, it’s still a fun idea, and we don’t exactly watch zombie films for the plot; we’re here for the carnage, and that’s where this film actually shines.  Sure, this is a low-budget effort and the box cover is awful, but some of the zombie effects here are pretty gnarly and creative.  Is this on par with what we’ve grown accustomed to with The Walking Dead? Not by a long shot, but it could have been much worse.

Considering IMDB has this listed at having a budget of a million dollars, I have to say I expected a little more.  Being shot on the RED we are given some nice images but nothing too creative on the visual side of things.  Everything is very safe with this film, and that’s something that is going to have people switching this off when we’re in a time where a zombie film is being released almost on a weekly basis.  Warm Bodies, though it’s a blasphemous attempt at a zombie film, at least attempted to bring us something new.

Zombie Massacre is something I’d expect to see as a late-night SYFY channel film where you watch it to nurse a night of drinking or insomnia, but not for fun gooey entertainment.  Though I can’t say I hated it, unfortunately this goes into the category of forgettable, which is unfortunate, because I believe the talent behind this is capable of so much more.

Zombie Massacre is presented in its original aspect ratio of 2.39:1.  The 1080p image is arrived at with an AVC MPEG-4 codec with an average of 24 mbps.  Using the RED allowed the film makers to capture so much detail, and it helps that they have some really nice makeup effects throughout the film.  Though the color has been heavily saturated, the images remain sharp and add plenty of production value to this feature, though there are some effects, like when a rocket launcher is used, that it is more than obvious it is computer-generated, and when there are some green screen effects the blending isn’t as sharp as you would hope, which lends to the cheesy factor of the film.

The DTS Master Audio 5.1 track is decent here, there is nothing exceptional but it manages to do its job.  The gun shots and explosions sound decent but the Foley work is a bit underwhelming here.  The score is somewhat unremarkable, and the music simply did nothing for the film but become a little bit of a distraction.  The dialog is clear through most of the film, but some of the accents I had trouble understanding, I’ll blame that more on myself than on the audio.

Super Freak the making of Zombie Massacre: (41:35) This little bonus feature is better than the actual film in my opinion.  Here we get to see some candid behind the scenes footage of the production filled with interviews and more.  See the directors and crew talk about the project with some much passion I wish the end product was so much more, because everyone involved seems to really be proud of what they did and seemed to have had a blast making the film.  Hearing what the makeup guys had to go through had me appreciate low-budget practical horror effects even more.  These FX wizards are the unspoken heroes of the genre.

Story Board Comparisons: (3:41) There are two segments, one of the prologue and the other of separate moments in the film.  Here we see the drawings that inspired the later images that would follow.  It’s nothing too remarkable other than that they can doodle quite nicely.

Overall I’d say the film was OK, but nothing I’d run out to Red box or search Netflix for.  But for what it’s worth, don’t let the Uwe Boll name be the reason you avoid this title; right now average just isn’t enough when horror seems to be in filled with so much variety these days.  But if you are up late at night and are channel surfing, this may be just the thing to keep you occupied.

Brent Lorentson is a horror writer and film critic based out of Tampa, Florida. With a BA in Digital Film, he co-wrote and co-directed Scavenger Hunt. His short stories have appeared in various horror anthologies. In 2019 his short script Fertile Blood will be a part of the anthology horror film Slumber Party. He is currently working on his first novel A Dark and Secret Place set to be released in late 2019. Favorite Films: Taxi Driver, Fight Club, I Saw the Devil, The Wild Bunch, Dawn of the Dead, A Clockwork Orange, Pulp Fiction, Heathers, The Monster Squad, and High Fidelity.
Standing Up Super Buddies (Blu-ray)