Posted in: The Reel World by Archive Authors on September 9th, 2013 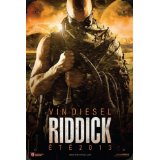 Vin Diesel. He is a man. A character who doesn’t seem real. He is an actor who seems like an artificial creation. He seems to be all brawn and Cro-Magnon heft with just a tiny spark of sensitivity and some sense of inherent intelligence. It turns out Diesel started out making small independent films like Multi-Facial and Strays which led to Hollywood calling for the films Saving Private Ryan and The Iron Giant,which then led to Pitch Black and a TV movie called The Chronicles of Riddick: Into Pitch Black with Diesel playing the Riddick character. Diesel went on to be identified with two other characters, Dominic Toretto (Fast and Furious) and Xander Cage (XXX) but soon bridled at being typecast, and then his career stalled. The sequel, The Chronicles of Riddick (not to be confused with the previously mentioned TV movie), had a much bigger budget with too many new plot lines, but, more importantly, too much pretension. But Diesel loved the Riddick character and got to buy the rights in exchange for a cameo in Fast and Furious 3: Tokyo Drift.

Riddick definitely drops the pretension of the second Riddick film, and the new film more closely resembles Pitch Black. The difference is that he winds up on a totally different planet. Now Riddick is a Furyan, so he wanted to go back home, but no such luck. He has to make do with a barren, unfamiliar and inhospitable world. He also has to self-heal a broken leg. No big deal.

After about a half hour of wordless unpleasantries, he finds an abandoned bounty hunter station. Riddick sends a message across the cosmos with a hope of getting off this lonely rock. I’m kidding. You don’t think Riddick gets lonely, do you? He wants off the planet because he sees an army of giant scorpions way off in the distance.

It turns out two different groups of bounty hunters arrive looking to bag this big prey, but for different reasons. That when all the fun starts. It’s old fashioned cheesy fun that we’ve seen in the movies for a hundred years: a large group of people who are stuck together for a common cause but who hate each other. The other members of the cast are led by an attractive new addition, Katee Sackhoff, who has an impressive TV back ground (Longmire, 24, Battlestar Galatica, Nip/Tuck). She definitely offers a nice change to all the raging testosterone, except she seems able to more that hold her own with the boys as she is known to sucker punch guys repeatedly.

Most of the rest of the cast is not particularly notable and somewhat disposable in every way. When I say disposable, like Ten Little Indians, they will be picked off one by one in a hostile environment that includes an elusive Riddick and an army of giant scorpions. Fans of the original the original movie, Pitch Black, will probably see lots of similarities. The budget was a modest $38,000,000 with Quebec doubling as a very inhospitable place and very little need for production design.

The real reason this film is made is because Diesel really, really wanted it. I saw Diesel last night on Craig Ferguson, and he was all smiles and laughter. He was not the severe and angry superman. But the public needs heroes, and Diesel knows that he projects the tough, no-nonsense man of few words. His deep voice closes the deal. He was a bouncer in New York and works on his muscles. So it is hard to find the line between reality and image. But he is an actor and seems intelligent enough to know what sells. He has been trying to get a historical epic on the life of Hannibal made for years. Each Fast and Furious gets him closer to that goal. In the meantime, he will play Kojack. But early in the month of September when very few expect much from a movie, Diesel has delivered a familiar stripped-down character that is welcome. Some pretentiousness still works its way in but is quickly forgotten amid the genre pleasures. If you are a fan of science fiction, you will enjoy yourself. There is lots of bashing and crashing and crunching, and you will get the bang for your buck.