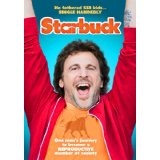 High concepts don’t come much loftier than the one behind Starbuck. An underachieving slacker learns he has fathered 533 children thanks to frequent deposits at a sperm bank 20 years earlier. In fact, the premise was so nice, writer/director Ken Scott decided to do it twice. Vince Vaughn will star in an American remake later this year called Delivery Man. Whether you’re excited for the new film or you think it looks stupid, I highly recommend you give the funny and touching French-Canadian original a look.

David Wozniak (Patrick Huard) is a charming screw-up in his early forties who works as a delivery guy for his family’s butcher shop. He’s the kind of clueless dolt who thinks growing pot in his apartment to pay off personal debts is a solid idea. David also has a fed-up girlfriend named Valerie (Julie LeBreton) who just found out she is pregnant and doesn’t believe David has what it takes to be a father.

Enter a lawyer with more life-changing news: 142 of the children David unwittingly fathered have filed a class action suit to discover his identity. (His sperm bank alias was “Starbuck.”) David’s shady lawyer friend (Antoine Bertrand) helps him with the case, because he’s the only legal counsel David can afford advising his client to plead insanity and stay away from his biological children. Naturally, David can’t resist the temptation and begins surreptitiously checking in on his kids. Eventually, he takes it upon himself to act as their guardian angel.

Of course, this is an entirely ridiculous situation, but Scott displays a deft touch with the material. The result is a surprisingly affecting film. All of David’s kids are young adults leading lives of varying degrees of happiness: there’s a struggling actor, a professional soccer player, a busker, a drug addict and more. The other people in David’s life display a cynical, weary attitude towards parenthood. But David’s covert encounters with his children show him instinctively doing fatherly things, like tossing one of his sons the keys to his car in a time of need, scolding other men on the street for checking out his daughter, and obnoxiously cheering in the stands like a typical soccer dad. The highlight is a beautiful, wordless sequence where he visits a son with cerebral palsy, and the two simply pass the time by keeping each other company.

There’s also a scene about halfway through the film — where David wanders into a room packed with his biological children — that would serve as the climax for most movies. Unfortunately, Starbuck goes on for almost another hour, and the second half of the film is not nearly as strong as the first. One of his biological children — a sour goth kid named Antoine (David Michael) — randomly moves in with David. More importantly, the thinness of the entire lawsuit angle becomes more apparent when the “Starbuck” saga becomes a national story. I also could’ve done without the thugs who periodically show up to attack David.

Vaughn’s going to have big shoes to fill, because Huard is pretty terrific in this movie. He’s a fine actor who gives this ridiculous material the proper amount of weight. Huard achieves this by mixing the weight of adult responsibility on David’s shoulders with a flustered lightness. It helps that he has strong chemistry with everyone in the cast. Bertrand (as David’s pessimistic lawyer) probably earns the most laughs, but I also like that LeBreton was able to break away from the Typical Girlfriend mold. Valerie is shown to be every bit as freaked out as David at the prospect of having a baby, but summons a level of maturity David must acquire by the end credits. There are also a couple of moving moments between David and his chop-busting family, including the scene where the audience realizes what he did with all the money he earned from the sperm bank.

To be perfectly honest, I didn’t give Delivery Man a second thought after I saw its trailer. (Except maybe to lament the continued slide of Vince Vaughn’s career.) Starbuck has changed all that. Now I’m curious to see how Scott adapts his own material for American audiences. On one hand, the Delivery Man preview features multiple beats and lines of dialogue that appear to be carbon copies of the original film. Then again, I doubt the PG-13 American film will dare to be as occasionally dark as the R-rated Starbuck. (I’d be surprised, for example, if American David finds one of his kids overdosing on a bed with a needle sticking out of her arm.) Anyway, unless subtitles are an absolute deal breaker for you — and you don’t speak French — I suggest you check out this entertaining dramedy.