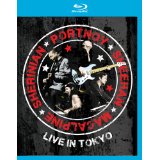 Supergroups are hot right now: witness the astonishing box office dominance of The Avengers, as well as Warner Bros./D.C. Comics’ frantic attempts to replicate Marvel’s success. But the idea of a supergroup — a collective whose members have previously achieved individual success — has been around for a very long time, and is most commonly found in the world of music. The members of PSMS (Mike Portnoy, Billy Sheehan, Tony MacAlpine and Derek Sherinian) certainly fit the supergroup bill. Late last year, they united to rock the faces off their fans in Europe and Asia.

Live in Tokyo captures their Nov. 14 show at Zepp Tokyo last year. PSMS — Portnoy (drums/vocals), Sheehan (bass/vocals), MacAlpine (guitar), Sherinian (keyboards) — was formed in January 2012. Although they weren’t exactly strangers, the group experienced some understandable growing pains when they first got together. (Portnoy expands on this in the Behind the Scenes featurette on this Blu-ray.) By the time this concert was filmed, however, PSMS had been together for nearly a year and they sounded like a totally cohesive unit.

The 95-minute concert serves as a showcase for each group member’s previous ventures and collaborations. (There are also a few covers thrown in, like Jeff Beck’s “The Pump.”) Portnoy (Dream Theater, The Winery Dogs) is the band’s unofficial leader and outgoing spokesperson, occasionally addressing the crowd in broken Japanese. Sheehan (Talas, Mr. Big) is a charismatic second-in-command, and the duo team to belt out the only song in the nearly all-instrumental set that has vocals. (Show-closer “Shy Boy.”) MacAlpine (best known as a solo instrumentalist) is actually the one who opens the show with his attention-grabbing guitar; he’s the quintessential “guitarist with mystique.” Meanwhile, Sherinian (Black Country Communion, Dream Theater) often appears to be in his own world, yet meshes impressively with his band mates.

To be honest, the group’s music — I guess it can best be described as “instrumental progressive metal” — isn’t quite up my alley. (Shockingly, I wasn’t exposed to a ton of “instrumental prog metal” growing up in Puerto Rico.) However, each group member’s technical mastery and impressive wealth of musical experience — at 46, Portnoy is the youngest guy in the band — kept me engaged throughout the show. That means the aggressive cutting between each band member for the concert film turned out to be both distracting and unnecessary; why not let the camera linger for more than three seconds so we can really see what these guys can do?

In addition to hard rock, there are hints of jazz and other surprising styles throughout the show. (“Stratus” is a particularly groovy offering.) At the other end of the spectrum, I dug the insanity of something like “Apocalypse 1470 B.C.” and was constantly impressed by some of the band’s seamless transitions from one track to another. Each group member also gets a chance to strut his stuff during extended solos, with Sheehan’s outrageous five-minute bass showcase winning the Solo Cup, a trophy that I just made up.

1. A Change of Seasons: I. The Crimson Sunrise

PSMS: Live in Tokyo is presented in an aspect ratio of 1.78:1. The 1080i image is arrived at with an AVC MPEG-4 codec at an average of 18 mbps. The Blu-ray offers a good-not-great visual presentation of a fairly straightforward concert film. Black levels are above average, with a distinct separation between the venue’s dark background and the black silhouette of the raucous crowd. In fact, the only notable source of color is MacAlpine’s blue shirt, given that every other black member is not-surprisingly outfitted in head-to-toe black. There’s decent clarity (and some video noise) in medium shots that make this a pleasing HD image, but it won’t really blow anyone away.

The DTS-HD Master Audio 5.1 track succeeds in giving the home viewer a strong sense of what it must have been like to experience this concert in person. Right from the opening moments, the rears immerse you in the anticipatory crowd noise; the track also shines during the audience clap-along portion of “The Pump.” The audio presentation of the concert itself is suitably heavy-hitting, with the guitar and bass commandeering the front speakers and Portnoy’s percussion mostly pounding out of the rears. In my experience, these Eagle Rock Blu-rays usually do a particularly great job with the bass/bottom end, and this is no exception. Sheehan’s bass playing sounds as dynamic here as I imagine it did live. You also have the option of listening to the show in LCPM Stereo, which is the default track on the disc.

Behind the Scenes: (10:38) Features backstage and rehearsal footage from the tour — for some reason, Sheehan conducted his interview in what looks like a utility closet — intercut with war stories from the tour. (This is also the only place where you get to hear MacAlpine and Sherinian speak.) Portnoy, in particular, looks exhausted and weary from what he calls an “amazing, but brutal tour.” He laments not traveling with his usual crew and gear (which probably led to a blowup like this one), but reiterates that the 22 ½ hours of frustration each day completely disappear for the 90 minutes they’re rocking out on stage. Presented in high definition.

Taking their act overseas was a shrewd choice for PSMS because their nearly all-instrumental set obviously transcends any sort of language barriers.

I’d barely heard of any of these guys before I popped in this house-rattling Blu-ray, but I enjoyed what they had to offer. Here’s hoping they find time to hook up again in the future (maybe for a U.S. tour)…and that they get to bring their own gear next time.