Posted in: No Huddle by Brent Lorentson on September 16th, 2013 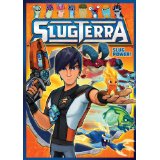 In the caverns beneath the planet’s surface there exists a place like no other, a place where duels are settled not with bullets but with slugs.  But these are not the kind of slugs that ooze their way across your driveway; instead they each have their own personalities and skills that are to be used in battle.  In the land of Slugterra, El is the quickest slugslinger out there, but there are a lot of baddies out there looking to take control over Slugterra, and thankfully he has the Shane gang (Trixie, Kord, Pronto and Burpy) to help him out.

This somewhat comes off as a slight knockoff of the Pokemon series, but really the kids that’ll be watching this I doubt will care, considering there is plenty of action to keep them entertained.  Though the characters are somewhat generic: Trixie, the witty smart and tough girl of the bunch, Kord, the big guy that’s also a bit of a softy, then Pronto, the goofy clumsy one of the bunch; what makes it all tolerable is the writers don’t go too far with the cheesy factor and maintain a somewhat serious tone (for kids’ cartoon standards).

The big villain for the Shane Gang is Dr. Blakk, who is of course out to take control of Slugterra but also intends to bring down Eli in the process.  Dr. Blakk, even though the name is a bit too on-the-nose for my taste, is actually a pretty awesome villain who turns Slugs into what they call “ghouls”, these soulless creatures that are used by his henchmen as rabid weapons to be fired.

In Undertow the gang is taken captive by a group of pirates led by Drake, who is somewhat of a hoarder with not only his collection of Slugs but also his toenail clippings.  The highlight of this episode came with the idea of Drake having a Slug that can clone any of the Slugs that are fired at him, therefore deflecting any damage.  I wish this Slug had become a fixture in later episodes, but considering the DVD only has so many episodes in total maybe this is a possibility.

The major storyline on the DVD is with the two-part episode The New Kid, where the gang meets up with a slugslinger who seems to be on the same side and would be a more than welcomed addition to the team, but can he be trusted?  Filled with slugbattles and even a nifty little train heist, the show is definitely not boring.

My only complaint with the show is the animation just isn’t quite top-notch for what it should be.  I’ve seen some very poorly written and produced shows, and this is definitely not one of them. The DVD release by Shout Factory is a nice teaser to help get unsuspecting kids hooked onto the show.  I’d like to see this world fully fleshed out and what the writers will do with these characters.  It’s little cartoons like this that come along that show kids entertainment doesn’t just have to be colorful and filled with random noises to keep their interest but actually stories with character development are very much welcomed and enjoyed.

Brent Lorentson is a horror writer and film critic based out of Tampa, Florida. With a BA in Digital Film, he co-wrote and co-directed Scavenger Hunt. His short stories have appeared in various horror anthologies. In 2019 his short script Fertile Blood will be a part of the anthology horror film Slumber Party. He is currently working on his first novel A Dark and Secret Place set to be released in late 2019. Favorite Films: Taxi Driver, Fight Club, I Saw the Devil, The Wild Bunch, Dawn of the Dead, A Clockwork Orange, Pulp Fiction, Heathers, The Monster Squad, and High Fidelity.
Winx Club: Magical Adventure Spartacus: War of the Damned – The Complete Third Season