Spartacus: War of the Damned – The Complete Third Season

Posted in: No Huddle by Gino Sassani on September 16th, 2013 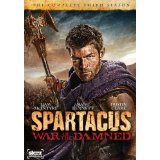 “Spartacus’ mongrel horde has swelled with each passing victory since Glaber’s defeat at Vesuvius. They added thousands to rank liberating the mines of Lucania. Slaves across the Republic, humble and grateful to their masters for so many years, have broken to treachery in the wake of ever expanding legend of Spartacus.”

Starz has had a pretty good run with their Spartacus series. Coming off the style of blood and violence that was popularized with Zach Snyder’s 300, Spartacus brought that comic book/graphic novel intensity to television. The presentation was both original and effective for a television series. Instead of presenting a typical ongoing story, Starz used a serialization method that made each season a separate collection of shows while maintaining the continuity that fans could appreciate and follow.

First came Spartacus: Blood And Sand. The series starred Andy Whitfield as the legendary leader of Rome’s slave rebellion. The show utilized the recent trend of showing larger-than-life historical figures before they were larger than life. The series followed Spartacus as a gladiator working for the house of Batiatus, played by John Hannah. Here he meets the Jedi Master-like Oenomaus (Mensah) where he learns the art of being a gladiator. Here he becomes the main rival for the reigning champ Crixus (Bennett). The two eventually come to terms and lead the house slaves in a bloody rebellion that pretty much wipes out the House of Batiatus.

The story was expected to continue and show Spartacus growing his rebellion into the fearsome force it was. Tragic circumstances would intervene, and star Whitfield was diagnosed with non-Hodgkins lymphoma. To give him a chance to seek treatment and a hopeful recovery, Starz opted to go with a prequel for the next season. This series did not address Spartacus but rather gave us more of Batiatus and his gladiator empire. The show was called Spartacus: Gods Of The Arena. Here Oenomaus and Crixus would dominate the scene leading up to the eventual arrival of Spartacus.

The plan was then to continue where the first season left off. Unfortunately, Whitfield was not responding to treatment and had become terminal. After careful consideration and with the blessing and input from Whitfield himself, the part was recast with Liam McIntyre taking over the role of Spartacus. Whitfield passed away, but not before signing off on McIntyre’s casting. I’m not sure there’s a precedent for this series of events, but McIntyre filled the role about as seamlessly as could be expected. In intervening year and prequel likely helped to blunt the impact of a new face, and they have enough similarities that it was not going to be a total shock to see the new actor. This wasn’t a Sean Connery suddenly becoming a quite different Roger Moore kind of situation.

Spartacus: Vengeance continued the story from the first season with McIntyre now in the role. This season would show Spartacus still with a small core following and his revenge against the Rome that had enslaved him. His main enemy is Rome’s Gaius Claudius Glaber, who takes the fight personally. His defeat cements Spartacus legend.

Finally we reach the end with the release of Spartacus: War Of The Damned. By now the army of Spartacus has literally grown into the thousands. They have defeated Roman legions and are now a pretty significant threat to the empire. By now the characters have changed very noticeably from the way they were earlier in the series. They have been hardened and perform acts of brutality on their enemy that are just as cruel in victory. After taking a city for food and supplies, they treat the Roman citizens there quite harshly. Spartacus must find his way and eventually recognizes what he is becoming and puts the rebellion back on its original course. That’s going to mean infighting and betrayal from within. In the end, however, he has finally bonded with former rival Crixus to the point that they see each other as brothers.

If you slept through your World History classes as they were talking about the Roman Empire, this isn’t going to help you make up for the knowledge you missed. While there is an obvious attempt to include authenticity into the series, there is also a lot of fictionalization going on here. After all, this series is not intended to educate, but rather to entertain and it does do that quite effectively. Historical play gets serious when the character of future ruler Julius Caesar, played by Todd Lasance, enters the story. Once again this is a very young Caesar before he was as known to history. Still, he played no part in the Spartacus events and likely never even met the man. Here he is placed as a spy in Spartacus’s occupied city by the new man in charge of ending the rebellion. That man is Crassus, played quite effectively by Simon Merrells. Now this is a proper adversary for Spartacus, and the strategy between them becomes the most compelling material of the series. He is trying to use the events of this war to give his son Tiberius, not to be confused with the future emperor, or starship captain, for that matter. He places the young boy in command, and that doesn’t sit well with Caesar. The two end up bitter enemies, and that doesn’t end well for Tiberius at all.

Another historical figure who was not an actual participant is the famous pirate of the era, Heracleo. He was indeed a real person and is played here by Vince Colosimo as a carefree kind of character not very unlike Johnny Depp’s Captain Jack Sparrow.

The cast also includes Dustin Clare in the underrated performance of Gannicus. Gannicus is likely the most complicated emotional character in the drama. He was one of the few gladiators to actually win his freedom in the arena. He only happens into Spartacus’s world by chance and is never a complete believer in the cause. He’s likely the most skilled fighter and yet refuses to take any command position. Although he’s not the fervent believer he was, in the end one of the most faithful to Spartacus. He fought more out of admiration of the man than the cause itself. He was a free man and had no need of this particular rebellion. His last scenes in this season are among the most emotional you’re likely to encounter on television today.

They used to call these sword and sandal movies. These included the likes of Spartacus as a character and rivaled the spaghetti westerns in Italian cinema for decades. That genre could now be called the sword and blood film or series, and Spartacus certainly leads that charge. The production values are quite high, but there is a bit “extra” when it comes to blood here. You’ll get plenty of dismemberment and decapitations. You’ll have your fill of slashings and impalements, to be sure, a lot of it in slow motion with plenty of exaggerated computer-generated blood to bring the point home (pun intended).

The locations are often stunning. Costumes look great, as does pretty much every aspect of this production. Unfortunately, Starz only sent us the DVD release for review, and I can’t really appreciate it all as much as I have the earlier shows on Blu-ray. Extras include an overview of the entire series, a visit to the final days on the set, and features on the f/x, costumes and gladiator training.

The final episode is a moving tribute to all that came before it. I was happy to see a shot of Andy Whitfield declaring, “I am Spartacus” included in the last moments. Each of the characters gets a pretty good send-off. This is, after all, a season where pretty much all of your favorite characters have to die. As much as the show has been willing to allow its liberties with history, Spartacus and his crew are pretty much doomed. (If that’s a spoiler, you really did sleep through those history classes.) The season title of War Of The Doomed pretty much says it all, doesn’t it? Still, the series brought the character to life like no film or show has done before with the possible exception of Kirk Douglas in the 1960 film. Both gave us the truly larger-than-life figure who almost brought down an empire. “Spartacus stands but mortal man. I have yet held privilege of one that could span distant ground within single breath.”

Gino Sassani is a member of the Southeastern Film Critic's Association (SEFCA). He is a film and television critic based in Tampa, Florida. He's also the Senior Editor here at Upcomingdiscs. Gino started reviewing films in the early 1990's as a segment of his local television show Focus. He's an award-winning recording artist for Omega Records. Gino is currently working on his 8th album Merchants & Mercenaries. Gino took over Upcomingdiscs Dec 1, 2008. He works out of a home theater he calls The Reel World. Favorite films: The Godfather, The Godfather Part II, The Body Snatcher (Val Lewton film with Karloff and Lugosi, not the pod people film), Unforgiven, Gladiator, The Lion King, Jaws, Son Of Frankenstein, The Good, The Bad And The Ugly, and Monsters, Inc.
Slugterra: Slug Power! The Family