Posted in: Disc Reviews by William O'Donnell on September 16th, 2013 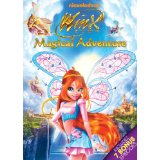 Half of this story deals with a group of teenage faeries, who are smitten with some cute boys from a neighbouring magical kingdom, trying to connect with said boys. The other half deals with this same group of faeries and boys fighting against a trio of evil witches trying to steal all of the world’s “positive magic.” In both halves there is a lot of girlish giggling, butterfly fluttering and sparkly colours….the enemy of any diabetic epileptic.

The plot wavers between flighty (pun sort of intended) teen romance, where the faeries focus their magical powers on obtaining cute-boys and cute-animal companions, and a action-fantasy filled with large scale battles with nightmarish monsters, complete with mass destruction of buildings, swordplay and vicious exchanges of energy blasts.

The character designs reflect a very heavy influence from Anime, with their improbable body shapes and enormous eyes. As well, the fact that they keep fluffy, but fictional, critters, call out the names of their attacks, and transform in stylized fashions into their superhero forms also speaks to the Japanese influence, especially the influence of Sailor Moon. Their actions outside of combat though, scream North American teenager (or European I suppose, since this is originally an Italian creation). Despite having access to mystical powers and frequently attending adventures across the universe, they still become vapid when it comes to fashion, their hair, or playing with cell phones.

This film is done in a 3D computer animation style that is different than the 2D television series it originated from. The battles are decently set up and the combat animation is pretty smooth but the dialogue frequently mismatches the mouth movement, possibly because it is dubbed over from Italian, and the body movements during conversations look a bit choppy at times.

This story opens with a parody of gossip tv programs covering the “news” about the faery ball (some sort of magical prom or something), which sets the tone for how vapid it intends to be. Essentially, this is a pandering mess that amalgamates girly stereotypes, such as the desire to be a fairy, a princess, and a celebrity all at once, that is spliced together with cuts to musical montages of rainbow coloured nonsense where the characters frolic with an astonishing lack of care or concern for the supposedly epically dire situation their universe is in (what with a great evil force looking to vanquish them and all).

Fullscreen. The colours look very bright and things are acceptable clean looking in both the feature film and the episodes on the bonus disc.

Dolby Digital Stereo. The horrifying music from this show comes through clearer than a grown man would ever want it to. Same goes for the uninspiring voice performances, all of which are decently clear.

7 Episodes Bonus Episodes from Winx Club: The Power of Believix : Fans of Winx are getting their money’s worth by having a considerably large amount of episodes attached to this film on a separate bonus disc. Personally, I am not quit as enthusiastic to see these girls paint their rooms, giggle about cute boys, or get their pictures taken by other vapid girls whose only distinguishing features are a slightly different hair colour. If H.P. Lovecraft and Clive Barker used the Hellbound chains of the Cenobytes to leash me to a bed then locked me in a room with the Old Gods themselves…I still would not have as many nightmares as the ones inspired by the force-fed, contrived “cuteness” of this show.

If I were to act confused about how this show is popular, I’d have to be confused about Barbie, Bratz, Sailor Moon and a number of other products aimed to promote capitalist values to young girls…which I am. This is just like the rest, but with a little more “magic” involved. But it has been released in 38 different countries…so perhaps those against Winx are the minority.