Posted in: The Reel World by Archive Authors on September 17th, 2013 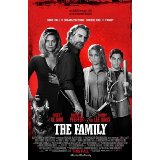 I always have a problem when a comedy involves a lot of people getting killed, but there are always exceptions. Mob comedies are rarely completely satisfying, but there is one exception, and that is The Freshman with Marlon Brando and Matthew Broderick, which was completely inspired and hilarious, mostly because it defied expectations at nearly every turn. The new mob comedy, The Family, stars Robert De Niro and Michelle Pfeiffer, who have both made OK mob comedies before, Analyze This and Married to the Mob respectively. Almost any other mob comedy you can mention falls flat (including Analyze That).

Two of the interesting distinctions are the inclusion of Martin Scorsese as executive producer and Luc Besson as the writer/ director. Executive producers generally don’t do much except contribute early on; there are some very obvious moments that show Scorsese’s influence, but this more Besson’s show.

Besson is extremely prolific as a producer, but he is probably best know as a writer of Transporter and Taken films and the writer/director of films like The Fifth Element, The Professional, and La Femme Nikita. The interesting slant is that the witness protection for this American family is in Normandy, France. It’s easy to detect a satiric blade dissecting the angry American. These Americans are very angry and stage assaults on any and all insults. They have almost zero tolerance to being taken advantage of, because they have always been problem solvers before they went into witness protection.

Tommy Lee Jones is given the task of keeping this family in line, and he has little success, but in fairness, they cover their tracks well. The big problem is the mob wants the entire family dead with a $20,000,000 bounty on their heads. With that kind of money, there are a lot of dangerous people who are very motivated. They just need to keep a low profile, which they don’t.  The son and daughter are just as competently dangerous as the parents in their own way. In fact, this film has a slight similarity to the Addams Family, because they handle their differentness with a sense of entitlement. It’s the rest of the world that has a problem. Besson often has a large amount of violence and mayhem, and that is certainly true here. There are many small and special moments. The highlight of the movie is one of those moments. That is when his French neighbors invite him to a film society screening, because they are led to believe he is a writer. The film originally scheduled is Some Came Running with Frank Sinatra and Dean Martin, but that film does not arrive. I will not say what film arrives, but it gives De Niro a great chance to shine as he basks in a great film that he truly does love.

De Niro is getting up there but gamely goes on acting, often with diminishing results. This time he is strong, vital and engaged, partly because he seems to respect the project and tries to bring new dimensions to previous portrayals that were among his best.

The Family is not of the caliber of previous films like Goodfellas, Casino and The Godfather Part II, but few films are. The ambition of The Family is to present violence and destruction as simple entertainment. If it has greater ambitions, it hides them well, but I do see many satiric moments that hint that Americans resort to violence far too quickly. Americans do like their movies with lots of violence, but I think we’ve taught the rest of the world similar tastes. I also think many members of the audience might be envious at seeing how well violence solves problems.

I do think The Family is fun, but I do feel guilty at laughing at a high body count.

Spartacus: War of the Damned – The Complete Third Season The Black Waters of Echo’s Pond (Blu-ray)