Posted in: Disc Reviews by Jeremy Butler on September 17th, 2013 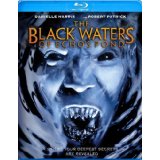 Ever wondered what Jumanji would have looked like if it were rated R? Well, look no further than The Black Waters of Echo’s Pond. This B-movie focuses on the perils of secrets coming to life through the assistance of a demonic board game which ultimately leads to all kinds of destruction and mayhem. While watching, a thought occurred to me: Why is it that many of these movies start off the same way? With a tale of a place where several people have died under suspicious circumstances, and the first thing the characters do is rush off to this accursed place. Well, it’s safe to say that the film doesn’t really score points for originality in that aspect.

Turkey 90 years ago: an archeological dig unearths a mythical game said to have been played by demons. The explorers’ curiosity gets the better of them, and they reassemble the game and play; none survive. Fast forward to present day, a group of vacationing friends that includes rich jerkoff Rick (James Duval, Independence Day), twins Erica and Renee (Electra and Elise Avellan, Grindhouse), Kathy (Danielle Harris, Hatchet II) and her boyfriend Trent (Walker Howard, The Express), soft-core actress Veronique (Mircea Monroe, Hart of Dixie), as well as a few other friends make their way to the island expecting a fun-filled weekend. (Isn’t that how it always starts?)

From the opening bell, it is obvious that there is some tension among the group with much of it being directed at Rick; right off the bat the audience is given the impression that quite a few secrets exist among this group, and Rick is at the heart of many of them. Their first night, the group is desperate for something to do and happen upon the game, hidden in the wall of the house they are staying in. (OK, that should have been their first red flag, am I right?) For lack of better options and downright stupidly, the gang decides to play to the game, and one by one, all of their innermost secrets come out, leading to irreparably damaged friendships and homicidal urges.

Ever wondered what happened to the guy who played Randy Quaid’s son in Independence Day? Well, I found him, and he is hardly the only recognizable face in the film. Scream queens Danielle Harris and Mircea Monroe are also present along with few others you’re bound to recognize, but just because they are recognizable doesn’t mean they give a quality performance. The acting for the film is not terrible, but it is not necessarily good either. None of the cast does anything that distinguishes them from the others or leaves a lasting impression. I was very disappointed that despite the above-average talent pool of the film, the cast’s portrayals were unrealistic, clichéd, and inconsistent.

The inconsistency of the actors’ performances can be partially attributed to the underdevelopment of the overall story. Secrets are intended to be the focal point of the film, specifically the secrets that exist among the group: good premise, bad execution. The reason I say that is because the timing for revealing a few of the secrets was off.  An example of this was the biggest secret of the film, the only one that resulted in the death of someone close to the characters; details of this secret are teased at two separate points, but the truth is not revealed until practically the end of the movie, and for me that was a complete waste. When they first hinted at the truth, they had my attention, but they take too much time before playing their trump card, and by the time they do, whatever interest I had before had long since diminished. Also, it becomes evident that there is no reason to care about any of the characters, because once all the secrets are out there, despite whether they are victim or perpetrator, there are no redeemable characters.

One thing the film did have working for it was the executions, the gore. It is obvious from the first assault that the production team spared no expense when it came to making it look real and delivering first-rate gore. In fact, I must confess that several execution scenes actually got me to cringe, especially the one carried out in the basement. However, it seems that the production team spent all of its energy on making the audience cringe at the expense of a well-rounded story.

The Black Waters of Echo’s Pond is presented in the aspect ratio of 1.85:1. The 1080p image is achieved with an AVC MPEG-4 codec at an average speed of 27 mbps. Overall picture quality I would rate as average; the image is clear but not all that crisp. The dark levels are good, and the film displays an interesting color palette; for example, the use of red in background during the basement sequence was a very good addition to the scene.

The Dolby TrueHD 5.1 audio track is hit-or-miss. The dialog is clear and discernible throughout the film’s duration, but there are a few points where the score overpowers the dialog. Plus the audio levels were a bit low and require minor cranking of the volume. The most significant miss for the audio came during action sequences where the impact from the punches was very faint and muted.

Alternate Opening: (2:36) This two-minute scene offered a different demise for the original founders of the accursed game. Plus side, the scene provides more gore and detail then in the original opening. Minus side, it’s more comical than horrific.

Between how long it takes the film to get the ball rolling on the massacre and the poor execution of several of its most compelling details, The Black Waters of Echo’s Pond loses a lot of its original appeal. Not to mention that if you remove the gore, I’m pretty sure that we be looking a genre change from horror to black comedy. Also, I still have no idea what the point was of including the goat man that can be seen at couple different intervals; he served no real purpose.

Jeremy Butler is a film school graduate of the International Academy of Design and Technology. He is been writing for Upcomingdiscs since 2012; however, movies have played a big part of his life for much longer. Favorite genres include horror, science fiction/fantasy, and comedy. Favorite movies are V for Vendetta, Boondocks Saints, Kiss Kiss Bang Bang, and The Godfather.
The Family Castle: The Complete Fifth Season