Posted in: No Huddle by Gino Sassani on September 18th, 2013 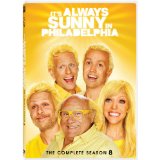 Ever wonder what the kids of South Park might be like if they ever made it to adulthood? While I’ve not seen that many episodes of the FX series It’s Always Sunny In Philadelphia, that was the first observation that came to mind. These are the South Park kids all grown up. They’re crude, raunchy, mean, and most importantly, they are as politically incorrect as ever. If you need an example, I can offer one right from this episode. The guys have a Christmas tradition that dates back to their childhood of throwing rocks at moving trains. An episode I caught a while back had two of the guys going to an abortion rally because they suspected that pro-choice chicks gotta be easy. Sound like anyone we know? If you love irreverent humor that’s not afraid to cross over the line, this F/X series has everything you’re looking for, and without those silly construction paper animation limitations. These are real dudes.

The best way to introduce you to the world here is through the characters. The Philadelphia setting and all of the other trappings really don’t matter. You could put these characters any place, doing almost any jobs, and the series would pretty much be the same. The actors and some cleverly written dialog really make the show.

Meet Frank Reynolds (De Vito). He’s not far removed from Louie on Taxi. He’s got money but lives like a bum with Charlie. His nephew Dennis (Howerton) runs a bar with his childhood friends, Charlie (Day), Mac (McElhenney), and his sister Dee (Olson). If not for Frank’s money bailing them out of jams, the bar, Paddy’s, wouldn’t last a day. There are almost never any patrons, and they are too busy scheming and even screwing each other to actually make the bar turn a profit. Remember when Seinfeld ended with the gang being locked up for their self-absorbed personalities? Those guys have nothing on these guys. The trouble is that not only are their schemes cruel, they never work out in the end anyway. Never before has it been so much fun to watch a group fail this miserably.

What makes this show special is that the cast also serve as the showrunners. Rob McElhenney created the series and Glenn Howerton and Charlie Day serve as producers and main writers. There’s really no questioning the talents of Danny De Vito. It’s a special ensemble that really makes this off-kilter comedy thrive on cable. This stuff never happens on network television.

So what kind of trouble does the gang get into in season 8? I’m glad you asked. How would you like to be on life support and it’s up to Denise and Dee to decide if they pull your plug? And what if there was maybe some money to inherit? Sounds like Pop Pop’s in trouble, except there’s a rumor he knows where buried Nazi treasure is hidden. That’s Pop Pop: The Final Solution, and this episode goes to the dogs…literally. There’s a wacky Halloween episode that finds the guys hauled into an interrogation room facing a detective when Maureen’s wedding turns into a real nightmare. The boys have some ‘splainin’ to do. This one features venomous bat bites, zombies and inbred relatives. It might scare the pants off of you…if it weren’t so funny. Charlie And Dee Find Love has the duo hooking up with a rich brother and sister. But, the gang figures their only in for some humiliation so they decide to “help out” all but assuring said humiliation. The most clever episode of the season is The Gang Recycles Their Trash. Within the setting of a city garbage strike the episode manages to bring back tons of lines, scenes, schemes and situations from past episodes. Now this is how you do a clip show. No clips.

The DVD includes some commentary tracks and a few deleted scenes. There’s a gag reel and a fake clip for a show on the moms doing an Odd Couple bit.

Political correctness is alive and well and brought to you from the city where American liberty was born. Of course, I’m not sure our founding fathers had this exactly in mind when they were building that bright shiny new country. But I’d bet that even Washington would have laughed his keister off if he saw this stuff. After eight seasons you’d think this stuff might have gone dry by now. Hey, South Park is still going strong at twice as many episodes. Eventually, someone will indeed pull the plug. However, “You do something like pull the plug, you gotta stick around until the lights go out”.

Gino Sassani is a member of the Southeastern Film Critic's Association (SEFCA). He is a film and television critic based in Tampa, Florida. He's also the Senior Editor here at Upcomingdiscs. Gino started reviewing films in the early 1990's as a segment of his local television show Focus. He's an award-winning recording artist for Omega Records. Gino is currently working on his 8th album Merchants & Mercenaries. Gino took over Upcomingdiscs Dec 1, 2008. He works out of a home theater he calls The Reel World. Favorite films: The Godfather, The Godfather Part II, The Body Snatcher (Val Lewton film with Karloff and Lugosi, not the pod people film), Unforgiven, Gladiator, The Lion King, Jaws, Son Of Frankenstein, The Good, The Bad And The Ugly, and Monsters, Inc.
The Haunting of Helena Army Wives: The Complete Seventh Season