The Haunting of Helena

Posted in: No Huddle by Jeremy Butler on September 18th, 2013 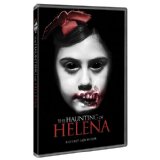 “You must leave this house before it’s too late. Leave now; I won’t be able to help you later.”

First of all, call me superstitious or paranoid, but when someone gives you that kind of warning about a place, it’s probably best to heed that warning. After watching The Haunting of Helena I am seriously reconsidering whether or not I’m going to let my kids believe in the Tooth Fairy. I’m not one who scares easily, but the tense atmosphere around this story makes for a truly haunting film (no pun intended).

Sofia is a single mother in search of a new start after a heartbreaking divorce. She, along with her with young daughter Helena, moves into an apartment building in the south of Italy to try to begin a new chapter in their lives.  Trouble begins after a car accident that the two escape virtually unscathed other than some minor scratches and bruises and the loss of Helena’s first baby tooth.  After the accident, Sofia begins to notice a change in her daughter; she becomes obsessed with the Tooth Fairy and teeth, going as far as to purchase teeth from kids at her school with coins that Sofia did not give her. When prompted about where she got the money or why she wanted the teeth, Helena only replies that she was put up to it by the Tooth Fairy, who apparently resides her in closet.

Unsure what to do and believing that her daughter’s behavior is nothing more than trauma caused by their car accident, she seeks the counsel of a professional who first speculates it may be nothing more than an overactive imagination; however, he also speculates something else: Apparently unbeknownst to Sofia the building that she resides in has a particularly chilling backstory. During the war, an Italian army officer as punishment for his wife’s flirtation removed all her teeth one by one, locked her in a closet, and left her for dead, the very same closet in the room that her daughter now currently resides. Sofia fights this idea at first, but once she starts to see things herself, the truth becomes undeniable, and she struggles to maintain her sanity while trying to protect her daughter from the evil spirit that looks to claim her.

I’ve seen my share of horror films, and normally I remain unaffected by the vast majority of them (especially the modern retellings), but it took a little more to shake this one off. The combination of chilling music, the palpable look of terror on the mother’s face as well as the bone-chilling stares of the daughter, and the excellent quality of the special effects makes The Haunting of Helena a unique one. It was a story that I couldn’t predict, and that is what I enjoyed most about it; I could not just look at it and know where the story was going to take me. The pacing was great also; my hat is off the production for the tense and suspenseful look that they created.

The film had another thing working for it: Harriet MacMasters-Green and Sabrina Jolie Perez, the two actresses who played the mother and daughter respectively. Before this film I had no idea who they were, but I will definitely be on the lookout for them from now on; without their performances, I do not believe that this film could have had my heart pounding the way it did. With MacMasters-Green it was the mother-barely-holding-it-all-together persona she put forth from the beginning that made her character’s final moments authentic, and when it comes to Jolie Perez, let’s just say that she is a terrifying little girl; the calm composure that she maintains throughout the film combined with  a steely stare will make you quiver.

Jeremy Butler is a film school graduate of the International Academy of Design and Technology. He is been writing for Upcomingdiscs since 2012; however, movies have played a big part of his life for much longer. Favorite genres include horror, science fiction/fantasy, and comedy. Favorite movies are V for Vendetta, Boondocks Saints, Kiss Kiss Bang Bang, and The Godfather.
Nashville: The Complete First Season It’s Always Sunny in Philadelphia: The Complete Season 8