Posted in: No Huddle by Gino Sassani on September 19th, 2013 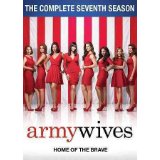 In previous years of reviewing Army Wives I described the show as being somewhat akin to Desperate Housewives but on an Army base where these women are married to soldiers who often find themselves in war zones in the Middle East. I have to say that season 7 is somewhat of a serious transition year for this show, and it is changing significantly both in cast and the way the stories are told. For me, the change is somewhat for the better. Still, I understand I’m not the target audience for this Lifetime series, but we do not have any women on our staff here at Upcomingdiscs. That means you’re stuck with my opinions.

The show used to feature a core of Army wives who called themselves The Tribe and worked together to help each other deal with the realities of Army life. The Tribe is now pretty much gone, and you will not hear that term at all during the season. That’s because more than half of The Tribe are gone or seriously limited in their appearances this season.

Let’s start with the big news. Kim Delaney has left the series, and her character Claudia Joy Holden is killed as the season begins. She apparently had a heart attack off camera, and the first two episodes deal very much with her loss. The surviving characters are all dealing with the death in their own ways, and the episodes are loaded with each character’s best memories of their time with Claudia Joy. Her death remains a pretty huge part of the rest of the season. There are the obligatory “what would Claudia Joy want/do” and a few tears. A couple of episodes deal with the building and dedication of a reflecting pond in her honor. But she will not be the last one to leave. While the rest of The Tribe remains intact during these first two episodes, it all changes once the dust has settled.

Roland Burton, played by Sterling K. Brown, was the male member of the group. His wife was a colonel in the Army. He was a doctor at the local hospital. In this season he takes a job at Johns Hopkins and appears only in the early and later episodes. Roxy LeBlanc, played by Sally Pressman, leaves for good after the first two episodes.

Remaining from the first days is pretty much just Denise Sherwood, played by JAG’s Catherine Bell. She’s married to the platoon leader Frank Sherwood (Serpico). Other returning women are Jackie Clarke, played by Private Practice’s Kelli Williams, Gloria  played by Alyssa Diaz  and Joan Burton, played by Wendy Davis. She’s not really an Army wife, as she’s Roland’s wife and splits her time both at base and in the field.

There are a few cast additions to be had in the “wives” department. Torrey DeVitto joins as Maggie Hall. She’s actually an ex-soldier herself who left to give her husband Eddie (Jenkins) a chance for his career. They have a daughter together and Eddie’s daughter Caroline (Wahlestedt), who is not adapting well to her stepmother. Ashanti joins the cast as Latasha, who has a young boy fighting cystic fibrosis. Holly Truman is played by Elle McLemore. She’s an 18-year-old newlywed who married her high school sweetheart, Tim (McCartney). She’s never been alone before and spends the time making award-winning pies. She turns to Gloria for friendship, and the two become roomies when Tim is deployed.

The biggest shake-up in new cast members comes mid-season. Brooke Shields joins as Air Force Colonel Kat Young. She’s brash and used to getting her way. It’s part of the base expanding to include Air Force personnel for training in order to be battle-ready. Fans are likely a bit split on her eventual romance with Claudia Joy’s widower base commander Michael Holden, played quite nicely by Brian McNamara.

It’s not just the cast that goes through big changes. Because there really is no “tribe”, the show has a larger field of characters and does away with the micro approach to the issues of Army family life. It’s a welcome change for me and why I feel the show no longer reflects a Desperate Housewives style. There aren’t as many schemes, and the focus is far more serious.

The Burtons have to deal with competing career opportunities. Young Tim Truman returns from combat with a bad case of PTSD. He nearly kills his wife during a particularly nasty nightmare. The season does a good job of showing just how changed young soldiers become after they’ve experienced combat. Of course, there are the more mundane but no less important issues of taking care of children, making ends meet, and living a nomad lifestyle. With the more macro view shift of this season, I think these issues are more dramatically portrayed.

It also appears, at least to me, that the season devotes more time to the soldiers in the field than in previous years. Perhaps I’m not really experiencing more actual time as a percentage of the show, but the action is more dramatic and compelling. Towards the end of the season the regulars experience intense conflict as the camp is over-run by over 200 enemy to just 60 Americans. I believe it’s the most intense battle imagery in the series. I know it’s the most effective and moving.

At times the show gets a little too Tyler Perry for me. You always know when these moments are about to start. The music changes and the characters begin to recite their lines in a much too forced and obvious way. They appear to no longer be thinking about their performance and are concentrating more on some moral message or theme. Each episode has these moments, and they really slow everything down for me.

The extras on this release are limited to some deleted scenes and a blooper reel. Fans will appreciate that Tanya Biank appears in an episode as herself. It is her book that the series is based upon.

There’s no question the show is in transition. I expect there’s a lot of chatter among the fan faithful. I’m sure there will be some, like me, who believe this is a vast improvement. Many will not embrace the change with a smile. It seems like only yesterday I was reviewing the first few seasons of the show. “It goes by fast.”

Gino Sassani is a member of the Southeastern Film Critic's Association (SEFCA). He is a film and television critic based in Tampa, Florida. He's also the Senior Editor here at Upcomingdiscs. Gino started reviewing films in the early 1990's as a segment of his local television show Focus. He's an award-winning recording artist for Omega Records. Gino is currently working on his 8th album Merchants & Mercenaries. Gino took over Upcomingdiscs Dec 1, 2008. He works out of a home theater he calls The Reel World. Favorite films: The Godfather, The Godfather Part II, The Body Snatcher (Val Lewton film with Karloff and Lugosi, not the pod people film), Unforgiven, Gladiator, The Lion King, Jaws, Son Of Frankenstein, The Good, The Bad And The Ugly, and Monsters, Inc.
It’s Always Sunny in Philadelphia: The Complete Season 8 Space Junk 3D (Blu-ray 3D)