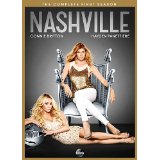 If you’ve ever asked someone, “What kind of music do you listen to?”, chances are you’ve heard the phrase “I like everything…except country.” By that logic, a significant portion of television audiences automatically dismissed ABC’s Nashville as soon as they saw the first commercial for the show (or heard its title). Well those people missed out on an entertaining, flawed drama with an impressive pedigree. Connie Britton and Hayden Panettiere might be the headliners, but the star of the show is usually the great music.

True confessions time: I was one of those “I like everything…except country” people during my more close-minded teenage years. I’m still not what you’d call a country music aficionado, but I am a Friday Night Lights obsessive who would watch almost anything starring Britton. (If the actress signed on for a TV adaptation of Gigli, I’d check out the first five episodes…especially if it co-starred Kyle Chandler.)

Britton, who also serves as a producer on Nashville, stars as Rayna James, the reigning Queen of Country. Unfortunately, her majesty’s latest album isn’t selling quite so well, so Rayna’s label asks her to team up with red-hot superstar Juliette Barnes (Panettiere) for a blockbuster tour. Rayna bristles over joining forces with bratty Juliette, and some of the very best moments in Nashville feature the two actresses squaring off against each other. Rayna and Juliette fight over everything, including Rayna’s long-time lead guitarist Deacon Claybourne (Charles “Chip” Esten), who carries a torch for Rayna and who Juliette sees as her ticket to musical legitimacy. On top of these superstar tussles, the show also portrays the lives of struggling musicians. Avery Barkley (Jonathan Jackson) is determined to become a star at all costs with his alt-country punk brand of music. Meanwhile, his girlfriend (and Deacon’s niece) Scarlett O’Connor (Clare Bowen) is a poet who winds up having more musical chemistry with kind-hearted aspiring musician Gunnar Scott (Sam Palladio).

By now, you’ve probably noticed the show is called Nashville rather than Music City. As a result, the drama also branches out to include some half-baked political intrigue. Rayna’s power broker father Lamar Wyatt (Powers Boothe) wants a mayoral candidate he can control, so he taps Rayna’s husband Teddy Conrad (Eric Close) to run for office. Teddy had been serving as a stay-at-home dad — and living off Rayna’s income — after a colossal business failure. His mayoral race opponent is Coleman Carlisle (Robert Wisdom), a close friend of Rayna’s and Deacon’s sobriety sponsor. Even though these storylines involve good actors, they are easily the least interesting part of the show. (Every time a character mentions the notorious “Cumberland deal,” that’s your cue to go to kitchen and grab a snack.) The Nashville brain trust seems to agree; Boothe and Wisdom have been demoted from series regulars to recurring players for season 2.

Creator Callie Khouri won an Oscar for her Thelma & Louise screenplay. So it’s no surprise her show is centered around two complicated, dynamic, frustrating female characters. Rayna may be the nominal “good guy,” but Khouri and Britton aren’t afraid to show the singer’s stubborn, prideful side (not to mention the way she strings Deacon along). Meanwhile, Juliette could’ve easily been a cookie-cutter caricature. But as the season progresses — and we learn about her hard-luck upbringing and troublesome mom (played extremely well by Sylvia Jefferies) — we understand her maniacal desire to be loved by the masses, even as she treats those closest to her horribly. I may have initially taken the trip to Nashville for Britton, but I ended up staying for Panettiere. The former Heroes actress is fantastic with Juliette’s withering putdowns and more convincing on stage than Britton. (To be fair, Panettiere has some pop star experience; meanwhile, the game Britton is much more of a musical novice, but excels at grounding the show’s inherently soapy drama.) Britton is up for an Emmy this weekend, while Panettiere got snubbed; it should probably be the other way around.

Esten, best known as one of the affable comics on Whose Line Is It Anyway?, is a wonderful surprise as a dramatic actor. He manages to be tender yet convincingly grizzled and cranky. (Which makes Deacon’s season finale meltdown all the more heartbreaking.) I was also impressed by Jackson’s work as Avery Barkley, Professional Jackass. While Close is similarly stuck in a thankless, unlikable role as weak-willed Teddy, Jackson brought an amusing amount of flair to his portrayal of a conceited jerk — Avery basically commits career suicide in Ep. 15 — and is rewarded with a positive character makeover that feels earned. Not surprisingly, real-life musicians pop up as guest stars (J.D. Souther as a kind mentor; Wyclef Jean as a pushy label head) and in cameos as themselves (Brad Paisley, Vince Gill). Among the non-musical guests, I was impressed by Michiel Huisman as Liam McGuinnis, the brash rocker who pushes Rayna out of her musical comfort zone. However, I was most intrigued by the late-season addition of Chris Carmack — a series regular for season 2 — as Will Lexington, another aspiring musician. Will is willing to hide certain things about himself to become a country music star.

Khouri tapped husband T-Bone Burnett — responsible for the great music in O Brother Where Art Thou and an Oscar winner for Crazy Heart — as the executive music producer for Nashville. The result is a wonderfully eclectic blend of covers (The Lumineers’ “Ho Hey” performed by Rayna’s daughters), pre-existing songs (The Civil Wars’ “If I Didn’t Know Better”), and original compositions written for the show by real-life Nashville musicians (“Undermine”; also, good luck getting the arena-ready “Wrong Song” out of your head). The standout is the breathtaking “If I Didn’t Know Better,” which closes out the pilot and effectively introduces the world to Bowen’s ethereal, unforgettable singing voice. Most importantly, the great majority of these musical sequences play out in organic ways — recording sessions, performances at The Bluebird Café — that don’t feel forced. (Cough**Glee**Cough)

Nashville: The Complete First Season includes all 21 episodes on five discs. Special features include deleted scenes, bloopers, and a trio of featurettes. These include a set tour by charismatic YouTube sensations the Stella Sisters (who play Rayna’s daughters), a behind-the-scenes look at two of the show’s songs, and a mini-doc focusing on the Music City locations. (The fact that Nashville actually films in Nashville is a major plus.)

To be honest, Nashville should be even better than it is. To that end, there are some significant changes on the horizon for season 2, which premieres Sept. 25. Besides the aforementioned casting news, Burnett won’t be returning for the second season, which is potentially a big loss. Season 1 ended with flurry of insane cliffhangers — surprise proposal! surprise pregnancy!! potentially deadly car accident!!! — and I’m interested to see how those story threads (and the show’s inconsistencies) are addressed the second time around.

Hammer of the Gods (Blu-ray) The Haunting of Helena