Posted in: Disc Reviews by Gino Sassani on September 19th, 2013 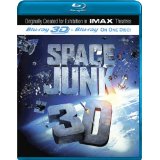 “After a half century of space exploration we’re now being faced with what’s long been a staple of science fiction: an orbiting junkyard of space debris.”

There’s an old saying that what goes up must come down. For most of human history that has been a pretty steadfast axiom. Of course any kid who has ever had a kite or a football stuck in a tree knows there are exceptions to every rule. But in the 1950’s we began to place objects in orbit about the Earth. In recent decades the practice has almost become a frenzy. We have all of those cell phones, television networks and GPS devices that require more and more satellite support. It appears that the rule itself has changed. The fact is there are hundreds of thousands of “whats” that have gone up and will not come down at all, at least in our lifetimes. Space Junk 3D examines the ramifications of all of this floating space debris.

The short film begins with a visit to a crater in the southwest. The result of a collision from space, the crater measures a full mile across and two and a half miles in diameter. It’s 50,000 feet deep, an ancient reminder of the forces that once took part in shaping our primitive planet and the devastation such an impact might have today. But it’s not Earth impacts that really concern us here. The setting is used more as a way to introduce us to Don Kessler.

With all of those objects floating around in space and orbiting at speeds of up to 1700 miles an hour, collisions are inevitable. That brings us to the theories of Don Kessler and his Kessler Syndrome. His idea is that all of these random collisions will eventually lead to a cloud of dust and debris so thick that it could literally shut us off from the ability to venture out into space at all. Of course, this is somewhat down the road. But this film is a cautionary tale, a warning of sorts that we may not be as far away as we think.

The film uses mostly computer-generated simulations to demonstrate the ideas behind the theory and also to animate the busy skyways. The stuff is pretty much on par with the kind of demonstrations you’ll find in places like A&E’s Universe series. There isn’t really much live-action space footage here. The entire feel is akin to something you might catch at your local science museum, particularly if it has an IMAX theater. I’m sure that is where the documentary had its initial run.

The film is narrated by Tom Wilkinson who played ol’ Ben Franklin in HBO’s series John Adams. He has that authoritive British voice that always makes these kinds of things sound serious enough to demand our attention. It’s short and a bit light on content, spending more time than usual examining the CG animations. A long one demonstrates the hypothetical collision of two galaxies, presumably ours and Andromeda. Don’t worry, that’s really a long way off, if it happens at all. It’s harmless enough but light both on entertainment and education.

If you do not yet have a 3D player or television, the disc also contains the standard 2D Blu-ray version of the film.

Space Junk is presented in an aspect ratio of 1.78:1. The high-definition 3D image is arrived at using the standard duel MVC codec at an average 25/14 mbps. All of this is direct computer animation or pretty modern documentary cameras. That means you’re going to get a solid picture without issue. The information is there and it’s sharp and bright. Colors are often bright and distinct. Black levels are just fine, although there really isn’t much need for the likes of impressive shadow definition here. This was originally an IMAX presentation.

The DTS-HD Master Audio 5.1 is there almost exclusively to provide the rich tones of Wilkinson’s narration. There are some occasional surround elements, but they never really dominate the mix.

Interview With Tom Wilkinson: (1:32) He mainly addresses his reasons for doing the job.

Behind The Scenes Video: (2:43) SD Melissa Butts takes us on a very brief look at the film’s production. Unfortunately, even at just under three minutes there is recycled footage from the Wilkinson interview feature.

There are also photo galleries provided.

If you think you’ve got it bad coming home in rush hour traffic, you ain’t seen nothing yet. The film certainly brings home the point that Earth’s orbital space is crowded and not getting any better. The film doesn’t really offer any solutions to the problem, leaving us with those images of collisions and maybe millions of pieces of debris all circling over our heads. “That’s a whole lot of junk.”

Gino Sassani is a member of the Southeastern Film Critic's Association (SEFCA). He is a film and television critic based in Tampa, Florida. He's also the Senior Editor here at Upcomingdiscs. Gino started reviewing films in the early 1990's as a segment of his local television show Focus. He's an award-winning recording artist for Omega Records. Gino is currently working on his 8th album Merchants & Mercenaries. Gino took over Upcomingdiscs Dec 1, 2008. He works out of a home theater he calls The Reel World. Favorite films: The Godfather, The Godfather Part II, The Body Snatcher (Val Lewton film with Karloff and Lugosi, not the pod people film), Unforgiven, Gladiator, The Lion King, Jaws, Son Of Frankenstein, The Good, The Bad And The Ugly, and Monsters, Inc.
Army Wives: The Complete Seventh Season Prisoners