Posted in: No Huddle by Brent Lorentson on September 25th, 2013 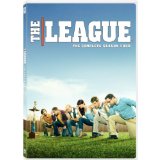 Football season is well on its way, and that can mean one thing; fantasy football players are at their computers making trades and setting up their lineups.  For some fantasy football is nothing more than Dungeons and Dragons for adults who like football, but those that have their own league, well, you know how cutthroat things can get once your star receiver is injured and that perfect replacement just hit the waiver wire.  The F/X (now I think FXX) show The League may take more than a few jabs at those who take fantasy football a little too seriously, but for myself this is one of my comedies on the air right now.

Considering this is an ensemble show where the laughs and plot lines are well spread throughout the core six, perhaps it would be better to run down the cast.  Pete (Mark Duplass) who is the league’s three time champion, Ruxin (Nick Kroll), Kevin (Stephen Rannazzisi) Pete’s best friend, Jenny (Kate Aselton) Kevin’s wife, Andre (Paul Scheer), the socially awkward one of the bunch, and then there is Taco (Jon Lajoie) Kevin’s brother.  Even though this band of friends seem to care a great deal for each other, feelings are easily put aside when it comes to the league or making a joke at the other’s expense.

Season 4 kicks off with Training Camp where the gang has to travel to Dallas where they get to take in some of training camp while Taco settles a deal with the Cowboys owner involving a website Jones wants the rights to.  Though what kept me laughing was the competiveness between the friends over the naming rights to Kevin’s  soon-to-be-born son.  If you don’t see the humor in the son being sired with the name Chalupa Batman, well perhaps this show may not be for you.  For those who did crack a smile at the name, well, you’re in luck, because the laughs keep coming.

In Bro-Lo el Cordero Kevin gets a colonoscopy, and it is suspected that while he was under Andre may have possibly taken advantage of him and his lineup.  Whether it’s the reaction Kevin has to seeing the camera that is going to be used inside him or seeing Pete deal with his cheating father (played by Robert Wagner) at a nursing home, the laughs are pretty solid throughout.  But the episode that stands out as my favorite is a tossup between The Vapora Sport and 12. 12. 12.

The Vapora Sport has Pete shopping for some shoes so he can start running again, and he loses out on the last pair of Vapora sports to a man in a wheelchair (J. B. Smoove).  While at the same time Ruxin discovers Taco has a dog that he has conditioned to know when someone has had sex, Ruxin wants to use the dog to see if a co-worker at his firm is having sex at the office, and, well, let’s just say things escalate when they lose the dog in the office.  Factor in Kevin trying to get rid of a piano that plays a racist tune from the past and the result is non-stop laughs from start to finish.

12. 12. 12 starts off with Andre attempting to do a MTV Cribs episode for himself, showing off his new pad; he’s hired an interior decorator to help furnish the place but she is also his girlfriend.  Add into the mix how Jenny is trying to sell Andre’s old place to Dion Sanders.  But the real highlight of these episodes is seeing Jenny and Kevin’s daughter react to a video Jenny posts while trashing-talking her husband, since this is the week the two are matched against each other.  And if that were not enough, there is the brief appearance of Seth Rogan as Dirty Pete and Rafi as they are filming a porno about the end of the world.

Sure some people will look at The League and feel it’s a bit childish and too raunchy for its own good (my girlfriend would fall into this camp).  But beyond the potty jokes and football references, this is still a solid show about friends coming together over something they enjoy.  It explores the hardships of marriage and being parents, all while trying to have a life of your own to escape and have fun.  One thing is certain, this upcoming fifth season I’m programming The League into my fall lineup of shows to watch.

Brent Lorentson is a horror writer and film critic based out of Tampa, Florida. With a BA in Digital Film, he co-wrote and co-directed Scavenger Hunt. His short stories have appeared in various horror anthologies. In 2019 his short script Fertile Blood will be a part of the anthology horror film Slumber Party. He is currently working on his first novel A Dark and Secret Place set to be released in late 2019. Favorite Films: Taxi Driver, Fight Club, I Saw the Devil, The Wild Bunch, Dawn of the Dead, A Clockwork Orange, Pulp Fiction, Heathers, The Monster Squad, and High Fidelity.
2 Broke Girls: The Complete Second Season Dark Girls