Posted in: The Reel World by Jeremy Butler on September 29th, 2013 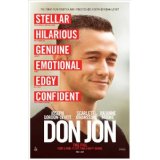 I have to say, I didn’t see that last one coming the first time I saw the trailer. Another thing I didn’t see coming when I first heard about the film, that it was the feature film directorial debut for actor Joseph Gordon-Levitt. Quite the illustrious career Gordon-Levitt has had; I knew he had been around the block as far as acting goes, but I had no idea of his list of accomplishments until after I consulted IMDB; the man has over sixty acting credits to his name and has been part of some of the biggest and innovative films in recent years. So it would seem that the only viable question about him taking on the responsibility of the director’s chair is, why didn’t he do it sooner? I suppose the correct answer to that question would be he was waiting for the perfect script to make his debut. Well you know the old adage, if you want something done….

Queue Barbara Sugarman (Scarlett Johansson), the devil in the red dress. From the moment, Johnny lays eyes on her, he is resigned to follow her down a path that he has never had to go down. Suddenly before he even realizes, he is in a committed relationship. Despite this, Johnny actually finds that he enjoys being attached to someone for more than one night, and his priorities start to change. However there is one priority that does not change until one faithful night when he is caught with his pants down (no pun intended). Thoroughly disgusted, Barbara is ready to head for the hills, and though Johnny is able to stop her, keeping her will require a great sacrifice of on his part. Will he be able to give up fantasy for the real thing?

I’m not really sure if the sound of an Apple computer booting up will ever be the same for me again. I should probably preface this with a warning: for those of you who are squeamish about seeing or talking about sex, this movie is not for you; the film does not shy away from its source material, and believe me you do get an eyeful, so wear your thick skin. Which is not to say that the film is simply sex, sex, sex (though that is a big portion); the story actually turned out to be very insightful with a great character arc for the lead.

Not only did Gordon-Levitt write a hilarious screenplay on a subject that most likely comes up in every relationship of this day and age; as the director he brought it to life in such a lifelike way that it felt more like something that could easily be experienced off screen as well as on screen. Formatting it to fit in the form of the lead’s weekly schedule of cleaning his apartment, going to church with his family, working out in the gym, and taking woman back to his place after hitting the club gave the film a truly authentic quality. I expected the continuous and constant cycle to become tedious after a few go arounds, but thankfully Gordon-Levitt prepared for this; the deeper Jon gets into his relationship with Barbara, he casually alters one aspect of Jon’s routine with every cycle, which highlights how a person’s priorities change when they enter a committed relationship.

Now going in there was one thing I simply expected to be great. I expected that the chemistry between Gordon-Levitt and Johansson to be off the charts, and though it does start off that way (the back-and-forth during their lunch date was everything I hoped for), it was not the best chemistry that I saw. The best was between Gordon-Levitt and Julianne Moore; the evolution of their relationship is what drove the story forward. There is another pair’s chemistry I would have to rank above the two leads and that is Gordon-Levitt and Danza as father and son; not only was it great to see Danza again in something far different from what he had been seen in the past, but it was wonderful to see him reconnect with an old colleague and deliver a few laughs.

Jeremy Butler is a film school graduate of the International Academy of Design and Technology. He is been writing for Upcomingdiscs since 2012; however, movies have played a big part of his life for much longer. Favorite genres include horror, science fiction/fantasy, and comedy. Favorite movies are V for Vendetta, Boondocks Saints, Kiss Kiss Bang Bang, and The Godfather.
Rush The Neighbors: The Complete First Season