The Neighbors: The Complete First Season 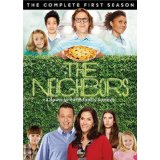 Suburbia has always been presented as an otherworldly place to city folk. In The Neighbors — ABC’s underrated gem of a sci-fi sitcom — a New Jersey family moves from the city to the suburbs and discovers their new community is comprised entirely of placid, color-coordinated aliens. Each episode delivers fish-out-of-water planet laughs and a lesson in what it means to be human, in all our imperfect glory.

“So, we’re just living amidst a cult of golf-cart-driving pie makers with the names of professional athletes?”

The Zabvronians, we learn, first landed on our planet 10 years earlier and settled in suburban New Jersey while awaiting contact from their home planet. The aliens also decided to name themselves after famous professional athletes because they represent Earth’s finest physical specimens. As a result, the Zabvronians are led by Larry Bird (Simon Templeman) and his family, which includes dutiful wife Jackie Joyner-Kersee (Toks Olagundoye), Asian teen Reggie Jackson (Tim Jo) and wise, precocious redhead Dick Butkus (Ian Patrick). By the end of the first episode, the aliens have already revealed their true selves to the Weavers, and Larry has convinced the panicked humans to stay put based on the idea that there’s a lot the two families can learn from each other. The Weavers can benefit from having a presumably higher life form around, while the Bird-Kersees can learn how to slowly branch out to the rest of their new home planet.

The Neighbors hasn’t set out to reinvent the comedy wheel. A lot of the alien antics on this show have previously been covered by the likes of Mork & Mindy, ALF and 3rd Rock from the Sun. (Or, as Jackie puts it, “You have so many holidays for us to screw up.”) Fortunately, creator Dan Fogelman and his writers have proven to have both a sharp satirical eye and a healthy amount of self-awareness about their own formula. In fact, Larry casually monologues the show’s entire premise in Ep. 16/“Mother Clubbers”: “We are a family of aliens living amongst humans. And every week we tackle a new problem together and learn that, while we may be from different backgrounds – even planets – family dynamics are, in fact, universal. It’s real life kids, it’s not TV.”

Ordinarily, I’d worry about the long-term prospects of a show like The Neighbors — it’s going to be hard to top the sitcom’s twisted take on Halloween, Thanksgiving and Christmas, for example — but the writing and acting is good enough across the board for me to believe that they’ll figure it out. The clever decisions range from the sneaky good (like making the human family the outsiders on their own planet) to the more obviously funny, including the show’s never-ending string of sight gags. (Let’s just say the aliens have a different method for doing their dishes and that a child being “suspended” or “grounded” doesn’t mean what they think it means.) The Zabvronians also serve as a great way to highlight the absurdity of human behavior. (Like the fact that we celebrate Oscar winners more than Nobel Prize winners; the aliens also turn their bathrooms into gardens because it doesn’t make sense to have their bedroom next to a sewer.) To be fair, the writers also aren’t totally above making a “your anus”/”Uranus” joke.

Templeman is very funny as the snobby and perpetually cranky Larry, but the show’s breakout star is Olagundoye, who does Emmy-quality work here. The Nigerian actress delivers Jackie’s ridiculous lines with bug-eyed aplomb and has proven to be great with accents. (Her Jersey accent when Jackie tries to act like a “Real Housewife,” and her southern accent when she tries to Blind Side a less-fortunate kid were equally hilarious.) Gertz and Venito squeeze more juice than you’d expect out of their exasperated straight man roles thanks to Debbie’s casual booziness and Marty’s comical emasculation. The young performers also shine, though I’m again partial to the Zabvronians. Patrick has a great, unpredictable deadpan delivery as young Dick Butkus, while Jo’s eager, lovelorn Reggie Jackson — who eventually falls for Amber — would’ve been right at home as the hero in a John Hughes movie. Speaking of Amber, Mamet has the most thankless role, playing the most aggressively unpleasant person in the cast.

My favorite episodes — besides the ones that involved holiday hijinks — were Ep. 3/“Things Just Got Real” (if only for Olagundoye’s glorious “Real Housewives” impression), Ep. 14/“The Back Nine” (the aliens learn about the existence of different races), Ep. 16/“Mother Clubbers” (which, among other topics, tackles the phenomenon of hot TV wives with schlubby husbands). Episodes 17 and 20 (“Larry Bird Presents an Oscar-Winning Film by Larry Bird” and “Sing Like a Larry Bird”) also hit my personal sweet spots as Larry attempts to build the perfect Oscar-winning film and the Zabvronians stage a musical, respectively. Guest stars include Stacy Keach as Marty’s harsh dad, and director Michael Bay in a funny cameo as himself in “Mother Clubbers.” Also, George Takei and Mark Hamill briefly pop up in the season finale to take good-natured Star Trek/Star Wars-related digs at each other.

The DVD set includes all 22 episodes on three discs, as well as deleted scenes and a gag reel. I didn’t watch The Neighbors during its broadcast run last year, but I now feel the show deserved its spot on ABC’s strong Wednesday night comedy block. (Alongside The Middle, Modern Family and Suburgatory). So while I was happy to learn season 2 is already on the air, I was also disheartened to find out the show has been moved to Friday nights. Regardless of when this show airs, you’d do well to give this strange, funny, witty sitcom a look. “You’ve got good neighbors now.”