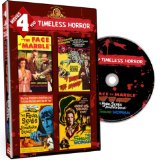 31 Nights Of Terror is in full swing. That means ghostly giveaways. Thanks to the ghoulishly great folks at Timeless Media Group we have a simply horror-able 4 movie collection to give away on DVD. You get The Face Of Marble with John Carradine, I Bury The Living with Richard Boone, The Four Skulls Of Jonathan Drake with Grant Richards and The Snake Woman with Susan Traver. That’s over 5 hours of horror. Chilling isn’t it. Are there more contests to come? You’re bloody well right there will be.

You can check out other Timeless Media Group collections.

Gino Sassani is a member of the Southeastern Film Critic's Association (SEFCA). He is a film and television critic based in Tampa, Florida. He's also the Senior Editor here at Upcomingdiscs. Gino started reviewing films in the early 1990's as a segment of his local television show Focus. He's an award-winning recording artist for Omega Records. Gino is currently working on his 8th album Merchants & Mercenaries. Gino took over Upcomingdiscs Dec 1, 2008. He works out of a home theater he calls The Reel World. Favorite films: The Godfather, The Godfather Part II, The Body Snatcher (Val Lewton film with Karloff and Lugosi, not the pod people film), Unforgiven, Gladiator, The Lion King, Jaws, Son Of Frankenstein, The Good, The Bad And The Ugly, and Monsters, Inc.
The Little Mermaid: Diamond Edition (Blu-ray) So This Is Christmas