So This Is Christmas

Posted in: No Huddle by Brent Lorentson on October 3rd, 2013 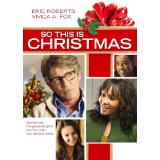 It’s only the first of October, and already the Christmas spirit is being thrust upon us.  It’s not that I’m trying to be a Grinch about it, but for me my true Christmas is in October when we get to celebrate the ghouls and goblins that lurk in the shadows.  But I did what I could not to let the season we’re in get in the way of a movie; after all, Die Hard was a Christmas movie in the summer; same goes for Iron Man 3.  Sure, those are action titles, but they are still great no matter what time of year you watch them.  So perhaps So This Is Christmas may turn out to be this under-theradar gem that will surprise me.

Things open up with a brief flurry of excitement as a young man and woman are rushed into the hospital suffering from multiple gunshots. Ashley (Lexi Ainsworth) is pulled aside by an officer to get her statement about what she saw; instead of just a statement about the shooting instead her story starts further back, explaining her early party days, and so the story really begins.

Ashley is a bit of a wild child, always staying out late and hanging out at bars with her friend Nicole (Cassidee Vandalia).  Ashley does all she can to stay away from home, where her stepmother, Sharon (Vivica A. Fox) looks down upon Ashley but praises her son Jason (Titus Makin Jr.) who she believes is a star athlete.  But of course Jason has just as many issues as Ashley, only he is better at hiding them till his drug use starts to get out of hand and he starts to steal money from his parents.  Eric Roberts plays Bill, the levelheaded father trying to keep his family together but can’t seem to catch a break.  That is until Mac (Bryan Massey) strolls through the neighborhood offering to repair the home, though he intends to fix more than a few cracks in the wall and is intent on saving this family.

Mac’s prime focus is on Ashley, though; he sees she is just a sad, lonely girl who just needs a little direction, and to help out with that he asks her to help him put together a play for underprivileged kids.  Just what will the play be about? Well, that’s up to Ashley to decide once he tells her to read a chapter of Luke in the Bible and write up a script with 17 parts.  And this is where the film lost me to a point.  I’m fine with the movie-of-the-week approach to tell the dangers of drug and alcohol abuse with teens, especially those coping with broken homes.  But once that religious message starts to rear its head, it becomes a bit much.

As Ashley manages to get her life on track, Jason seems to only spiral out of control, becoming more in debt to drug dealers and then getting hit with the news his long-time girlfriend Angelina (Danielle Vega) is pregnant.  You’d hope this would help knock some sense into Jason, but instead he just continues on the path to screw his life up as much as he can.

The film is by no stretch of the imagination more than an anthem against drug and alcohol abuse and having God pull you out of this dark hole of despair.  What I didn’t expect, though, is that it’s not half bad either.  It’s the cast that brings this together and gets you to care about these people despite shots where the boom mic decides to photo-bomb a scene.

The story isn’t complicated at all, and once it jumps back to the brief interrogation in the hospital, I’m amazed the officer didn’t launch over the table and arrest her for dragging the story along about twenty minutes too long.  Even the final scene where the line is uttered “So this is Christmas.” My eyes couldn’t help but roll from the cheesiness, it’s an insert that does nothing but fit the title into the film.  If not for the solid performances throughout the film, I’d leave this film with nothing more than a lump of coal in their stocking.

Brent Lorentson is a horror writer and film critic based out of Tampa, Florida. With a BA in Digital Film, he co-wrote and co-directed Scavenger Hunt. His short stories have appeared in various horror anthologies. In 2019 his short script Fertile Blood will be a part of the anthology horror film Slumber Party. He is currently working on his first novel A Dark and Secret Place set to be released in late 2019. Favorite Films: Taxi Driver, Fight Club, I Saw the Devil, The Wild Bunch, Dawn of the Dead, A Clockwork Orange, Pulp Fiction, Heathers, The Monster Squad, and High Fidelity.
“31 Nights Of Terror” Contest – Win Timeless Horror 4-Pack Barabbas (Blu-ray)