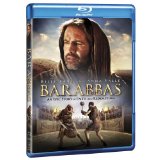 Although he’s only mentioned briefly in the Bible, the man known as Barabbas was a key figure during the crucifixion of Jesus Christ. According to the Gospels, Pontius Pilate gave the crowd in Jerusalem the choice of either sparing Jesus’ life or saving the rebel/thief Barabbas during Passover. (No “Spoiler Alert” necessary; I’m sure you can guess which one they picked.) Since very little is known about Barabbas, his life story has basically been transformed into the first documented case of “survivor’s guilt.”

Swedish author Par Lagerkvist won the Nobel Prize in Literature in 1951, the year after the release of “Barabbas,” his best-known novel. The book was most notably turned into a 1961 film starring Anthony Quinn and directed by Richard Fleischer. “Barabbas” has most recently been adapted into this intriguing, wildly-uneven (and occasionally painful) two-part miniseries, which debuted on ReelzChannel in March.

The miniseries opens with the moment that changed Barabbas (Billy Zane) forever: the residents of Jerusalem unanimously decide to spare his life in favor of seeing Jesus Christ (Marco Foschi) get crucified. From there, the action jumps back three years, and most of Part 1 chronicles the events in Barabbas’ life that led to him standing side-by-side with Jesus on that fateful day. This includes his unconvincing, rollercoaster courtship of Esther (Cristiana Capotondi), a servant in Barabbas’ preferred brothel who becomes a devout follower of Christ. Barabbas also eventually falls in with a group of Zealots led by Kedar (Hristo Shopov), who seek to strike back against the oppressive Roman rule of Pontius Pilate (Filippo Nigro). Part 2 of the miniseries is naturally more brooding and finds Barabbas struggling to understand what he’s supposed to do with a life he doesn’t feel he deserves to be living.

In the Gospel of Matthew, Barabbas is referred to as a “notorious prisoner” who was part of the insurrection against Rome. That’s obviously not a lot to go on, but subsequent stories have fashioned a compelling portrait of a violent, angry, godless man who was incapable of displaying faith because he was never taught how to believe. (The miniseries alludes to Barabbas’ violent upbringing more than once.) There are other interesting ideas at play here — is it possible to achieve peace without violence? — but too much of this miniseries winds up playing out like a low-rent, biblical version of Rosencrantz and Guildenstern.

And just like those two minor characters from “Hamlet” became the stars of Rosencrantz and Guildenstern Are Dead, Barabbas is this film’s main attraction, even as the life of Jesus and other notable biblical events play out on the margins. I personally don’t mind the inclusion of iconic moments like Jesus turning water into wine or Lazarus rising from the dead. The problem is this production’s relatively modest $5 million budget inevitably makes those moments seem cheesy. On top of that, the appearances by Jesus don’t come often enough to be truly substantial. Director Roger Young (who previously directed Jesus, a 1999 TV movie starring Jeremy Sisto) puts forth an admirable effort, but his staging of these big moments can’t help but pale in comparison to some of his more lavish predecessors.

You can probably tell from most of the cast’s last names that this is an Italian production. Unfortunately, none of the actors seemed to have a strong enough command of the English language to give convincing performances, and their work turns out to be distractingly poor across the board. Capotondi and Anna Valle (as Pontius Pilate’s wife, Claudia) are particularly painful, especially when they’re in the same scene. Of course, all of this serves to make Zane look a littler better than he probably is. The actor wears a gloriously scraggy wig and hams it up when he’s playing Barabbas as a scoundrel, but is actually more effective when he’s conveying the more conflicted, beaten-down side of the character. Shopov, who looks like a poor man’s Stellan Skarsgard, is the only other actor who really impresses, so it’s a shame he’s not in the movie for very long.

Overall, I actually enjoyed the sillier, table-setting Part 1 more than the not-quite-as-silly, but more dour second part. Not only does the first segment have more action — the hand-to-hand combat is effective, even though it comes off as overly choreographed — but the director seems to come alive most when he’s staging moments for this portion of the film. (This includes a meeting between Barabbas, Kedar and others that plays out like a mini-heist film.) The repetitive Part 2, on the other hand, is obviously more dramatic and explores some interesting concepts, but it also appears to come up short on content. (Part 2 is about 30 minutes shorter than Part 1, yet this final segment still resorts to re-using flashbacks and other clips we’ve already seen.)

Barabbas also plays it fast and loose with its time period: the story seems to take place over a significant number of years (maybe decades), yet all the characters remain visibly unchanged except for Peter. This miniseries also takes place over a significant period of time — the three-hour running time doesn’t exactly make this a breezy watch — but you’re likely to remain similarly unaffected by this commendable, ultimately forgettable effort.

Barabbas is presented in its original aspect ratio of 1.78:1. The 1080i image is arrived at with an AVC MPEG-4 codec at an average of 25 mpbs. The bulk of this film is presented in the sort of bright, sandy palette that is familiar to fans of biblical epics or sword-and-sandal films. As a result, contrast is generally high (almost certainly by the filmmaker’s design) and flesh tones are nice and warm. Unfortunately, the image is noticeably inconsistent in terms of its sharpness: wide and medium shots are fair, at best, and feature a pleasing amount of grain; meanwhile some extreme close-ups of the actors are almost jarringly vivid and detailed. There is also a brief nighttime sequence in Part 1 (where Barabbas is almost burned to death) that looks shockingly bad due to crushed blacks and heavy noise. Luckily, that scene is an anomaly. This is a solid visual presentation that appears to have been hampered by the film’s low production values rather than this Blu-ray.

The DTS-HD Master Audio 5.1 track is quite aggressive in every respect, including the way it presents Paolo Vivaldi’s grand score as well as random sound effects. (The film opens with Barabbas being thrown on the ground in slow motion, which elicits an almost comically thunderous response from the subs.) Still, I did appreciate the amount of immersion on this track; much of the action takes place outdoors, which allows for a wide variety of ambient noises. Dialogue was pretty clear and intelligible, though there are some pretty noticeable synch/looping issues involving everyone in the cast who is not Billy Zane.

The lack of special features for this relatively little-seen miniseries isn’t a complete surprise, but it’s still a bit of a letdown when you consider the fascinating subject matter. I can see Barabbas serving as a useful introduction to the Passion of Christ for those who aren’t familiar. (Just make sure you don’t take this miniseries as gospel.)

The shorter Part 2 is actually where the meat of the story resides. But by the time we reach that point, the miniseries has been almost completely undercut by shoddy acting and filmmakers who didn’t have the tools to tell this story in a completely believable way.