Posted in: Disc Reviews by William O'Donnell on October 12th, 2013 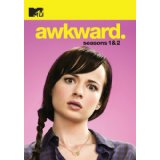 Jenna Hamiton (played by Ashley Rickards) is looking to make a great impression in high school but things get off to a dreadful start. After breaking her arm in a bathroom accident (sounds less gross than it is), rumors spread throughout her new school that she attempted to commit suicide. She has plenty of attention but not the sort she wanted. Now her quest is to take the misunderstanding and turn into an opportunity to shine. Cris-attunity! (as Simpsons fans would say).

This shows sets itself up to resemble a teenage Sex and the City, with the main character’s narration coming from her writing. Jenna has a blog whose name was “Invisible Girl” until she took an optimistic turn and renamed it “That Girl Daily” (by Season 2 she reveals her true name in the blog’s name and continues to post with total exposure). This is the thesis for the show and the method in which it tries to be relatable. Teenagers do not want to be invisible, but they don’t want to be an embarrassment either. Jenna is this statement in a nutshell. She lost her virginity at summer camp, but the boy she lost it to ignores her until she takes a stand (or a stage, more accurately) and owns her own awkwardness. From that point on she hurdles over and around the odd machinations of her friends, family and oddball guidance councillor.

Most all of her validation comes from social media. That is her acid-test. Jenna challenges herself to advance her social status, and awaits the results by way of how many “Friend Requests” she gets online, or what sort of responses she gets from boys through texts and such. I suppose there are some decent lessons to be learned in this show, and I do realize it is a satire that is simply reflecting the trends of contemporary teenage behavior, and it isn’t meant to be taken at face value, but many viewers may not catch onto all of this and therefore could be swayed to thinking that their connection with social media is more significant than it should be. It’s all well and good for people to share their thoughts by way of things like a blog, but more stock should be put into person to person connections. As a sign of growth, less social media is used by Season Two…so gold star Awkward.

For better or for worse, season two emphasizes said growth of person-to-person connections by focusing on a battle between Jenna’s two boy toys Matty and Jake. The battle stretches from Season One and moves across all of Season Two. A highlight of Season Two is the second last episode that explores various “What if” scenarios to see how each decision regarding which boy she might choose would play out.

This the the sort of fast-talking, nu-slang heavy (OMG becomes a word, for example) teenage comedy we’d expect in a post-Juno world. The actors are capable of delivering their one-dimensional characters with skill, Ashley Rickards has a certain Jennifer Lawrence-esque appeal, and the plots are bubbly without getting too terribly annoying…though being a hetero male in his twenties and NOT a 14-year old girl meant my patience was tested a few times per episode.

Widescreen 1.78:1. The colors are quite bright. The picture quality is a touch fuzzy throughout. The exterior shots that are in the California sun are clearer than the interiors, but any dark scene gets a bit muddy in appearance.

Dolby Digital Stereo. There is not a lot of dynamic effects or scoring so Stereo seems sufficient. Everything comes through with plenty of clarity. No major errors to note.

Webisodes:
V-time: Desi Lydic as school Counselor Valerie Marks. She offers quirky (and terrible) advice to youngsters. Amusing if you like her kind of schtick.

Sadie’s Anger Management: Molly Tardov as Sadie Saxton, the richest kid in school who has gained popularity by bribery or by force. Here she offers very (thankfully) quick rants about things that make her mad. A character we’d love to hate….and I do.

Morning Announcements: Brett Davern as Jake Rosati does a mock version of his school’s morning announcements. Each of these feature another character from the show, attempting to bring some extra comedy. These are also mercifully short.

Behind-the-scenes: Chapterized into a 9 parts, we see the cast give mini-tours and answer silly questions about their own “awkward” moments, character relationships, and hijinx amongst the actors. I found it amusing when they, as so many tv actors do, that the entire cast gets along like a fun family and while we do see shots of them saying friendly things to each other, their body language demonstrates next to zero chemistry between them. One actors even shyed away from any body contact while another moved in for some sort of hug or shoulder touch, I could not tell exactly. The lone excpetion to this is the so called “bromance” between actors Beau Mirchoff and Brett Davern, who seem able to share each other’s person space with a decent amount of gratification.

Character Intros: Different members of the cast and the show’s creators chime in on the main character’s qualities and attributes. Not exactly a majorly academic examination of character types. But I guess a discussion of Jungian archetypes may not be necessary when examining an MTV made satire about quirky teenagers.

About the Show: Like the character intros featurette, this is a light commentary about the show in the most general sense. I’m pretty sure I figured out it was a TV show when I held the DVD case in my hands…I didn’t really need this feature to remind me. I feel like I should note that of all the interviewees, Brett Davern seems to be the most on-the-ball.

Behind-the-scenes: Kicks off with a chapter about the wardrobe department. This show’s costume designer puts in a lot of creative thought into how these characters would appear and succeeds.
The remainder of this featurette is a lot of fan service (literally, as fans appear in in a few portions) with promos and light hearted questions.

Webisodes: Just as they were in the first season features. This time only V-Time and Morning Announcements return.

Shows like Teen Mom made the prospect of any future show that had to do with teenagers being made by MTV a terrifying idea. This show demonstrates that as long as MTV stays away from Reality TV (with the same fervor in which they avoided music) then things could be ok.