Posted in: The Reel World by Archive Authors on October 16th, 2013 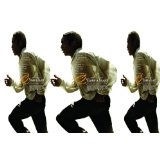 Benedict Cumberbatch (William Ford) is another “owner” of Northup but is also a Baptist preacher. His clear conflict with the hypocrisy of his situation is far more evident. He participates in a system he has a clear distaste for but still feels unable to change. Alfre Woodard (Harriet Shaw) is a mistress and de facto wife of another plantation owner which allows her to distance herself from the beatings and brutality in her own past. Brad Pitt, one of the producers of the film, plays an abolitionist carpenter from Canada working on the Louisiana plantation. Pitt (Samuel Bass) expresses the fear he feels. He speaks his mind and aids Northrup but knows full well it is a dangerous game.

Chiwetel Ejiofer (Samuel Northup) has always displayed exceptional brilliance as an actor over the last decade, but the real breakout is newcomer Lupita Nyong’o (Patsy) as a radiant yet tortured slave.