Posted in: Disc Reviews by Gino Sassani on October 16th, 2013 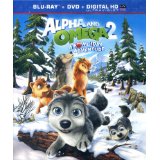 Direct-to-video sequels of successful animated films are tricky at best. The video release is usually a sign that either the studio is trying to cash in quickly on the franchise or they are just not confident enough in the sequel to put it up on the big screen, usually with good reason. Smaller budgets mean less impressive animation and a lack of A-list voice actors. Every studio has been guilty of one or the other and more often both. But what’s the story when the original film made a disappointing $25 million at the domestic box office? That usually signifies that a sequel of any kind is not likely in high demand. Such is the quandary of Alpha & Omega 2: A Howl-iday Adventure.

The original film wasn’t near as bad as the box office figures would have you believe. It was pretty much an average computer-animated feature film. It had a very solid voice cast that included such talent as Justin Long, Danny Glover, Dennis Hopper and Christina Ricci. It just didn’t have a lot of punch to it, and it fizzled. I’m not sure how anyone thought that this one would have any more heart or punch after you take away the great talent and substitute relatively unknown names. That doesn’t mean untalented, by any means. They do pretty much what’s expected of them here. I just wish I could say it was entertaining.

The first film dealt with the characters of Humphrey and Kate. He’s an omega and her father is an alpha wolf. It’s Romeo & Juliet as these young lovers from different classes struggle against a world that doesn’t think they belong together. Our film focuses on their pups who wonder out in the world where one of them, Runt (West) is taken hostage by a rough group of rogue wolves. Their plan is to bait the good guys into mounting an all-out rescue that leaves the pups and females unprotected and ripe to be taken over. Of course the remaining siblings decide to try to help with the rescue with the help of a friendly bear cub. Cuteness ensues, and the good guys win the day.

The voice cast actually does fine. The movie falls short because the story doesn’t really have a lot of heft to it. We’ve seen it all before, and these characters just aren’t as cuddly and lovable as so many others have been. The animation doesn’t hold up very well. The filmmakers brag about the work on the wolf fur, but it looks like feathers and not fur. That particular point seemed to really annoy my wife.

The best thing this release has going for it is that it’s harmless fun at a pretty good price.

Alpha & Omega 2 is presented in its original aspect ratio of 1.78:1. The 1080p image is arrived at with an AVC MPEG-4 codec at an impressive average of nearly 40 mbps. Even if the animation is rather weak, you can’t fault the high-definition image presentation. With a sweet bit-rate, this one looks pretty crisp and clean. If only the source material could take advantage. Colors are bright and clean. But the film lacks any kind of texture. You never really feel any of these surfaces.

The DTS-HD Master Audio 5.1 is engaging enough. Dialog is crisp and clear. There aren’t a ton of surround moments here, and the sub sleeps the entire way through the film. Hey, the kids won’t notice, so it’s probably all good.

A Wolf’s Tale: (8:14) This is a typical making-of feature. Director Richard Rich wants to tell you how good this stuff is; he just doesn’t have the ammo. It’s aimed strictly for the little ones. He speaks as though he’s telling a bedtime story.

Personality Test: Check to see what kind of wolf you are. There was one of these on the first film’s release.

We usually get our chow/shepherd Baby to review this kind of film. It was tough on her the first film, and we literally had to chain her to the computer to get her to finish. When I brought up doing the sequel she just sort of snarled and looked at me with those “make my day” eyes. She’ll get her chance, I fear. The sneak peaks hint at more adventures in this franchise. The studio has so many better things going on; here’s to seeing more of that instead. You want to be the one to tell Baby she’s got to watch more of this? You’re braver than I, and I’m “an alpha to be sure”.

Gino Sassani is a member of the Southeastern Film Critic's Association (SEFCA). He is a film and television critic based in Tampa, Florida. He's also the Senior Editor here at Upcomingdiscs. Gino started reviewing films in the early 1990's as a segment of his local television show Focus. He's an award-winning recording artist for Omega Records. Gino is currently working on his 8th album Merchants & Mercenaries. Gino took over Upcomingdiscs Dec 1, 2008. He works out of a home theater he calls The Reel World. Favorite films: The Godfather, The Godfather Part II, The Body Snatcher (Val Lewton film with Karloff and Lugosi, not the pod people film), Unforgiven, Gladiator, The Lion King, Jaws, Son Of Frankenstein, The Good, The Bad And The Ugly, and Monsters, Inc.
12 Years a Slave “31 Nights Of Terror” Pacific Rim (Blu-ray)