Posted in: No Huddle by Brent Lorentson on October 17th, 2013 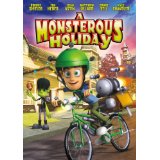 The Halloween holiday season is upon us, and as kids count down till the day they can trick or treat dressed as their favorite ghoul or goblin, leading to candy binges that would put me in a diabetic coma. It’s also appropriate that the kids get to watch some films to have some thrills and chills that are age-appropriate (don’t make the mistake of showing a six-year-old Friday the 13th 2).  With the release of A Monsterous Holiday, we get a short film that clocks in at 48 minutes; the cover art may appeal to some, but looks are deceiving.

Andy (Drake Bell) is one of those boy geniuses that would rather tinker on science projects in the garage than worry about sports. Finally it seems like it just may be his year to beat out a pair of twins who always seem to come out ahead.  Unfortunately after one explosion too many, Andy’s dad decides to find a place for him on the football team.   To make matters worse, the night of the big science fair happens to be the same night of the team’s big Halloween game.

Frustrated and unable to decide on an experiment that will get him first place at the fair, Andy decides to go and try to get help from the greatest scientist of all time, Doctor Frankenstein.  Instead of finding the good doctor, Andy runs into Frankenstein’s monster who prefers to just be called Frank (voiced by Jon Heder).  In a scheme that could only work in a cartoon, the two decide to help each other out, since Frank has always liked football and Andy wants to experiment in the lab.  But things quickly get out of hand when Andy’s experiment with a mold transforms into a giant monster that wants to destroy the town.

While watching this I couldn’t help but wonder how many times we’ve seen this story before, and what’s worse is the execution of this production just feels lazy from a story standpoint and offers nothing new.  Last year Frankenweenie did this same story but executed it so beautifully that I don’t believe a children’s film will match it any time soon.  The animation also fails to impress, as it resembles something one would expect from recent college grads putting this together on a shoestring budget rather than something actually aired on television.

It’s the voice talent that manages to inject some life into this.  With Kyle Chandler, Brooke Shields, Sean Astin and Matthew Lillard filling out the voice cast,the talent is there; it’s just everything else with the production that seems to fall short.

What I believe is the most telling and honest assessment of the film is, my little girl was excited to get to review a film with me.  She loves every chance she has to review something with me, especially when it’s a kids’ film.  And when she heard Drake Bell was one of the voices, well, there was no way I’d be reviewing this with her.  At about the thirty minute point of the film she was passed out asleep.  I know there are some parents who would look at this as a plus, using the movie as a lullaby to get their feisty ones settled down and asleep.  But I don’t believe it’s what the filmmakers had intended.

Brent Lorentson is a horror writer and film critic based out of Tampa, Florida. With a BA in Digital Film, he co-wrote and co-directed Scavenger Hunt. His short stories have appeared in various horror anthologies. In 2019 his short script Fertile Blood will be a part of the anthology horror film Slumber Party. He is currently working on his first novel A Dark and Secret Place set to be released in late 2019. Favorite Films: Taxi Driver, Fight Club, I Saw the Devil, The Wild Bunch, Dawn of the Dead, A Clockwork Orange, Pulp Fiction, Heathers, The Monster Squad, and High Fidelity.
Black Label Society: Unblackened (Blu-ray) Hart of Dixie: The Complete Second Season