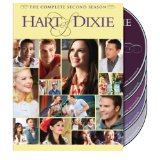 “Zoe Hart, you went from no boyfriends to two in one night… which one you gonna keep?”

That’s the burning question at the heart of this charming dramedy’s second season. Most of the fish-out-of-water shenanigans from the previous year are done now that city girl Zoe Hart has settled into her medical practice in fictional BlueBell, Alabama. As a result, season 2 of Hart of Dixie focuses heavily on the many romantic entanglements of BlueBell’s citizens, led by the least convincing doctor since Dr. Pepper.

Zoe (Rachel Bilson), the aspiring surgeon who inherited half of an Alabama medical practice from the biological dad she never met, ended season 1 caught between two wildly different guys. George Tucker (Scott Porter) is the respectable lawyer who left his fiancée, Lemon Breeland (Jaime King), at altar because of his feelings for Zoe. Unfortunately, Zoe didn’t know about George’s grand gesture, so she hopped into bed with the frequently shirtless Wade Kinsella (Wilson Bethel). Wade was still in Zoe’s bed when George showed up to proclaim his love for Zoe. By the end of the season 2 premiere/“I Fall to Pieces,” it seemed like the show was going to frustrate its fans by having Zoe “choose herself” and reject both George and Wade.

Thankfully, creator Leila Gerstein and her team had the guts to actually pick one. There’s nothing wrong with a character like Zoe asserting her independence, but I found it refreshing that the show didn’t wait until a theoretical fourth of fifth season to explore Zoe’s relationship with one of these guys. And Zoe’s not the only one. Popular incumbent mayor Lavon Hayes (Cress Williams) runs for re-election and wrestles with his feelings for high school flame Ruby Jeffries (guest star Golden Brooks), former secret lover Lemon, and a new love interest in the form AnnaBeth Nass (Kaitlyn Black), Lemon’s best friend. Heck, even Brick Breeland (Tim Matheson), Lemon’s dad and Zoe’s partner/rival at the medical practice, hooks up with multiple women this year.

Despite having a doctor as its main character, Hart of Dixie is a country mile from being any sort of serious medical drama. (The closest season 2 comes is a leprosy scare in Ep. 3/“If It Makes You Happy,” and an airplane emergency in the season finale/“On the Road Again”) Of course, it doesn’t help that Bilson is wildly miscast as someone who is supposed to be a competent doctor. Now that Zoe is no longer an outsider in BlueBell, the former O.C. actress can’t lean on her prissy tics quite as much. What’s left is a ton of whiny insecurity, which often makes Zoe seem like a bad doctor and an even worse (girl)friend. Bilson — always attracting attention with Zoe’s “shorty shorts” — continues to be someone you’d want to play doctor with, rather than someone you’d want to play a doctor. I admire the actress’s willingness to look goofy, but she’s simply not good enough to carry her own show.

Then again, Hart of Dixie is at its best when it’s focusing on small town life and the colorful characters who populate BlueBell. (After all, this is a place with a pet alligator named Burt Reynolds, and a dog named Dolly Parton.) Porter’s dorky straight man George gets to tap into his rock star side a few times in season 2. Bethel’s rascally charm as Wade is always welcome, while King continues to make Lemon such a three-dimensional character that she can hardly be considered the show’s “villain” anymore. (Newly-single Lemon is woefully ill-equipped to stand on her own two feet; a part of her wishes she were more like career-minded Zoe.) Those characters each grow throughout season 2 —Wade and Lemon even start working together to consistently amusing results — and the actors handle the changes nicely. Meanwhile, Williams, who is equally good with the show’s comedic and dramatic material, continues to be a gregarious, soulful presence as Lavon.

Season 2 also gave the show an opportunity to expand on the lively background players of BlueBell. My favorite is Black’s kind, loyal AnnaBeth, who has quietly achieved everything Lemon is trying to accomplish as a smart, independent woman. I also enjoy sweet, dim lovebirds Tom (Ross Phillips) and Wanda (Mallory Moye), as well as Reginald VelJohnson’s dandy, dapper blogger Dash DeWitt and Lemon’s bratty sister Magnolia (Claudia Lee). Lavon recruits a rag-tag group of these locals to rescue his pet gator in the finale, which also featured a surprising declaration of love and Zoe returning to New York for a visit (and possibly more). Guests this year also included actress/singer Laura Bell Bundy (who recurred as peppy shopping enthusiast Shelby) and country trio Gloriana in the season finale. (Every Season 2 episode is named after a country song.)

This DVD set doesn’t have any special features, but it includes every season 2 episode on five discs. Season 3 is already underway on the CW, so if you were relying on these discs to catch up, you’d better burn through them right away. The good news is this dixie gloss on Northern Exposure continues to be the equivalent of your favorite southern meal: you know it’s not the best thing for you, yet you find it oddly comforting and you wind up consuming more than you expected.