Posted in: Disc Reviews by Jeremy Butler on October 17th, 2013 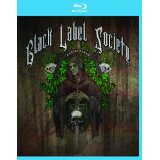 My knowledge of Heavy Metal and Heavy Metal bands can be counted on one hand with a couple fingers to spare. So as you can probably imagine, when this discs found its way to me, my enthusiasm or my confidence in it was not high. So when I say that Black Label Society: Unblackened was not what I expected, it is not an indictment; quite the opposite, in fact. The concert started right as I hit play, I expected to see the band come out, pick up their instruments, and possibly do a little introduction (that came towards the end of the concert) but that was not the case. As soon the banner drops, the group launched into the first song of their set, Losing Your Mind; no muss, no fuss. The song had a catchy and enticing chorus, but other than that, it did not resonate with me, possibly due to the fact that I had trouble understanding what vocalist Zakk Wylde was saying. I don’t attribute this inability to him but rather my ears adjusting to this new experience.

Needless to say, I did not take an immediate liking to the group and their brand of music, but by the third song of the set, Sold My Soul, I had been brought into the fold. There was palpable passion behind the vocals of that song, making it one of the most relatable songs of the set in my opinion.  From then on, I was a member of the crowd; if I knew the words I would have been singing along.

The band played through their entire set with minimal interruption, only pausing briefly for introductions towards the end of concert and a brief homemade video featuring what I believe to have been Wylde and his young daughter. I would have like to have seen more up-close-and-personal crowd responses as the band played; there were a few, but for the most part, you only saw the crowd from behind during wide-screen shots of the band. Despite minimal crowd interaction, the show maintained good energy thanks to excellent guitar solos, Wylde displaying his mastery of the guitar as well as the piano, and great editing; the screen was never stagnant remaining on the same thing too long; every member of the band got adequate screen time, and I especially thought focusing on the musicians’ hands during their solos to show the complexity of what they were doing was a nice touch.

Spoke in the Wheel

Throwin’ It All Away

I Thank You Child

Stillborn (The best note to end the concert on)

This concert is presented in an aspect ratio of 1.78:1. The 1080p image arrived at with an AVC MPEG-4 codec at an average of 30 mbps. The concert is pretty straightforward, not loaded down with pyrotechnics or anything outlandish or extraordinary; however, from the Black Label Society backdrop, to the sheens of sweat seen on Zakk Wylde’s forehead to the visible individual strings of his long hair, the video is visually pleasing. Throughout its entirety, it maintains that same excellent visual clarity and displays great lightning.

The DTS-HD Master Audio 5.1 does the job and does it well, offering great separation between instruments and showcasing the guitars during the solos; the guitar solos provide the most immersive feel of the concert, but the drums, bass, and piano are not to be ignored. There is also the choice of the LPCM Stereo track, but for my money your time is better spent on the DTS-HD track.

Zakk Visits HM Prison Stocken (U.K.): (55:37) an almost hour-long feature; Zakk starts off with a display of his talents on the guitar. Afterwards, he opens up the floor for question from the crowd who I assume are the prisoners given that they are never displayed on screen. The footage is a bit rough, but it’s not bad.

Interview: (6:17) A brief interview with vocalist Zakk Wylde backstage before the concert (I assume) and intercut with concert footage. Zakk Wylde talks about how it all came together and explains the delay of the concert from its original date.

A new experience indeed, an unwelcome one at the time, but not anymore; as I said, before I had never heard of Black Label Society and never listened to any of their music, but now they are a band that I will be on the lookout for going forward, and I wouldn’t be surprised if a few of their songs found their way onto my IPOD.

16.I Thank You Child

17.Stillborn (The best note to end the concert on)

Jeremy Butler is a film school graduate of the International Academy of Design and Technology. He is been writing for Upcomingdiscs since 2012; however, movies have played a big part of his life for much longer. Favorite genres include horror, science fiction/fantasy, and comedy. Favorite movies are V for Vendetta, Boondocks Saints, Kiss Kiss Bang Bang, and The Godfather.
“31 Nights Of Terror” Pacific Rim (Blu-ray) “31 Nights Of Terror” Monsterous Holiday