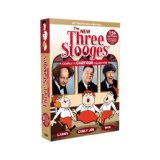 The Three Stooges might well be one of the most famous comedy teams in American entertainment history. What started as a Vaudeville act in the early 1920’s would take theater audiences by surprise in the Depression years of the early 1930’s in the famous shorts for Columbia Pictures. The shorts featured brothers Moe and Curly Howard with Moe’s vaudeville partner Larry Fine. The shorts found them in all manner of situations from plumbers to Civil War soldiers. Moe was the domineering leader of the trio who ruled with an iron fist, usually slammed against Curly’s head or Larry’s jaw. The boys took slapstick rather literally, and before long their routines became part of the pop culture. The shorts appear violent even today. Moe wouldn’t think twice about slamming a sledgehammer into Curly’s head. The show’s sound effects would become iconic as well.

In the 1960’s and 1970’s the Stooges found new fame when their shorts showed up on television. A brand new generation was introduced to the Stooges, who had gone through a few line-up changes over the years. When Curly became too ill to go on, brother Shemp joined the gang. Other incarnations included Joe Besser and finally Joe DeRita as Curly Joe. Moe and Larry remained for the entire run. It’s these television airings that first introduced me to the boys.

The popularity of the television run didn’t go unnoticed, and Cambria Studios went to work on a revival. The boys were pretty much past their prime and weren’t able to carry the kind of workload, not to mention the pratfalls, of the original shorts. The answer was to produce 40 very short segments that were true to the spirit, if not the energy of the original films. They would act as bookend pieces for 156 cartoons that would feature the voices of the boys. The original reaction was quite good. Fans who had grown up with the Stooges loved the idea of seeing them in color. It was easy to forgive the frail condition and tame antics just to have the boys back. The cartoons were another matter completely.

Sadly, the cartoons never lived up to the expectations. Gone was the familiar Three Blind Mice theme music. In its place was a rather annoying march theme that is thankfully easily bypassed here. The segments were usually under 3-4 minutes. You got a total of about 7 minutes when you added the live-action material. That stuff had to be repeated. 156 cartoons/40 live segments. Do the math. The cartoons were often silly rather than slapstick. Many of the first on this set have the boys as rangers dealing with a talking bear. It might have worked for Yogi, but situations like that just didn’t recreate the same world in which The Three Stooges once resided. Insects and animals talked. The boys would fly around in planes and other vehicles. Likely, television code had something to do with it, but there is almost none of the slapstick violence. Gone also were the trademark sound effects and many of the popular one-liners. There are a few bright moments, but they are too quickly lost in the bunch.

It didn’t help that Curly Joe was likely most people’s least favorite stooge. I don’t know anyone who thinks this trio was the best of the bunch. Of course, Shemp and Curly were gone, and there was really no other choice at the time. Still, the result is something less than stellar. The shorts do feature frequent classic Stooges nemesis Emil Sitka.

It also doesn’t help that the video quality of this stuff remains poor. I certainly understand that there are likely no better elements out there, and the cartoons aren’t going to generate the kind of revenue any serious restoration would require. The result is a collection that can only appeal to Three Stooges completists. The cartoons are also not shown in any logical order. The title card indicates the episode number, and they’re all over the place. The packaging is even inaccurate as it credits the cartoons to 1969. It was actually 1965-1966.

Finally, I have to admit I found the live action segments to be bittersweet. Certainly more Stooges is better, but I was saddened at the condition the fellas were in by this time. They were obviously making a great effort, but you could tell they just didn’t have the energy that made them what they once were. Both Larry and Moe would pass away ten years later in 1975. Unfortunately, this set isn’t going to bring back any of those great memories.

The set includes all of the cartoons and the live material. You also have the option to just watch the cartoons. There’s a bonus CD that reproduces two of the Stooges albums. You get the 12-track Sing-Along With The Stooges and the 11-track holiday album, Christmas Time With The Stooges. There are some golden memories to be found here and might just be the best reason to buy the set.

The original Three Stooges live on through the nearly 200 Three Stooges shorts and a recent film. The cartoons provide merely a window into what once was. If you’re old enough to have seen the boys on the big screen, “You’re doing good if you can remember your own name, you knucklehead.”

Gino Sassani is a member of the Southeastern Film Critic's Association (SEFCA). He is a film and television critic based in Tampa, Florida. He's also the Senior Editor here at Upcomingdiscs. Gino started reviewing films in the early 1990's as a segment of his local television show Focus. He's an award-winning recording artist for Omega Records. Gino is currently working on his 8th album Merchants & Mercenaries. Gino took over Upcomingdiscs Dec 1, 2008. He works out of a home theater he calls The Reel World. Favorite films: The Godfather, The Godfather Part II, The Body Snatcher (Val Lewton film with Karloff and Lugosi, not the pod people film), Unforgiven, Gladiator, The Lion King, Jaws, Son Of Frankenstein, The Good, The Bad And The Ugly, and Monsters, Inc.
“31 Nights Of Terror” The Conjuring (Blu-Ray) A Hijacking (Blu-ray)