Posted in: Disc Reviews by Brent Lorentson on October 23rd, 2013 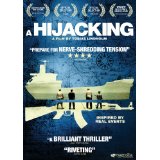 In the wake of Captain Phillips being released in theaters, another tale of a ship being held hostage by Somali pirates is released on Blu-Ray and DVD.  This true story comes out of Denmark and has made a successful run through the festival circuit, but how does it fare up against the mighty Tom Hanks and his tense, nail-biting thriller?  Well, to be fair, though the two films deal with the same subject matter, the execution is vastly different, but A Hijacking manages to deliver an equally stunning film filled with great performances and filmed in such a way we feel as though we are one of the hostages on the ship, or in the negotiation room where numbers are crunched to ensure survival of the crew but also preserve the company’s bottom line.

On board cargo ship,The Rozen, the ship and its crew is getting ready to head into Mumbai where the ship’s cook Mikkel (Pilou Asbaek) is excited about returning home to his wife and daughter.  Unfortunately those plans are indefinitely delayed once the ship is taken over by a group of pirates.  In Denmark, the CEO of the shipping company, Peter (Soren Malling) is notified about the ship’s capture, and the motions quickly roll into place to return the ship and the crew safely.

As the negotiations take place, Mikkel is locked in a room with the captain of the ship as well as the chief engineer.  With limited supplies and no toilet, the men are forced to use a corner of the room as their own toilet, and as time progresses their surroundings grow more and more foul.  Realism is the key to what makes these hostage sequences work as their clothes grow dingier with every passing day and the flies continue to multiply in the room.  While back home, Peter handles the negotiations from an air-conditioned room dressed in sharp expensive suits.

Working as the negotiator between the pirates and the businessmen back home is Omar (Abdihakin Asgar).  Omar wants to make it clear he is not one of the pirates but is simply there to make the process move along more smoothly.  The methods employed by Omar range from friendly to borderline psychological rape as he pushes Mikkel and Peter to their emotional breaking points all in hopes to receive the most money he can.  In a gut-wrenching scene where Mikkel is finally awarded the chance to speak to his wife, seeing how this was nothing more than a ploy to manipulate the families is intense.  As we see the joy fade to despair to an explosion of rage on the part of Mikkel, this scene hits with the same impact as the emotional scene in Captain Phillips when he is finally allowed to break down.

As for Malling’s performance, it’s so subtle but engaging.  In his solitary moments where he is staring off, we can see his mind working and orchestrating his next move in this financial game of chess where with every figure sent to the pirates could be an amount that can secure life or result in the death of the entire crew.  His stoic confidence shows in every scene up until there is a moment where he realizes his actions could have endangered the life of one of his men.  This explosion of emotion hit me.  Seeing this crack in his emotional armor finally lets us in to appreciate that this isn’t just about saving money but ensuring the life of all those on board.

While this may not be the thrill-a-minute film that Captain Phillips delivered, A Hijacking delivers a nail-biting tactical film about the business end of hostage negotiation off the coast of Africa. This gem out of Denmark deserves to be seen by a wider audience, and embraced for its moments of greatness.

A Hijacking is presented in a 1.78:1 ratio from its original 1.85:1 release.  The 1080p image is arrived at with an AVC MPEG -4 codec with an average of 37 mbps.  Considering this is a film going for a more documentary look, there are scenes throughout that may feel under-lit or even overexposed, but I’m thinking this is a creative choice on the part of the director and cinematographer.  In contrast, when the story is back in the offices we get plenty of detail and the image is especially sharp.  This again I believe was a choice on the part of the filmmaker choosing to give the separate locations different looks and color palettes.  On the ocean we are given warm colors and over-exposure to help immerse us into the heat and vastness of the Indian Ocean, whereas in the office everything is much more muted and there is a lack of bright colors.  Along with some beautiful handheld cinematography, this is a good looking disc.

The Danish DTS-HD Master Audio 5.1 track is not as robust as one might expect when watching a pirate/hostage film.  The film is more character-driven and not filled with a booming score.  The dialog is mixed between Danish and English with subtitles added in the appropriate spots.  When action does occur, as with the sporadic burst of gunfire, it pops well and delivers the desired effect. The ever-present sound of the ocean as well as the murmurings of the surrounding pirates add a nice touch to the scenes on the ship with Mikkel, adding a bit of the ironic claustrophobia in the middle of the ocean.

Behind The Scenes: (14:20) Here we are given a brief 14-minute look, broken up into five chapters about the making of the film and those that were involved.  Though it’s a short and tight feature, it is filled with plenty of information about the true events that inspired the film as well as extra tidbits like the fact they really filmed the movie in pirate-infested waters.  Seeing these actors at work in some of my favorite scenes was also a nice little bonus as well.  This is a feature I wish was stretched out and filled with hours of information, but this was enough to satisfy me for the time being.

Every year there is a foreign film that emerges from the pack and stands out as that one must-see film.  A Hijacking is that film.  This and Captain Phillips are meant to be played together as a double feature; normally when two films come along either both are terrible or only one manages to be OK.  A Hijacking is a film that delivers a punch and just takes you back when you realize this is what is really going on in that part of the world.  For those who don’t mind a few subtitles, this is a must-watch film.

Brent Lorentson is a horror writer and film critic based out of Tampa, Florida. With a BA in Digital Film, he co-wrote and co-directed Scavenger Hunt. His short stories have appeared in various horror anthologies. In 2019 his short script Fertile Blood will be a part of the anthology horror film Slumber Party. He is currently working on his first novel A Dark and Secret Place set to be released in late 2019. Favorite Films: Taxi Driver, Fight Club, I Saw the Devil, The Wild Bunch, Dawn of the Dead, A Clockwork Orange, Pulp Fiction, Heathers, The Monster Squad, and High Fidelity.
The New Three Stooges: Complete Cartoon Collection “31 Nights Of Terror” Plush