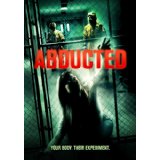 Well, this is a new one for me; usually when I see a movie about a couple being abducted it generally involves a couple backpacking their way through Europe, but in this case, a good old-fashioned trip to Hollywood has become hazardous. No complaints about the change of locale, however, because it actually makes for great contrast from films with similar premises. Abducted does a good job building suspense towards a conclusion that I would have never guessed.

On what is supposed to be a romantic trip to Los Angeles, couple Dave (Trevor Morgan, The Sixth Sense) and Jessica (Tessa Ferrer, Grey’s Anatomy) find themselves taken by masked abductors from their romantic perch on Mount Hollywood. Sedated, the two wake up in a mysterious room that they have no hope of escaping from. Continuously drugged and constantly watched, the two try to put the pieces together behind who has taken them and for what purpose, all the while receiving cryptic orders from their kidnappers via their cellphones.

Periodically, the two are separated and subjected to various medical experiments. First believing that their circumstance is the result of Jessica’s father’s position within the government, the two document every interaction with their captors. Days go by and turn into weeks; at different intervals, Dave and Jessica find themselves in the company of several different couples, and with every new addition comes the change of their theory about their captors; from the Taliban, to organ harvesters, to aliens, the isolation begins to break down the couple’s psyche, and they make their plan to escape.  What they find may be more than they can bear.

Starting out, I would have expected a little more panic from two people that have just awoken in a strange place with no clue of how they got there or why they are there. This is not to say that there was anything particularly wrong with how the two actors played it; Trevor Morgan does a good job of keeping it together in the beginning and protecting his love, the way you would expect a caring boyfriend to, and Ferrer plays up her fear adequately. As the story progresses, the performances get a lot better as the continued isolation displays the characters’ slow descent down the rabbit hole. This is especially true in the case of Ferrer, who put some real emotion behind her portrayal.

The film also has an interesting look to it. It keeps the dark element going and the inclusion of the blinking red light; it’s enough to make me lose my mind, so it’s no wonder that the characters are. Kudos to the production team for the subtle way they made the abductors’ presence known; I don’t want to give away a lot of details, but let’s just say that it was very effective.

The element of the ever-changing theory as to who the group’s abductors are makes for an excellent component to the story. A majority of the theories make sense, allowing the audience to easily relate to the possibility that they could be true, with the exception of the alien abductors theory of course. It lends an air of unpredictability, making the true outcome to the story impossible to predict.

Jeremy Butler is a film school graduate of the International Academy of Design and Technology. He is been writing for Upcomingdiscs since 2012; however, movies have played a big part of his life for much longer. Favorite genres include horror, science fiction/fantasy, and comedy. Favorite movies are V for Vendetta, Boondocks Saints, Kiss Kiss Bang Bang, and The Godfather.
Storm Rider Hugh Laurie: Live on the Queen Mary (Blu-ray)