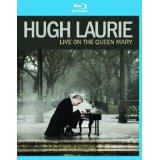 Hugh Laurie is not the first — and he certainly won’t be the last — actor who decided he wanted a career in music too. The move might come as a surprise to people who primarily know Laurie from his sterling eight-year run as the misanthropic title character on House M.D. (Though not if you watched the show carefully.) In the past, Laurie has rocked out with some of his small-screen comrades for charity. But it turns out that after eight years of playing one of the crankiest characters in television history, Laurie was ready to sing the blues.

Hugh Laurie: Live on the Queen Mary aired on PBS in August. The concert finds the actor and the first-rate Copper Bottom Band performing aboard the legendary luxury liner, which is permanently moored in California. For Laurie, dressed for the occasion with a captain’s hat as he took the stage, the show was the realization of a lifelong dream. You wouldn’t necessarily expect an Oxford-born Englishman to be obsessed with New Orleans jazz/blues, but Laurie acquired a passion for that music as a teenager. Laurie was especially dazzled by blues legend Professor Longhair, who had recorded his own “Live on the Queen Mary” album in 1975.

That genuine passion — Laurie is often visibly giddy on stage — carries the day during this live performance. Though Laurie now has two albums under his belt — 2011’s “Let Them Talk”, and this year’s “Didn’t It Rain” — I’m not entirely convinced he’d make it as a bona fide musician if he weren’t also a famous TV actor.

Laurie certainly has musical talent, but it’s his wit and personality that shine on stage. Live on the Queen Mary shows him playing the piano, the guitar and even the gavel. (That last “instrument” makes an appearance in the first portion of “Send Me to the ‘Lectric Chair.”) I enjoyed his swaggering, raspy singing voice in mournful tunes like “Evenin’” and “Careless Love.” The good news is Laurie seems to be perfectly aware of his limitations. So he’s not afraid to regularly cede the spotlight to scorching backup vocalists Jean McClain (“Send Me to the ‘Lectric Chair”) and Gaby Moreno (“The Weed Smoker’s Dream”). Laurie also isn’t shy about hamming it up on stage, whether he’s doing a bit of tango with Moreno on “Kiss of Fire” or barely able to sit still at his piano during “Junco Partner.”

Not surprisingly, the show features more between-song banter than usual from Laurie, who at one point jokes about killing his humorless piano teacher. The last two songs in the set — “Tipitina” and “Go to the Mardi Gras” — are Professor Longhair covers. They, along with the rest of this concert, serve as a joyful tribute to Laurie’s musical idol.

Hugh Laurie: Live on the Queen Mary is presented in an aspect ratio of 1.78:1. The 1080i image is arrived at with an AVC MPEG-4 codec at an average of 30 mbps. As the title suggests, this show was filmed aboard a historic ship, but you’d never know it from the visual presentation. This could be any darkened concert space anywhere in the world. As a result, the image (when it comes to color and contrast) is somewhat muted overall and a bit softer in medium shots. Close-ups display a pleasing amount of sharpness and detail, but some of the darker shots reveal a relatively heavy dose of digital noise. The most important thing here is obviously the music, but Eagle Rock has previously released concert Blu-rays that were also visually striking. This isn’t one of them.

The DTS-HD Master Audio 5.1 track shines because it is extremely well-balanced. The excellent horn section dominates the front speakers, while the funky, substantial bottom end is right on-point. That means there is remarkable clarity in the vocals, and they never get lost in the formidable sound field. This is a dynamic and detailed track; you can even hear the sound of Laurie blowing into his mic as he whistles during “Go to the Mardi Gras.” Not the most overpowering aural presentation, nor is it meant to be. You also have the option of listening to the show in LPCM Stereo.

Interview with Hugh Laurie: (20:28) In this charming chat, Laurie admits to being incredibly surprised to be on stage and surrounded by world-class musicians. (The actor compares himself to a Saudi playboy who’s been given a Ferrari he doesn’t quite know how to drive.) This interview reinforces the idea that Laurie possesses a healthy self-awareness about his good musical fortune. You also get to hear him expand on his love for Professor Longhair (not to mention blues music in general) and his disdain for those painful piano lessons. Presented in HD.

It’s hard to tell Hugh Laurie that he shouldn’t quit his day job when he’s clearly having so much fun playing music. Laurie may be somewhat limited as a musician, but this is no vanity project. This concert was clearly a labor of love for the actor, and this Blu-ray lets you see and hear his joy.

“31 Nights Of Terror” Abducted The Counsellor