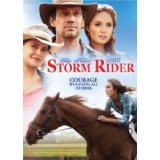 It appears that Kevin Sorbo has shed his heroic image for that of the direct-to-video family film. Back in 2009 we interviewed the actor for another horse film called Tommy And The Cool Mule. Interestingly enough, Storm Rider also involves a mule. He appears quite comfortable with the change. And while he’s not playing the kind of heroes he did in Hercules or Andromeda, he has been working quite a bit in these smaller productions. I’m sure that the fans would love to see him once again in the larger-than-life roles that made him famous. For now you’ll have to settle for heartwarming and small-budget. For now, you’ll need to settle for Storm Rider.

Dani (Churchran) is used to getting what she wants. Her family is filthy rich, and she gets to ride thoroughbred horses in competitions. As the movie begins, we see she has a rather huge collection of blue ribbons for such a young teenage girl. It all comes tumbling down when her father (Howell) is busted by the Feds for security fraud. Now we know how they got so rich. Her stepmother (Sorbo) jumps ship as soon as things go bad. That’s no big loss, but she takes Dani’s younger half-brother with her. She’s forced to sell her favorite horse Admiral to her rival. Since Dad’s on his way up the river, she has to move in with her Uncle Sam (Sorbo).

Sam is a small-town vet who looks after horses, for the most part. He’s a genuine Oscar Madison slob and lives in a remote area without cell service. He’ doesn’t even have a cordless phone in the house. He’s got one of those hang-on-the-wall phones with a cord. You gotta love it. He’s also a bit gruff. He hasn’t gotten along with his brother (Dani’s dad) and is too used to living alone. Dani arrives with a huge chip on her shoulder and isn’t very nice to the folks she meets along the way. She looks down on Sam and his lifestyle, never really appreciating what he’s doing for her.

All of that begins to turn around when Jody (Swanson), who is trying to court an oblivious Sam, gifts her with a mule she names Stormy. For six months she cares for and bonds with the animal. It appears she’s making progress until the opportunity comes along to train someone else’s thoroughbred for competition. Suddenly Stormy is “just” a mule, and she neglects him to train the horse. But when a small plane crashes in the mountains with her brother and Uncle Sam, she finds that Stormy is the only way she’s going to be able to ride to the rescue. Everything works out for everybody, except inmate pop, and the film ends. Lessons learned all the way around.

If you think this sounds exactly like so many girl-and-her-horse movies you’ve seen before, you’re right. Then again, maybe not exactly. I give tremendous credit for not going in the direction I expected at first. The film resists the temptation of having Dani ride the mule in a horse competition, coming out victorious against all odds. In fact, while there’s a lot of talk of these events, we’re not subjected to even one minute of a horse show or contest.

We also feel like we’re only getting a Reader’s Digest version of the story. There are a lot of characters and elements, and none of them are well-serviced by the story. Dani is the only character we really get to know. The relationships are never fleshed out. We never really understand much about her rivalry with the other girl. Sam’s relationship with Jody relies too heavily on an offhand remark by Dani. Sam may have been clueless to her intentions, but honestly so was I until Dani makes her remark. Too much of the story depends on us being told things. I still don’t know exactly what her father did to get them in so much trouble. There’s no way I buy that he married Vanessa and that they were together long enough to have a ten-year old son. People and events come and go too quickly, often without proper setup for us to get into the heart of the story. That might be okay for an action or adventure film, but not so much in the heartwarming tale.

Of course, I’m not the target audience. This one is aimed at those horse-loving young girls. I know. I’m married to one. She has 243,956 model horses, and that probably doesn’t include the ones in boxes. That’s who the film is aimed at, but it never appeared to captivate her either. Perhaps it was all “a misunderstanding”.

Gino Sassani is a member of the Southeastern Film Critic's Association (SEFCA). He is a film and television critic based in Tampa, Florida. He's also the Senior Editor here at Upcomingdiscs. Gino started reviewing films in the early 1990's as a segment of his local television show Focus. He's an award-winning recording artist for Omega Records. Gino is currently working on his 8th album Merchants & Mercenaries. Gino took over Upcomingdiscs Dec 1, 2008. He works out of a home theater he calls The Reel World. Favorite films: The Godfather, The Godfather Part II, The Body Snatcher (Val Lewton film with Karloff and Lugosi, not the pod people film), Unforgiven, Gladiator, The Lion King, Jaws, Son Of Frankenstein, The Good, The Bad And The Ugly, and Monsters, Inc.
Family Tree: The Complete First Season “31 Nights Of Terror” Abducted