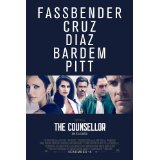 Ridley Scott has undergone a bit of a change in his last couple of films. He has become more contemplative and philosophical. It’s certainly understandable. In the middle of filming The Counsellor, his brother and producing partner Tony Scott took his own life by jumping from a bridge. Obviously production on this film was halted for a time. Credit the director for pulling it together and getting the film back on track and finally released. Still, as you watch the film, you can’t help but wonder if it wasn’t heavily influenced by his own personal tragedy. It’s not an uplifting film at all; in fact, it’s quite depressing. If Prometheus was about the meaning of life. I’d have to say that The Counsellor is about the meaning of death.

It will likely take additional screenings for me to feel confident enough to say I know what’s going on here. But, the premise itself isn’t really all that complicated. It’s the telling where things are very complicated. In a nutshell, we have a lawyer, The Counsellor, who for reasons we never really know decides to get involved in a drug smuggling deal. Obviously, he’s in it for the cash, but the story dances around why he’s so desperate to make the money. His life appears pretty good. He’s engaged to Laura (Cruz) who appears to adore him. His practice appears to be thriving, and he lives quite well. Whatever the reasons, he’s now involved. Of course, things don’t go the way they were planned, and he finds himself, along with his partners, in trouble with the cartel that was calling the shots on the deal. Now people are going to get killed, and they never really understand why. What’s worse, neither do we. When things do finally go horribly wrong, they do so with a whimper and not a bang.

The Counsellor is not an action film. That isn’t to say there aren’t a few limited action sequences. Instead the story focuses on the characters and many conversations between them. What few details we do manage to piece together come from these conversations. They aren’t your typical conversations, however. Writer Cormac McCarthy stages these talks with overly stylish dialog and a lot of philosophizing over motives and death. These talks are like a verbal dance where the precise choreography is far more important than what’s actually being communicated. At times it gives you an almost film noir feel, but there are many other moments where I found myself turning my head the way my dog does when she’s trying to figure out what the heck I’m talking about. The result is often disturbing. Needless to say that you will never look at your aquarium the same way after hearing Javier Bardem describe Cameron Diaz’s interaction with the windshield of his Ferrari.

If you’re looking for likable characters, there are none to be found here with the exception of Laura, played by Penelope Cruz. Unfortunately she’s a throwaway character, literally. Michael Fassbender plays the title role as a complete contradiction. He’s allegedly intelligent enough to be a successful lawyer, but he’s played as a man in way over his head and without the common sense to figure it out. A third of the film finds him asking each of the other characters basically, “Why me?” Each in turn has a lot to say without ever really addressing the film’s events. When his wife is captured for his sins, he spends 15 minutes talking to a man, who I guess has influence in the cartels, who spends the time asking if he’d trade places with her. When he gets the hopeful affirmative, he acknowledges how good that is only to remark that it doesn’t matter. There’s so much talk about paths already taken that the film ends up being an abject lesson in hopelessness.

The characters aren’t really people, it appears. They are mostly archetypes that represent concepts more than personalities. Cameron Diaz is a woman in love with her two pet cheetahs. She gives us an eerie soliloquy about how much she loves to watch them chase down and kill rabbits in the desert. She has even tattooed her back with the cat’s spots. She represents the seductive and deceptive hunter that is a cat. Javier Bardem is quite good and colorful, but one has to ask what his purpose in the film is beyond the color and some rather unsubtle foreshadowing. Brad Pitt plays a “cowboy” who appears to have all of the answers but finds himself in just as much trouble as the others. There’s a reason why names are rarely used in this film. These just aren’t people at all. That means we’re just too uninvolved to care when they get taken out.

The presence of Bardem will draw instant comparisons to No Country For Old Men. That’s about the closest film to this one I believe I’ve seen. No Country had a soul outside of the oddness, and at least some of the characters were people we could understand. Bardem gave a chilling and wonderful performance in that piece. Here he is used as window dressing. His exotic performance, bling around the neck of a no-talent rapper with no street cred.

To quote one of my own lyrics, “There must be a message somewhere, but I’ll be damned if I know what it is”. The film looks quite stunning, to be sure. Scott knows how to create a visual world, and The Counsellor is no exception. There are tons of pretty vistas, people and things littered everywhere about the screen. Perhaps the film can best be described as a piece of fine jewelry. It might serve little to no purpose, but it looks good doing nothing. The film is a trophy wife or a jazzed up car. It’s a mid-life crisis with plenty of “why am I here” questions. If the film is to be believed, the answer is not so uplifting. “You see a thing like that, it changes you.”

Gino Sassani is a member of the Southeastern Film Critic's Association (SEFCA). He is a film and television critic based in Tampa, Florida. He's also the Senior Editor here at Upcomingdiscs. Gino started reviewing films in the early 1990's as a segment of his local television show Focus. He's an award-winning recording artist for Omega Records. Gino is currently working on his 8th album Merchants & Mercenaries. Gino took over Upcomingdiscs Dec 1, 2008. He works out of a home theater he calls The Reel World. Favorite films: The Godfather, The Godfather Part II, The Body Snatcher (Val Lewton film with Karloff and Lugosi, not the pod people film), Unforgiven, Gladiator, The Lion King, Jaws, Son Of Frankenstein, The Good, The Bad And The Ugly, and Monsters, Inc.
Hugh Laurie: Live on the Queen Mary (Blu-ray) Only God Forgives (Blu-ray)