Posted in: Disc Reviews by Brent Lorentson on October 25th, 2013 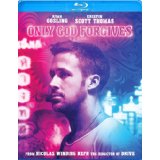 Nicolas Winding Refn is a director who may not be a household name but is easily one of the most unique directors working at this time.  With films like Pusher, Bronson, and Valhalla Rising, he has managed to make a name for himself for doing artistic films filled with beautiful visuals as well as intense violence.  It was the film Drive, though, that most people know him for.  I was already a fan of Refn going into Drive, and for me it is one of the best films I’ve seen in the past decade, where the film is a rare piece of perfection that broods with atmosphere and simply captivates me from the opening frame to the closing credits.  I know the film has its viewers who find it dull; it’s a film that doesn’t attempt to please anyone but simply tells a brilliant tale of love and violence for those looking for more than a brainless romp.

I mention all this because from the moment I first saw the trailer for Only God Forgives, it wasn’t just a film I wanted to see; it was a film that I HAD to see.  The trailer teased more of the same that I loved about Drive, and the images in the promotional materials of Ryan Gosling beaten to a pulp struck a nerve.  But then it had its premiere at Cannes, and the reaction surprised me; people actually seemed to be hating this new film. This didn’t make any sense to me, but it caused me to rein in my expectations, and I believe that is what saved my experience with viewing this film.  This film is nothing like Drive, but feels much closer to Valhalla Rising, not just for its lack of dialog but for its tone and its spiritual nature.

For those that hated Drive and found it dull, I’ll save you the 90 minutes and say don’t see this movie.  This is a film that requires patience and your full attention as well as asking its audience to think while along for the ride.  The plot is straightforward; it follows Julian (Ryan Gosling) on his quest to seek revenge for the murder of his brother.  Julian is no saint, though, as we learn he and his brother deal drugs out of a Thai boxing arena.  And for the sake of argument, one can believe that Julian’s brother deserved what was coming to him after he is found with a dead hooker.  The man responsible for the brother’s death is Chang (Vithaya Pansringarm), a (retired?) cop who exacts his cruel sense of justice with a sword he carries around with him.

The revenge story is only a simple introduction to the more unsettling drama that unfolds once Julian’s mother, Crystal (Kristin Scott Thomas) arrives to claim her dead son’s body.  Crystal is a woman you simply loathe within moments of her walking onto the screen, and as the film progresses (at least for me) I couldn’t wait to see her get what was coming to her.  There is a dinner scene where Crystal verbally emasculates her son while discussing with his girlfriend/hooker how Julian had always been jealous of his brother, and during this scene she all but confesses to an incestuous relationship with her sons.  It’s harsh and unsettling, but that is life in this cruel world that Refn has created for us.

I may have been scratching my head through a lot of this film, but one thing that is impossible to miss is the Oedipus tale that is being played out.  Gosling plays the stoic shell of a man beautifully.  He’s betrayed and broken, looking for a way out of this hellish existence, but can’t seem to pull the trigger himself.  As Chang and Julian’s inevitable collision approaches, it’s hard to gauge if it is even revenge that Julian wants, if he has any desire for anything at all.  And as the film comes to its conclusion, I had so many questions I was relieved to find that the commentary was able to fill in many of the blanks for me.

Despite being a heavy think piece, the two bright points are the films score by Cliff Martinez and the beautiful cinematography by Larry Smith.  There are numerous, beautifully composed tracking shots in the film that are blended so well with the score that had a lesser composer or cinematographer not been on board, this film would have collapsed on its face.  This is a visual masterpiece filled with symbolism, but the script and story just aren’t up to par.  I’m all for a film that can challenge me and can get me riled up by its characters, but still the result fell a bit flat for me.  Perhaps with time the film will grow on me, and I believe it will, but right now, with my first impression the film falls short of what it could have been.

Only God Forgives is presented in its original 1.85:1 aspect ratio.  The 1080p image is arrived at with an average AVC MPEG-4 codec at an average of 23 mbps.  The cinematography, as I mentioned before, is one of the highlights of the film, but unfortunately this transfer isn’t quite up to par.  There are many scenes throughout the film shot with minimal light, but with this transfer a lot of the detail is lost as well as the separation of darks.  A good portion of the film is shot in a red light, which muddles the definition as well, but considering I believe this to be the choice of the director to immerse the Julian character in hell, I don’t have such a problem with this.  As for the few-and-far-between brightly lit or daytime shots, the detail looks great and the facial tones look good.

The DTS Master Audio 5.1 is under used here.  With a good portion of the film being silent, the music is what drives many of the scenes, and thankfully for this we get a great score by Cliff Martinez.  The low digital bass may feel a bit much at times, but I felt it very much belonged in this moody world.  When there is some dialog, it is clear.  The only time the 5.1 audio is put to good use, though, is in the opening scene at the Thai boxing match where the blows and cheers come in from all directions.  Over all this is a decent track, with the score being the driving force behind the film.

Audio Commentary with writer/director Nicolas Winding Refn: This track was pretty much essential viewing for me as I was left scratching my head after my initial viewing of the film.  Refn does a great job navigating us through the film, giving us insight to many of the decisions made during the making of the film.

Behind The Scenes: (23:27) A collection of moments with the director and his crew as we get to see Nicolas Winding Refn blocking shots and working with the actors.  The high point was seeing Refn and the actor playing Chang decide on the sword he plans to use throughout the film.

Director Interviews:  Here we get two separate interviews; neither are too terribly informative but worth a look.

Talking about Thailand with Mark Dinning (6:05)  Refn discusses the supernatural appeal of shooting in Asia as well as discussing how he plans to never break away from shooting chronologically.

Discussing Genre Films with Bruno Igher (5:59) Refn discusses the visual he had which became the springboard for what Only God Forgives would be about as well as mentioning his favorite genre directors.

The Music of Only God Forgives: (9:09) Composer Cliff Martinez discusses how he got into composing scores for film as well as the instruments used to give Only God Forgives its unique sound.

Though the film may not have met my initial expectations, the film still is a refreshing piece of violent art in an era of filmmaking where the directors are afraid to take chances and when studios are looking for the next remake or sequel.  I find it hard to say I recommend this, because the audience that will appreciate this is very small, but if you are looking for an intelligent action film that will challenge you, I’d give this a try.

Brent Lorentson is a horror writer and film critic based out of Tampa, Florida. With a BA in Digital Film, he co-wrote and co-directed Scavenger Hunt. His short stories have appeared in various horror anthologies. In 2019 his short script Fertile Blood will be a part of the anthology horror film Slumber Party. He is currently working on his first novel A Dark and Secret Place set to be released in late 2019. Favorite Films: Taxi Driver, Fight Club, I Saw the Devil, The Wild Bunch, Dawn of the Dead, A Clockwork Orange, Pulp Fiction, Heathers, The Monster Squad, and High Fidelity.
The Counsellor “31 Nights of Terror” Swamp Thing (Blu-Ray)