“31 Nights Of Terror” Monsters Vs Aliens: Cloning Around

Posted in: No Huddle by Brent Lorentson on October 27th, 2013 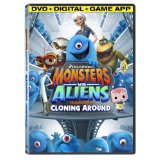 With Kung Fu Panda: Legends of Awesomeness and Dragons: Riders of Berk, it would seem only fitting that Monsters vs. Aliens would get an animated series of its own as well.  Nickelodeon seems to know what they are doing by mass producing these hit DreamWorks animated films and bringing them to the small screen.  The biggest shock is that in doing so they’ve managed to maintain the quality on a story level as well as animation level while under the budget constraints of having to produce multiple episodes as compared to one feature film.

Cloning Around picks up right where the film left off, as Team Monster takes up residence on the secret military testing base, Area Fifty-something.  Before the team can kick back and relax, a new alien threat comes to Earth and makes its stop at the government base, while everyone is scared, with the previous attack fresh in their minds, everyone is ready to attack.  This alien claims to be here as an ambassador to the galaxy to apologize for the recent actions of the aliens that had attacked our planet.  Coverton claims to be our extraterrestrial friend, but can he be trusted?

Each episode is made up of two separate stories, which helps keep the episodes fast-paced and easy to sit through.  Only the first episode runs a solid 22 minutes, and it’s the only one that felt a little dragged out.  As for picking a favorite episode, well, that’s a little difficult considering they’re all pretty good and each managed to squeeze a chuckle out of me.  The Bath Effect is one most can relate to as team captain Susan tries to give B.O.B a bath, but just like giving a dog a bath, he fights her every step of the way; he only gives up once she mentions that baths prevent crankiness, and crankiness just so happens to be the one thing B.O.B fears.  Once he survives his bath B.O.B takes it upon himself to save everyone at the base, and he hunts everyone down to get them nice and sudsy clean.

The silliest episode I have say goes to Danger Wears a Diaper.  It’s the president’s birthday, and it’s up to everyone to make sure the president gets the best present imaginable, and Dr. Cockroach just may have the answer — a gun that can make you look younger.  Already the president has been written as a childish goof who is afraid of just about everything but maintains the personality of an egomaniac.  So when the president sees the effect one blast can have to shave ten years off his appearance, he does the only logical thing and blasts himself again, only this time he’s an infant.  This episode delivered the most laughs that everyone can appreciate, especially those that wouldn’t mind seeing the president take a few jabs at humor’s expense.

Educational Television is an episode that presents a novel approach to helping kids possibly learn something while watching TV.  The Missing Link and B.O.B are trying to enjoy their lazy Saturday, but the cable is out.  The two are given an alien TV that has access to numerous stations throughout the galaxy, but to watch it they are given simple questions to answer to continue viewing; this becomes too much work, and when they answer wrong the TV emits a laser blast which the boys decide to turn into their new toy to create mischief.  Sure, the idea was meant for entertainment purposes, but the idea of having kids answer questions and correct answers allow access to watch television could be an educational tool that could do some real good for the kids of today, not to mention a few adults.

With clever writing that kids and adults can appreciate, Monsters vs. Aliens: Cloning Around is a collection of episodes definitely worth checking out.  As a guy with a six-year-old I find myself grateful for Nickelodeon and DreamWorks putting out these shows, because really there isn’t much out there that both my little girl and I can enjoy watching together, but these shows have been the perfect fit for us.

Brent Lorentson is a horror writer and film critic based out of Tampa, Florida. With a BA in Digital Film, he co-wrote and co-directed Scavenger Hunt. His short stories have appeared in various horror anthologies. In 2019 his short script Fertile Blood will be a part of the anthology horror film Slumber Party. He is currently working on his first novel A Dark and Secret Place set to be released in late 2019. Favorite Films: Taxi Driver, Fight Club, I Saw the Devil, The Wild Bunch, Dawn of the Dead, A Clockwork Orange, Pulp Fiction, Heathers, The Monster Squad, and High Fidelity.
“31 Nights of Terror” Swamp Thing (Blu-Ray) “31 Nights of Terror” All Hallows’ Eve