Posted in: Disc Reviews by Michael Durr on October 26th, 2013 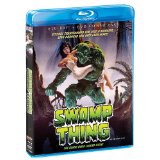 Welcome kids to another 31 Nights of Terror spectacular. This time, the legendary (in his own mind) Michael Durr has descended from the rafters to bring you another cult classic blu-ray presentation. This time we explore 1982 Wes Craven adaption of Swamp Thing. Shout Factory has produced an excellent blu-ray for us to watch. As with most of the Scream Factory work that Shout does, this should be quite the treat. Let us continue and go forth with one wicked green monster.

Not Long Ago in the Unexplored Reaches of an Unmapped Swamp, the Creative Genius of One Man Collided with an Other’s Evil Dream and a Monster was Born. Too Powerful to be Destroyed, Too Intelligent to be Captured. This Being Still Pursues its Single Dream.

The Coast Guard flies over in a helicopter to its swampy destination. Alice Cable (played by Adrienne Barbeau) looks over the area as she listens to Charlie (played by Al Ruban) tell her of the events that have led up to her arrival. Sounds continue to emanate from the swamp but that’s only the start of what is going on the ground beneath them. In fact, there is a band of renegades that are scoping out the area.

Soon, Alice and Charlie touch ground and are met by the research team on the swamp. They also meet Ritter (played by Don Knight) who acts as a strong hand and leader of the ground crew. Meanwhile, we watch a scientist in the swamp get surrounded by the same renegades we saw earlier. Unfortunately, his fate is not a good one as he gets caught and then subjected to a vicious snake bite.

While this is going on, Alice is still being shown around the quarters where she gets to see her bedding arrangements and more. She asks about Dr. Alec Holland (played by Ray Wise) who she soon meets along with Alec’s sister, Linda (played by Nannette Brown) who is also a doctor. They are working on plant research and are getting closer to their ultimate goal of creating a new organism for the 21st century.

However, they break momentarily as Alec and Alice decide to check out one of the malfunctioning sensors in Sector 3. They confirm their suspicions that the sensor was indeed sabotaged and go back to camp. As it turns out when they get back to the camp, Linda has stumbled onto quite the discovery. Her potion might be the explosive link that they need to get their research the final kick it needs. The excited threesome work on a couple of further experiments. But they are not alone as renegades storm the camp and eventually make their way to the team below.

A little spoiler, but Dr. Holland eventually turns into the Swamp Thing and then we have quite the interesting movie. The renegades are actually led by Arcane (played by Louis Jourdan) who does a great job being the villain of the film who tries to obtain Holland’s plant research. Also of mention was the amazing job, Dick Durock did in the costume of the Swamp Thing.

The film has always been described as a bit campy. Adrienne Barbeau who was most well known from John Carpenter flics like Escape from New York and The Fog wasn’t exactly memorable here. In fact, she is more well known in this film for doing a nude scene that only was seen in England (and an accidental US DVD). The only other female in this film, Nannette Brown has mostly a throw away part too.

But of note we should mention Reggie Batts who plays Jude, a 9 year old kid who is running a gas station and shares a good chunk of adventure with Alice Cable. His frankness, his character and general excitement breathes a lot of life into this film when he is on screen. It is interesting that outside of the renegades, there really are not a lot of extras included in the flic, but this had more to do with the complete lack of budget that was chopped every time the crew turned around.

However, the most enduring thing this movie has going for it is that it is not another creature or super hero movie. It is almost a borderline love story with the interaction between Alice Cable and Dr. Holland’s character. That is what led this film to critical acclaim from the most unexpected of harsh critics, Siskel and Ebert who gave this film two thumbs up. It is a shame that this film was constantly hit by budget concerns as it could even had more depth than it already had.

The video is presented in 1.78:1 widescreen at 1080P. This film is actually shot in Charleston, South Carolina near John’s Island. Shout Factory has done an excellent job of restoration and the color is quite good and the swamp has never looked better. Color is sharp, and even though the definition has taken a chunk out of the realism, it is still a fun movie to watch visually. The natural lighting does a lot of good here and the shadows never deter from the detail. Great presentation.

The audio is presented in 2.0 DTS-HD English Master Audio. The sound is really good here despite the cheesy eighties music and basic sound effects (check out the groovy explosions!) Dialog is excellent and there is no problem understanding any voices or speeches. Sometimes, it does hollow out and there are echoes occasionally. But none is going to distract the listener too much as it is certainly a product of its era. Subtitles are included for English.

Swamp Thing thanks to the medium of vhs, dvd and now blu-ray has made back its budget of three million dollars, many times over. However, it has taken a while in the movie world for this flic to overcome the all too often criticism about Swamp Thing, a rubber suit monster movie. The film might be a bit campy, but it is also a lot of fun. There are strong performances from Louis Jourdan and Reggie Batts, and the role that would define Dick Durock for his entire career.

Shout Factory has produced a fantastic disc with great video and audio. There are also a ton of extras provided which should make even casual film fans more appreciative of trials and tribulations that this production went through. This is a very easy recommendation on the merits of the disc alone. Put that together with a flic that goes far beyond its rubber suit impressions and you will have a fine way to spend a Friday night. Enjoy.

Michael Durr has been reviewing movies for the better part of fifteen years now. He primarily enjoys thrillers, sci-fi, animation and even a little courtroom drama. His favorite films include Escape from New York, the Goonies and anything with Alyssa Milano. When he’s not praising Kurt Russell as the greatest actor of our time or scratching his head over a David Lynch flick, he’s spending time at home in Texas with his lovely wife, Lori and his amazing son. How they put up with him is a mystery, but even Basil Rathbone doesn’t have the time to solve that one.
Only God Forgives (Blu-ray) “31 Nights Of Terror” Monsters Vs Aliens: Cloning Around