“31 Nights of Terror” All Hallows’ Eve 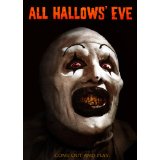 Those of us who love horror movies can remember the first great scare we ever got. (To be fair, those of you who hate horror movies probably remember the first scare you ever got too, since it’s probably why you stopped watching them.) Stephen King’s It wasn’t my first scary flick, but the image of Tim Curry’s Pennywise coaxing poor Georgie into the storm drain seared itself into my brain and became my original childhood freak-out. What I enjoyed most about All Hallows’ Eve is that it tapped into the unique impact a genuinely scary clown movie can have.

The film quickly introduces us to babysitter Sarah (Katie Maguire) and her two bickering young charges, Timmy (Cole Mathewson) and Tia (Sydney Freihofer), on Halloween night. As they go through their trick or treat haul, Timmy discovers an unmarked VHS tape in his bag. The kids convince a hesitant Sarah to let them see what’s on the tape. What follows is a trio of unsettling, woman-in-peril horror tales. Each segment also features appearances by the mute, diabolical Art the Clown (Mike Giannelli). As if that weren’t scary enough, Sarah and the kids start noticing strange happenings in their own house. Is it their active imaginations playing tricks on them or something far more sinister?

I hesitate to call this an anthology because all the segments in All Hallows’ Eve were directed by the same person. Damien Leone, who also wrote and edited the film, first introduced Art the Clown in a 2008 short called The 9th Circle. The unholy prankster resurfaced in Leone’s 2011 short Terrifier, which became the third segment in All Hallows’ Eve. Still, it’s clear Leone’s relationship with (and affection for) the horror genre goes back much further.

All Hallows’ Eve, which clocks in at a sleek 82 minutes, features some fun Easter eggs for horror fans. Before popping in the mysterious tape, the kids are watching George A. Romero’s Night of the Living Dead on TV, and their conspicuous house number is 237, a nod to The Shining. There’s also the inherent danger of being a babysitter on Halloween, and the mysterious allure of an unmarked videotape. (Of course, if this same scenario happened in my house, the film would be over in less than 10 minutes because I haven’t owned a VCR in at least five years.) Leone clearly has a sense of reverence for the horror films that came before his, but he also comes up with some strong scares of his own. The first segment — featuring a train station kidnapping and a satanic cult — includes some particularly grotesque and surreal imagery, which is especially effective when you consider the shoestring budget.

More importantly, Leone plays it totally straight with these violent stories rather than winking at his audience to assure us that he knows how cheesy this all is. (Think Robert Rodriguez for the better part of the last decade.) Like Rodriguez — and fellow ultra-talented cohort Quentin Tarantino — Leone goes for an intentionally old-fashioned/lo-fi presentation, only he’s not quite as overt about it. The third segment — about a costume designer who runs out of gas in the wrong part of town and encounters the murderous Art the Clown — is actually the only one that features the intentionally grainy, down-and-dirty look of‘70s cinema. Instead, the lo-fi atmosphere in All Hallows’ Eve is mostly achieved thanks to a cool, synth-heavy soundtrack courtesy of Noir Deco and the incidental cheesiness of the story. (I’m thinking of the alien who terrorizes the heroine of the second segment, the weakest of the bunch.)

This no-nonsense attitude extends to the acting. While the performances can be occasionally stilted, they’re never anything less than credible and none of the actors are asked to ham it up for the camera. The three heroines in the VHS segments ably carry their stories, while Maguire is a solid anchor for the film, even if her character fails spectacularly as a babysitter. (Maybe it’s just me, but I probably would’ve stopped the videotape before the tweens got a chance to see the scene with a pregnant woman’s stomach being sliced open.) Meanwhile, Giannelli never says a word as Art the Clown, but his demonic glee combined with some nifty makeup effects completely sell this nightmarish character.

Early on in the film, one of the kids argues that they should be allowed to watch the tape because “it can’t be worse than the stuff we see on the Internet every day.” If nothing else, All Hallows’ Eve can be viewed as an extreme cautionary tale about what happens when you let kids see a scary movie before they’re ready. This is one of the best horror offerings I’ve seen in a while. So if you can get your hands on a copy in time for Halloween, follow Timmy and Tia’s lead and “let’s watch it.”