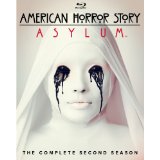 The following cautionary tale is brought to you by the folks at Fox and American Horror Story:Asylum out on DVD/Blu-ray.

Whilst the criminally insane remain under the care of sadistic medical staff in the second chapter of the Emmy winning series, American Horror Story: Asylum, released this week, we are going to look at our favorite medical villains who prescribe the maximum dose of patient dread and suffering. Are you sure you want that warm sponge-bath sir …?

NURSE RATCHED – ONE FLEW OVER THE CUCKOOS NEST

Who could forget Louise Fletcher’s chilling portrayal of the sadistic head of a mental institution in Milos Forman’s One Flew over the Cuckoos Nest?  To the outside world she appears to possess all the skills of a high quality carer. She is organized, well presented and seemingly professional. Inside the chilly walls of the institution however, Ratched acquires the persona of ‘Big nurse’, abusing her superiority over her patients in a tyrannical and villainous fashion. Grown men, including the great Jack Nicholson, cower and quiver at the slightest gaze of the nurse who often sends the inmates into a world of total devastation and suffering within a matter of minutes.

Harrison Ford delivers an assured performance as Dr. Norman Spencer in Robert Zemeckis’s hit psychological thriller, What Lies Beneath.  Dr. Spencer appears to be a hard-working and loyal spouse.  However, his wife Claire, played by Michelle Pfeiffer, begins to suspect that her husband might have been having an affair with a young woman who was found dead in the lake by their family home. Sound suspicious? As the narrative untangles, Claire begins to piece this mystery together and finds evidence incriminating her husband of the young girl’s murder. The doctor consequently strikes with a paralysing dose of chloroform and attempts to drown her in a filling bathtub!

BENIGNO MARTIN – TALK TO HER

Madcap auteur and maverick of contemporary Spanish cinema, Pedro Almodovar, is no stranger to developing dark and complex characters. Benigno is a personal nurse and caregiver for Alica, a beautiful dance student who tragically lies in a coma. Benigno sees her as alive and often shares his innermost feelings with her whilst she sleeps. Almodovar shows us that Benigno has in fact been obsessive about this young woman way before her accident, frequently following her and engineering a chance meeting.  As the story progresses we learn that the comatosed Lydia is pregnant and Benigno becomes the main guilty suspect.

The whistled notes to the theme of Twisted Nerve have become one of the most iconic soundscapes to modern popular cinema. The said whistler and hit-woman, Elle Driver, is employed by Bill to execute the bride played by Uma Thurman. Equipped with a lethal syringe and ironically sexualized nurse outfit, Nurse Driver is the true definition of the femme fatale.

When a popular fiction writer is involved in a nasty car accident, a saviour materialises in the form of Annie Wilkes, an ex-maternity nurse and obsessive fan of the author. The alleged ‘care’ however takes a turn for the sinister. Annie begins to show her true characteristics as a lonely lunatic and demands the writer to bring his most famous character back from the dead.  Increasingly threatened and mutilated with painful torture, the literary patient can do nothing more than submit to the nurse’s insanity.

James Bolam portrays British serial Killer in a compelling TV Movie that follows the story of Dr. Harold Shipman, a general practitioner who throughout his career is believed to have killed as many as 250 of his patients.

Gino Sassani is a member of the Southeastern Film Critic's Association (SEFCA). He is a film and television critic based in Tampa, Florida. He's also the Senior Editor here at Upcomingdiscs. Gino started reviewing films in the early 1990's as a segment of his local television show Focus. He's an award-winning recording artist for Omega Records. Gino is currently working on his 8th album Merchants & Mercenaries. Gino took over Upcomingdiscs Dec 1, 2008. He works out of a home theater he calls The Reel World. Favorite films: The Godfather, The Godfather Part II, The Body Snatcher (Val Lewton film with Karloff and Lugosi, not the pod people film), Unforgiven, Gladiator, The Lion King, Jaws, Son Of Frankenstein, The Good, The Bad And The Ugly, and Monsters, Inc.
“31 Nights of Terror” All Hallows’ Eve Free Samples