Posted in: No Huddle by Archive Authors on October 29th, 2013 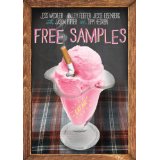 Independent films can be about just about anything. Usually if it’s about something you have never seen before, that can be a good thing. In this case, I’m not so sure. Free Samples is a movie that takes place almost entirely in and around a crappy little van giving away a cup of either chocolate or vanilla ice cream or at least something that resembles ice cream as far as we know. Free Samples is an existential comedy about the search for meaning when you step away from a future that looked very bright in search of who knows what.

Jesse Weixler plays Jillian, who is a law student taking time off to paint, think and drink excessively. After a night of too much booze in which various people wind up in an apartment not knowing how they got there, Jillian’s girlfriend begs her to do her a huge favor and fill in for her on the free ice cream truck for just a few hours. Jillian is bitter, angry, hung over, and not very amenable to this unpalatable idea but gets bullied into it anyway, but she’s not going to do the visor. It’s bad enough she’s forced into a t-shirt that displays how unendowed she is in the bosom department.

Then the movie becomes an exercise in introducing characters who drift in and out and sometimes in again to vie for our attention whether they deserve it or not. Some do deserve our attention. Some not so much. The one person who definitely deserves our attention is the legendary actress Tippi Hedren (famous muse of Alfred Hitchcock and mother of Melanie Griffith). Hedren plays a woman with a walker who ambles up for her regular free cup of ice cream and regular dose of conversation. She was a starlet once with a tragic love story to tell. She is one of the few people who cracks Jillian’s gruff exterior. Hedren is radiant in her old age and is someone who holds your attention for every moment she is on the screen. Two other visitors to her upchuck truck are Jason Ritter (son of John) as a less than charming but somewhat likeable friend who so far does not get benefits, and the mysterious Tex (Jesse Eisenberg) who spent the night in her bed but who she knows nothing about. Jillian also gets a completely coincidental encounter with everything she had been running away from in her life.

Jillian is living in this little existential purgatory that is like Waiting For Godot for slackers. She encounters a parade of unlikely and exhausting exhibits of everything you don’t want to deal with when you have a hangover. The thing that holds her together and protects her is an armor of sarcasm.

The question you have to ask is what do you expect from a movie? Do you demand an epic story with lush scenery and spectacular production values? Like Jillian, I’m giving in to sarcasm because you will get none of that. You will get a form of minimalism with a dash of nihilism thrown in. It is also a good-natured film that hides it’s sweetness underneath its obnoxiousness. Jess Weixler (Teeth) hides her good looks under a bag of tricks of awkward expressions and rag-doll body movements. Jesse Eisenberg gets a role where he gets to play the cool and attractive guy for a change; it’s a nice change, and he pulls off his part exceptionally well.

The problem with a film like this is that it is not believable enough to score under its dramatic credentials, and the comedy does not hit the target often enough to get word of mouth going on something this offbeat.

I think the overwhelming bulk of these kinds of indie comedies precludes anything but the smallest fraction breaking through to have any impact or success. I approached this movie kind of expecting it was a stray dog of a movie, and I was pleasantly surprised at how much I enjoyed it. In other words, it was more fun and enjoyable than it had any right to be. It will fade into obscurity like most of these films, but I will definitely want to see more of Jess Weixler in the future. Tippie Hedren probably did this as a whim, but I would love to see her more as well. Jesse Eisenberg is a big star, so I know I’ll be seeing more of him. That being said, Jess and Jesse are a good couple.

“31 Nights Of Terror” Big Screen Medical Staff You Wouldn’t Want By Your Bedside The Way, Way Back (Blu-ray)