The Way, Way Back (Blu-ray)

Posted in: Disc Reviews by Jeremy Butler on October 29th, 2013 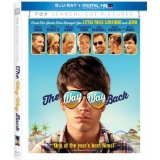 Every once in a while a film comes along that looks like it could be interesting, but you don’t really expect to like it all that much. It’s simply meant to be filler, something to kill time until something better comes along, but somehow you get drawn in and become so engrossed in the story that you forget everything else. That is the most apt description of my experience with The Way, Way Back, a socially awkward dramedy with a ton of heart featuring Steve Carrell, Sam Rockwell, Toni Collette, Liam James, and many more.

Duncan (Liam James, The Killing) is an introverted, slightly awkward fourteen-year-old. After his parents’ divorce, his mother Pam (Toni Collette, United States of Tara) starts dating Trent (Steve Carrell, The Incredible Burt Wonderstone), a single father who masks his disdain for Duncan with thinly veiled accusations and comments. For the summer, Duncan is dragged along with the couple and Trent’s daughter Steph (who treats him like a pariah) to Trent’s family beach house.

Upon their arrival, Duncan is essentially shunned by everyone; his mother and Trent spend all of their time with vacationing couple Kip and Joan (Rob Corddry and Amanda Peet respectively); Steph and her friends want nothing to do with Duncan, though one of her friends, Susanna (AnnaSophia Robb, The Carrie Diaries) does manage to spark Duncan’s interest; Duncan is a fish out of water, resigned to a miserable summer. That all changes with the introduction of the Water Wiz Water Park and the park’s witty resident lifer Owen (Sam Rockwell, Seven Psychopaths) into Duncan’s seemingly lonely life. After meeting the young lad, Owen takes Duncan under his wing, and it is then that Duncan begins to truly live for the first time in his life.

This will likely be the most underrated movie of the summer. I truly hope for that statement to be proven wrong, but my gut tells me otherwise given that the film lacks the usual attributes of a summer blockbuster such as expensive action sequences and gorgeous bombshells. What the movie does have is quick-witted humor and a lot of heart. The Way Way Back is a story worth telling that reaches out for every person who is different and is searching for a place to belong.

The film’s cast was the best part of the film in my opinion; unfortunately I simply lack the time to praise each member of the star-studded cast individually, so let’s stick with the most significant: Rockwell was hilariously entertaining, trading wisecracks with pretty much every member of the cast. More so, it was even better to watch him assume a father figure role over James’ character; taking him under his wing, dispensing advice and philosophy on how to live; Rockwell’s portrayal perfectly illustrated his range as an actor. Carrell also displayed his range, creating contrast by shedding his usual likeable funny man persona for a taunting and callous personality. The most impressive performance came from the lead, Liam James, however. James was the glue for the project; the entire project rested on his shoulders, and he handled it like a veteran. He lived the role, giving one of the most authentic socially awkward performances I’ve seen in quite some time. I expect to be seeing much more of Liam James in the future.

The Way, Way Back is presented in its original aspect ratio of 1.85:1. The 1080p image is arrived at with an AVC MPEG-4 codec at an average 32 mbps. This is one of those films that just looks natural. Colors don’t pop off the screen, and there aren’t going to be a lot of flashy moments. What you get instead is a sweet, sharp picture that provides you with a clear window into this summer world. Exteriors are bright without washing away the image detail. Black levels are better than average, but there isn’t a lot of shadow definition necessary on this one. Darkness is rare.

The DTS-HD Master Audio 5.1 is not going to blow the doors off your system. Again, it’s the natural elements that make this work. The audio presentation isn’t there to intrude, so don’t look for heavy sub action or rousing score moments. Actually, the score is loaded with plenty of songs that mirror the moods and feelings on the film. Dialog is always clear and upfront. Surrounds are usually subtle, there to provide you with that one last push of realism.

Deleted Scenes: (3:00) There are three scenes with a handy play-all option. Nothing that didn’t serve better on the cutting room floor.

Behind The Scenes With The Hilarious Cast & Filmmakers: (31:19) This is a collection of six fairly brief segments on The Script, The Cast, The Shoot, Characters, Nat & Jim and Sundance. There is a play-all option.

Theatrical Behind The Scenes: This is a three-part feature with more brief segments: Tour Of The Water Park (3:20), The Filmmakers Jim & Nat (3:16) and Ensemble Featurette (4:26).

I genuinely believe The Way, Way Back to be a story worth telling. So I implore my readers to see the movie and tell your friends; it is a good family experience worth the time and money spent.

Jeremy Butler is a film school graduate of the International Academy of Design and Technology. He is been writing for Upcomingdiscs since 2012; however, movies have played a big part of his life for much longer. Favorite genres include horror, science fiction/fantasy, and comedy. Favorite movies are V for Vendetta, Boondocks Saints, Kiss Kiss Bang Bang, and The Godfather.
Free Samples Monsters University (Blu-ray)