Posted in: No Huddle by Jeremy Butler on November 1st, 2013 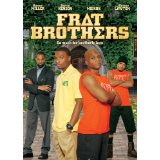 Ever since the release of Step Up and Stomp the Yard, there have been no shortage of sequels or similar dance movies looking to capitalize on the same success, and when Frat Brothers came across my radar, I expected more of the same; that is not what I got. On the back cover of the disc, the tagline reads: “Sometimes you have to create your own destiny.” That is exactly what the film does, going beyond the expected parameters of a dance movie and forging its own play just as its lead character does.

Legacy, tradition, and family: these are the principles that Kyle (Mishon, Lincoln Heights) and Q’s (Richard John Reliford, General Hospital) father instilled in them (in that order) at a young age. Born into the legacy of the Delta Gamma Gamma, the only pathway that has ever been laid out for them is to follow in the footsteps of their grandfather and their uncle, as well as their father and pledge Delta Gamma Gamma. This fate has always been fine with Q, who wants nothing more than to make his father proud and become a Gamma. Kyle, however, has questioned the pathway in front of him for quite some time simply going along to appease his brother and his father. As the time to pledge comes closer, Kyle really starts to believe that being part of his family legacy is not the right path for him, especially considering it would mean being under the thumb of Derrick (Romeo Miller, Madea’s Witness Protection) a pledge-master with a clear vendetta against him.

When the day approaches and it is time to choose, Kyle shocks his family by forgoing his family’s legacy and going his own way by pledging a rival fraternity. The effect this decision has on his relationship with his father and brother is instantaneous, as Kyle quickly finds himself on the outs with both of them. Now left with only the loyalty of his fellow pledges as well as the affection of his on-again off-again sweetheart Nia (Ashley A. Williams), Kyle must travel this new road and hopefully create his own legacy.

This is not your average dance movie; in fact, I would say that the dancing aspect plays a very small role in the overall theme of the film. This film is truly about the importance of respecting tradition but ultimately knowing the importance of making your own way in the world. Highlighted extremely well, Mishon does a good job from the very beginning illustrating his character’s hesitation to follow in his family’s footsteps and make his own way. All together the acting is actually somewhat sub-par, but fortunately the strength of the story adds to the strength of the actor’s performances. Here’s an example: during a confrontation scene between Kyle and Q, I did not feel the emphasis of the anger truly emanating from either brother; their speech was too quiet and tame given that they were clearly supposed to be upset with one another, however, the dialog and what the scene represented managed to bolster the actors’ portrayals.

The pacing for the film was pretty good, and the film does a good job of balancing all of its different aspects, although the constant fluctuation of the lead’s relationship with his love interest did become a bit tedious towards the middle of the film. My suggestion would have been not to get rid of that aspect completely but perhaps to downplay it a bit more in the beginning. From the beginning, their relationship keeps that make-up, break-up energy, but around the third time they are in this state, as an audience member I became bored with it. I feel it would have been better to have them simply be happy and then have the stress of pledging and the constant flirtation from his rival be what drove a wedge between the two; other than that I saw no issue with how the relationship unfolded within the story, which was decent.

Jeremy Butler is a film school graduate of the International Academy of Design and Technology. He is been writing for Upcomingdiscs since 2012; however, movies have played a big part of his life for much longer. Favorite genres include horror, science fiction/fantasy, and comedy. Favorite movies are V for Vendetta, Boondocks Saints, Kiss Kiss Bang Bang, and The Godfather.
Ender’s Game Last Vegas