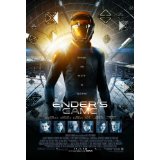 “In the moment when I truly understand my enemy — understand him well enough to defeat him —then in that very moment, I also love him.”

It’s no accident that both soldiers and football players are fashioned to look indistinguishable from one another on their respective battlegrounds. We create a personal detachment between ourselves and our adversaries because we believe that will make it easier to annihilate them. That’s one of the many provocative ideas in Ender’s Game, the consistently dazzling and occasionally rushed adaptation of Orson Scott Card’s beloved science fiction book. (Of course, the author himself is considerably less beloved these days.) I can mostly forgive the film for feeling a little hurried because fans have waiting a long time for this one.

The movie opens with a quick, CliffsNotes recounting of the devastating alien attack that wiped out 10 million people 50 years earlier. To prepare for what it believes to be an impending follow-up invasion, the International Fleet has recruited and trained the brightest young minds in the world in search of its next leader. Col. Graff (Harrison Ford) is the director of training at the Battle School that orbits the Earth, and he identifies the strategically brilliant Andrew “Ender” Wiggin as our next last great hope.

“The purpose of this war is to prevent all future wars.”

Ender truly earns his nickname after violently and definitively putting down an aggressive classmate. As he rapidly progresses through Battle School — and, later, the higher-stakes Command School — Ender gains allies (including Hailee Steinfeld’s sure-shot Petra) and enemies (most notably Moises Arias’ Bonzo Madrid, who makes for a terrifically nasty little bully). This is all done under the watchful eye of Col. Graff and Maj. Anderson (Viola Davis). Ben Kingsley also pops up once Ender reaches Command School as his toughest, most qualified instructor. Although Ender wants to protect Earth — and his beloved sister Valentine (Abigail Breslin) — from another attack, he starts to question the motivation behind his mission as he becomes more connected to the alien Formics.

Card has written a handful of follow-ups, but the first book was published in 1985. That places the novel immediately after two thematically similar sci-fi films: 1983’s WarGames and 1984’s The Last Starfigher. (It’s important to note, however, those movies were both preceded by Card’s original “Ender’s Game” short story published in 1977.) In other words, the idea that the fate of the world rests in the extraordinarily skilled hands of an unwitting child isn’t exactly new. I totally buy into the notion that a bright, younger mind is more receptive to new concepts and not yet weighed down by uniquely adult complexities. However, I do wish the movie had done a better job connecting the dots between believing the children are our future and placing the entire burden of defending our planet on their narrow shoulders. (This is especially vexing when you consider that humanity’s last great hero, Mazer Rackham, was presumably an adult.)

Ender’s Game has been adapted by writer/director Gavin Hood. Fans of the book probably weren’t jumping for joy when they found out the guy who made X-Men Origins: Wolverine would be making the movie. Hood wisely focuses the bulk of the film’s action in Battle School and Command School, which allows the director to give us some eye-popping sequences inside a simulator and some nifty zero-gravity action. (It’s not Hood’s fault that Gravity has made any other zero-gravity sequences pale in comparison.) Thankfully, Hood — who also directed Tsotsi, the bleak 2005 South African drama that won the Best Foreign Language Film Oscar — doesn’t shy away from the story’s darker ideas. Those ideas include the crushing, alienating weight of being truly extraordinary, and the tenuous leap between playing at war and being at war.

The film clocks in at 114 minutes, but — given all the world-building Hood had to do with the opening entry in what Summitt Entertainment certainly hopes becomes its next big franchise — I actually wouldn’t have minded a slightly longer cut.

Those of us who didn’t read the book can fill in the gaps well enough. For example, Ender’s older siblings were previously deemed too violent (hot-head Peter) or too compassionate (Valentine) for the International Fleet, which suggests Ender is “just right.” On top of that, Ender is derisively referred to as a “third”, which only tangentially suggests a future Earth plagued with overpopulation. The film also features some extravagant animated sequences set inside a handheld virtual challenge called “Mind Game.” They wind up being significant in the end, but as they’re happening, they merely look like the world’s most sophisticated app for your tablet.

Among the talented cast, only Asa Butterfield gets to extensively explore his character. The young actor has some of the bluest eyes I’ve ever seen, and he previously used those expressive orbs to melancholy effect as the title character in Hugo. Here, they serve as an essential window into Ender’s isolation and inner conflict because the character is outwardly somewhat of a cold fish. At this point of his career, Ford gives off an air of unforced authority that is both credible and pleasing. (Even more pleasing than seeing him in his first sci-fi project in a long time.) On the other hand, I feel like a different actor would’ve been more successful in playing up Col. Graff’s manipulative tendencies.

Kingsley is fine, but his Maori character’s facial tattoos leave a more lasting impression than anything the actor did. Davis doesn’t do much besides furrow her brow and quibble with Col. Graff over Ender’s training, while Breslin is solely there to connect Ender with a friendly face back home. You get the sense some of these characters (especially Breslin’s Valentine) could make a bigger impact in any potential Ender’s Game sequels.

Of course, there have been enough franchise false starts to suggest that studios and filmmakers shouldn’t save material for sequels that may never get made. As far as I’m concerned, the surest way to success is to make the best possible movie now; with a little luck, people will react strongly and demand more. That being said, Ender’s Game has enough spectacle and intriguing ideas to make me want to see more of this universe, so I hope audiences don’t respond with a big, fat “game over.”