Posted in: The Reel World by Jeremy Butler on November 1st, 2013 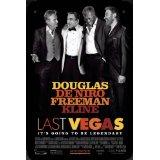 Douglas, Freeman, Kline, and De Niro: four legendary actors band together in a single film and it’s a comedy no less; it’s not the first time that this has been heard of; however, not sure that it has ever been done with such style. It’s good to see four actors who you would normally see doing serious movies goof off and have a little fun, and by the looks of it, they had plenty of fun doing it. The Flatbush Four, Billy (Michael Douglas), Patty (Robert De Niro), Archie (Morgan Freeman), and Sammy (Kevin Kline) are four friends from Brooklyn who grew up together. Their bond was unshakable, and only they were allowed to make fun of one another, a rule that was enforced by Patty on several occasions. Growing up, it was these four against the world, and eventually they would take the world by storm.

Almost sixty years later, the Flatbush Four are no more in a sense. Now all old men, the group has long since disbanded and they are separated all over the U.S: Billy is out in Malibu, living with a woman half his age, Patty lives a solitary life of misery after the death of his wife, Sammy is equally miserable and bored living in Florida with his wife, and Archie after a mild stroke is relegated to living with his son and family where he is treated like an invalid. But when Billy calls with news of his upcoming wedding to his child bride (as the others refer to her), these four reunite for the first time in years in the only place suitable to house a wedding as well as a bachelor party: Vegas, and what a legendary weekend it turned into.

Naturally I expected good individual performances given this steep talent pool; however, the film’s best moments come from the ensemble or the pairings of two of the four, primarily Douglas and De Niro as well as Kline and Freeman. Kline and Freeman are the funnier pair, chock full of quips and smartass remarks, while Douglas and De Niro provide more the film’s depth as best friends who are more like former friends after a rift. In the end each one of these icons brought something to the table: Kline was my favorite without question (Freeman and De Niro being closed); he was simply the life of the party and a man on a mission, looking to make the most of his weekend away and all the debauchery that comes with it. De Niro acted as the film’s moral center and the voice of reason that kept everything in perspective, Freeman embodied the importance of embracing life fully, and Douglas revealed the importance of surrounding yourself with the right people.

This is a good time movie; it’s not meant to leave a lasting impression, it’s simply meant to make you laugh, and it achieves that goal extremely well. It has a few running gags and one cameo that turned out pretty funny, but the bulk of the comedy came from lines delivered by mostly Kline and Freeman, they were truly the comedic duo this go around, and the chemistry in their scenes made me as a member of the audience crave more. No disrespect to De Niro or Douglas, but if this film only had Kline and Freeman, I might have been just fine with it all the same. That said, the ensemble as a whole is not to be ignored; plenty of good jokes came from the four sharing the screen; the scene where the four host the bikini contest was a particular favorite, however, I doubt anything outranks the scene where they got revenge on a young guy who needed to be humbled.

Also to its credit, the film manages to find the balance between hilarious comedy and heartfelt bromance; it has just the right level of raunchiness without going overboard, and just the right level heart without becoming too sappy; it walks the line better than most movies that I have seen this season and has earned its way into becoming one of the best comedy of the season in my opinion.

Jeremy Butler is a film school graduate of the International Academy of Design and Technology. He is been writing for Upcomingdiscs since 2012; however, movies have played a big part of his life for much longer. Favorite genres include horror, science fiction/fantasy, and comedy. Favorite movies are V for Vendetta, Boondocks Saints, Kiss Kiss Bang Bang, and The Godfather.
Frat Brothers Bonnie & Clyde: Justified