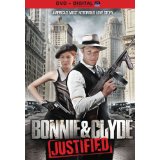 Although they were brutally gunned down almost 80 years ago, everyone knows the names “Bonnie & Clyde”, even if they’re only familiar with the bank-robbing basics. Don’t look now, but Arthur Penn’s landmark, definitive Bonnie & Clyde film — with Warren Beatty and Faye Dunaway in the title roles — came out 46 years ago, so I imagine there’s a large segment of younger movie fans who haven’t seen the story of Bonnie Parker and Clyde Barrow play out on screen. The ultra low-budget Bonnie & Clyde: Justified arrives just in time to capitalize coincide with December’s star-studded, multi-network miniseries that will surely raise the notorious duo’s pop culture profile once again.

“Now the tale I’m about to tell you is the truth, the author’s side. And if anyone tells you different, then they didn’t know Bonnie & Clyde.”

Bonnie & Clyde: Justified actually has an intriguing hook. Director David DeCoteau and writer Rolfe Kanefsky seem to have found their inspiration in the poems/diaries of the real-life Bonnie Parker. (Particularly “The Trail’s End”, which later became known as “The Story of Bonnie and Clyde.”) The film is also billed as “an incredible love story,” so it’s no surprise to see the filmmakers take a somewhat sympathetic approach to their subjects. (In case the movie’s title wasn’t a big enough clue.)

“They have committed every crime you can imagine, as if they’re our heroes. They’re not.”

The movie actually opens in 1934, with former Texas Ranger Frank Hamer (Eric Roberts) promising to bring down Bonnie and Clyde with his posse. (***80-YEAR-OLD SPOILER ALERT***He succeeds***END OF 80-YEAR-OLD SPOILER ALERT***) After briefly showing us the pair on their last, ill-fated car trip, the action jumps back to 1926 when Bonnie (Ashley Hayes) was a 15-year-old girl with a weakness for bad boys who married high school sweetheart Roy Thornton (Julian Brand). Meanwhile, Clyde (Jim Poole) was already up to no good, stealing a turkey truck with older brother Buck (Hagen Mills).

Bonnie & Clyde: Justified chronicles the couple’s first meeting through a mutual friend in 1930, the beginning of their crime spree — which eventually included the addition of Buck, along with his pious wife Blanche (Jean Louise O’Sullivan) — and, of course, their iconically violent deat…wait a minute…did this movie really just bail out on showing us the end of Bonnie and Clyde’s life?

I realize some people were perturbed when Steven Spielberg’s Lincoln passed on showing us the president’s assassination. However, that movie is really about the passing of the 13thamendment — rather than a comprehensive survey of Lincoln’s life — so I didn’t mind the choice. On the other hand, it seems like the makers of Bonnie & Clyde: Justified — which purported to show their troubled, tumultuous lives and deaths — simply ran out of money. The director appears to be going for a Butch and Sundance-esque effect, but instead it really looks like your DVD copy of the movie just froze.

Of course, that sort of miscalculation could be overlooked if that were the extent of this low-budget production’s ineptitude. Instead of staging any robberies, we only see Bonnie and Clyde run into a building, then run back out less than a minute later with a bag of loot. (Although they are mostly known as bank robbers, the film at least rightly shows that Clyde preferred to rob gas stations and convenience stores.) We see the duo capture and humiliate law enforcement officials, but we’re never shown any of the ones they actually kill.

It’s clear the filmmakers have chosen to focus on a romanticized version of Bonnie & Clyde; that might be misguided to some — and downright offensive to others — but at least it’s a definitive choice. The problem is the acting and plotting on this project aren’t strong enough to support it. There’s decent chemistry on display during the couple’s first meeting, but the movie doesn’t make Bonnie’s rapid leap from digging bad boys to becoming an accessory to armed robbery believable. (Especially since she’d been previously burned by her “bad boy” hubby.)

The film clocks in at a sleek 90 minutes, but it feels like 20 percent of the screen time is spent scanning through shoddy, fake newspaper articles about the couple (the headlines are legible, but the actual stories are a bunch of squiggly lines), or watching them pose for provocative pictures. I understand the notion that their exploits captured the public’s imagination, but when you see Bonnie and Co. posing for the same picture multiple times, it just feels like the director is blatantly trying to pad his running time.

It doesn’t help that the majority of the performances range from “wooden” to “school play-quality.” The exceptions are Hayes (a newcomer with a fierce, dangerous glint in her eye that makes her a decent Bonnie) and Roberts (a pro who drawls a bit of life into his line readings, even if he’s in the movie for less than 10 minutes).

Bonnie & Clyde: Justified briefly touches on some interesting points about media manipulation and directly ties their desperate, Depression-era exploits to modern times. Unfortunately, the film doesn’t really expand on either of these points because it’s time for Bonnie to grab a cigar and pose for another picture. Then again, I can’t exactly say I’m mad at this misguided mess of a movie. In its attempt to cash in on the renewed interest in Bonnie and Clyde — the same way the release of Hatfield & McCoys: Bad Blood suspiciously followed the record-breaking History channel miniseries — this film actually made me want to go back and watch the old Beatty/Dunaway classic.  I suggest you skip this one and do the same.