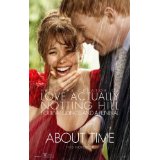 “For me, it was always going to be about love.”

The best time travel stories don’t endure because people really like thinking about wormholes and paradoxes. No, it’s the idea of reliving the past or getting a peek at what’s next — before realizing we’re better off just living each day to the fullest — that captures our imagination. That’s why a filmmaker like Richard Curtis, best known for writing and directing romantic comedies like Love Actually, as well as his Four Weddings and a Funeral and Notting Hill screenplays, can take on a fantastical concept like time travel so naturally. Based on Curtis’ filmography, you’d expect his take on the subject to be about a boy…standing in front of a girl…asking her to love him…by traveling back in time and finding out all the stuff she likes. But you’d only be mostly right.

“I always knew we were a fairly odd family.”

Using voiceover narration, Tim (Domhnall Gleeson, borrowing Hugh Grant’s patented Self-Deprecating Cadence) introduces us to his family, which includes his sensible “rectangular” Mum (Lindsay Duncan), stylish and oblivious Uncle Desmond (Richard Cordery), free-spirited sister Kit Kat (Lydia Wilson) and Tim’s genial Dad (Bill Nighy). On Tim’s 21st birthday, his dad informs him that the men in their family are able to travel back in time. It’s a fantastic scene because Nighy’s inherent playfulness as an actor really makes it seem as if Dad is playing a straight-faced prank on Tim. A skeptical Tim humors his father and is shocked to be reliving a recent New Year’s Eve party.

Not surprisingly, About Time doesn’t exactly treat the science of time travel with the heft of Lost or Doctor Who. In fact, Dad shrugs off any concerns about a butterfly effect and briskly runs through the rules: Tim can only go back in time (not forward), and he can only travel to places he’s already been. (So much for “shagging Helen of Troy.”) The film’s third act introduces some wrinkles that could’ve been handled more elegantly, but Dad advises Tim to simply think about what makes life great when he’s using his ability. For example, Dad says he mostly used his power to read every book he wanted (and the audience can deduce he also dedicated a healthy amount of time to becoming a great ping pong player). Of course, Tim decides he wants to be in love.

“Lesson #1: All the time travel in the world can’t make someone love you.”

After an ill-fated attempt at summer love at his family’s picturesque, beachside home, Tim relocates to London to pursue a career as a lawyer and moves in with caustic playwright Harry (Tom Hollander, possibly standing in for the segment of the audience who might feel cranky about being forced to take part in a sappy rom-com). During a (literally) blind date, Tim meets Mary (Rachel McAdams), the girl of his dreams. But in an effort to help Harry’s professional career, Tim inadvertently undoes his first meeting with Mary. You probably guessed by now that Tim uses time travel to court Mary and try to make her fall in love with him.

You probably didn’t guess that Tim’s (underhanded) pursuit of Mary only covers the first half of the movie. About Time is a love story through and through, but the bittersweet second half of the film refreshingly goes beyond “boy tricks meets girl” and explores the strong bonds among siblings, as well as the relationships between parents and their children.

Gleeson, who looks like he could play one of the lesser Weasley brothers (oh wait, he did), carries the movie quite well in his first major leading role. At his core, Tim is a dork, so it’s fun watching Gleeson (the son of actor Brendan Gleeson) play both the clumsy and comically cocky side of the same exact scenario. He’s also a convincing, likable romantic lead, even though Tim’s methods are objectively slimy. (Then again, Tim using time travel to score points with Mary might just be the whimsical version of scoping out a potential date’s Facebook page for info you can use.) McAdams, unfortunately, doesn’t get the benefit of Tim’s voiceover narration, so we never get to know Mary nearly as well. At one point Mary claims she’s insecure and has a temper, but we don’t really see much evidence of either. I also got the sense that Mary was supposed to be something of a Plain Jane; the problem is a fringe haircut and all the dowdy clothes in the world can’t dampen McAdams’ star power. At least we know McAdams has a type: she previously played the title role in The Time Traveler’s Wife.

As in most romantic comedies, the real scene-stealers are the supporting players. While I enjoyed daffy characters like Uncle Desmond and Tim’s nice-guy co-worker Rory, as well as crabby Harry, the real master thief was Nighy, who has appeared in each of the three movies Curtis has directed. His Dad simultaneously makes time travel seem like “not that big of a deal” and “the greatest thing in the world” thanks to Nighy’s tossed-off charm.

Then again, the wondrous concept of time travel often has a tossed-off charm. (Why do you think random/ridiculous vessels like phone booths and hot tubs have been used for time travel?) The time travel in this film isn’t taken very seriously, yet the device still manages to create troublesome plot holes. I’m not saying Curtis needed to run his script by a team of physicists to ensure it all made sense, but I’d certainly expect any writer to at least follow his own (loose) guidelines.

The 123-minute running time feels about 10-15 minutes too long, which is a common problem for filmmakers who direct their own scripts. (Even Love Actually, which I adore, would’ve been fine without the porn stand-ins subplot.) Then again, Curtis has said he’s retiring from directing, so I’m not surprised he tried to incorporate as many of his ideas as he possibly could into his last film. What matters most is that Curtis has created one of the year’s funniest and most touching films with echoes to other “savor every moment of every day” fantasies like Groundhog Day and Click. Any problem I have with superfluous subplots or sloppy time travel logic is “not as dramatic as it sounds.”