Posted in: Disc Reviews by Gino Sassani on November 7th, 2013 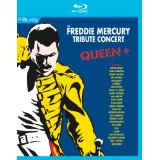 “I like people to go away from a Queen show feeling fully entertained, having had a good time. I think Queen songs are pure escapism, like going to see a good film – after that, they go away and say that was great, and go back to all their problems” – Freddie Mercury

I had that very pleasure back in the late 1970’s when I attended a Queen concert at the old Spectrum in Philadelphia. It was one heck of a show. Freddie was flamboyant as always. They were also quite good. I still remember an acoustic set they did in the middle. Take away the “plugs” and you really find out what kind of musicians you’re dealing with. Apparently, pretty good ones.

On November 24th 1991 Freddie Mercury died of complications caused by AIDS. He had known he was ill for some time, and it never stopped him from doing what he loved to do most: entertain. He recorded vocal and piano tracks to brand new songs so that the band could release one more album after he was gone. That album was called appropriately enough, Made In Heaven. The lyrics are loaded with questions of life, love and mortality. It’s a bittersweet collection and actually a stronger album than it was ever given credit for.

The following year the surviving three members of Queen decided that it was important to raise awareness and money for the disease that took their legendry frontman. Offers of support quickly followed, and some of Freddie’s friends in the business pitched in to create The Freddie Mercury Tribute Concert also known as Queen +. It established the Mercury Phoenix Trust, which has raised more than $15 million for AIDS research around the world. The concert raised money and awareness, and just as important it allowed his band mates, his friends and his fans a chance to say goodbye in style.

Now more than 20 years later that moment in time has been released on Blu-ray from Eagle Rock Entertainment. The release includes both the main show and the hour-long support act show for a total of over three hours of music. The participants included Elton John, David Bowie, Roger Daltrey, Robert Plant, Paul Young, Annie Lennox, George Michael, Axl Rose and even Liza Minnelli and Elizabeth Taylor. There are dozens more, of course.

What makes this tribute concert a cut above the rest is the on-stage presence of the surviving Queen members. This is much more than artists delivering their own versions of Queen songs. These performances are much truer to the originals, because the band is the original band. Brian May delivers his signature guitar licks as if he were still playing with Freddie. He is the most obviously emotional member of the group and appears to be the stage manager. He’s very much the heart of the event. Roger Taylor contributes the energy with his tireless work on the drums. He’s having the best time of the three. John Deacon provides the soul. He’s his usual reserved self, and at times you can almost see his mind working out a bittersweet memory or two while adding the depth of his bass work. Each guest still adds their own flourishes, but the music is remarkably true to the original.

There were some highlight moments for me. It was just fantastic to hear Brian May do a solo piano version of Too Much Love Will Kill You. At this point the tune had yet to be released as one of those from Made In Heaven. The man gets choked up a few times, and it was easily the most emotional performance of the night. It was a treat to find that Elton John, of whom I’m a pretty big fan, happens to have the same favorite Queen song as I do. He does The Show Must Go On, which I’ve also had the pleasure to see him perform live. It was from the last album the band did completely together. I didn’t really know who Lisa Stansfield was, but she did a great job with I Want To Break Free. George Michaels often sounded eerily very much like Freddie on the cuts that he did. Look close and you’ll notice that Brian May appears to be thinking the same thing. It might be interesting to see them tour together. Elizabeth Taylor provided the oddest moments of the night. She did not sing but gave a rather preachy lecture that was not appreciated by everyone in the audience. At one point someone shouted for her to get off the stage, and she got into it with them a bit. I understand her message, but they should have left it for the fans to have gotten the idea. Give them a little bit of credit. They came to honor Freddie and hear music.

Perhaps the most moving parts of the concert are the many infusions of Freddie clips. Everything from music video footage to a ton of concerts keeps the focus on why these folks where there at Wembley that evening. Many of the clips feature Freddie’s traditional crowd warm-ups, something I remember quite vividly from the show I saw. He often took the stage early to lead the crowd in vocal exercises. We get to see many of these moments. There are also some rather intimate interview clips where Freddie allowed a rare glimpse at his own thoughts and feelings.

Of course, the music takes center stage intertwined with all of this emotion. The crowd was huge, and the long shots bring the whole event into rather sharp perspective. To watch is to wish you had been there. Consider the Blu-ray wish fulfillment.

Enter Sandman, Sad But True, Nothing Else Matters – Metallica

I Want It All – Roger Daltrey &  Tony Iommi

Too Much Love Will Kill You – Brian May solo

Who Wants To Live Forever – Seal

These Are The Days Of Our Lives – George Michaels & Lisa Stansfield

Somebody To Love – George Michaels

The Show Must Go On – Elton John

We Will Rock You – Axl Rose

We Are The Champions – Liza Minnelli

The concert is presented in its original full-frame aspect ratio. This is all very much a mixed bag. Unfortunately, the show was just a hair too early for high definition or widescreen. The age shows. It’s good when you consider what there was to work from but suffers in comparison to so many great releases in recent years. I can’t call the image sharp at all. There are often lines on the edges. The high-definition image presentation does look better than a DVD, and it certainly gives you the best you’re going to get.

The DTS-HD 5.1 is where the release overcomes its age and shortcomings. The mix really pops, and the clarity beats the CD sound fans have been used to for years. The instrument separation has never been better on this concert, and lyrics are perfectly placed and clear. The audience reactions provide a nice ambient presence. It’s the music that matters here, and the release gets that right.

10th Anniversary Documentary: (56:44) This was done in 2002 and includes both interviews from then and from the time of the concert. There’s rehearsal footage and clips from the concert.

You can’t help but feel for the remaining members of Queen. Not only were they honoring their friend, but this was the end of an era for them. John Deacon soon retired, while May and Taylor continued to play and record often reviving the Queen + name with whomever they were playing with. Still, life has and never will be the same for any of them. Freddie and Queen will live on with the fans and the artists who were inspired or influenced by Queen. For them…for us…”The show must go on…”

Gino Sassani is a member of the Southeastern Film Critic's Association (SEFCA). He is a film and television critic based in Tampa, Florida. He's also the Senior Editor here at Upcomingdiscs. Gino started reviewing films in the early 1990's as a segment of his local television show Focus. He's an award-winning recording artist for Omega Records. Gino is currently working on his 8th album Merchants & Mercenaries. Gino took over Upcomingdiscs Dec 1, 2008. He works out of a home theater he calls The Reel World. Favorite films: The Godfather, The Godfather Part II, The Body Snatcher (Val Lewton film with Karloff and Lugosi, not the pod people film), Unforgiven, Gladiator, The Lion King, Jaws, Son Of Frankenstein, The Good, The Bad And The Ugly, and Monsters, Inc.
Clear History (Blu-ray) About Time