Posted in: No Huddle by Brent Lorentson on November 15th, 2013 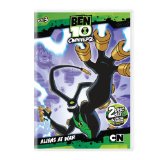 Ben Tennison is back in the action packed collection of Ben 10 Omniverse from Cartoon Network.  In 10 newly released episodes we follow Ben and his fellow Plumbers as they do battle against the meanest and the ugliest aliens the galaxy has to offer, in our universe or any parallel universe out there. This cartoon is infectious.  From its catchy opening music, imaginative characters and fun action sequences this is a cartoon that simply grows on me more and more, and I have no shame in admitting that I’m a fan of this “kids’” show.  For a while I had my issues with Ben; he’s reckless and cocky, but this is what would be expected of a teenager who wields an Omnitrix, a device that allows Ben to transform into a selected alien when in the heat of battle.  What teen wouldn’t feel a bit over-entitled once they’ve done battle with the worst the universe has to offer and still managed to survive?

One of the standout episodes from disc one for me is the first episode, T.G.I.S. an episode that has Ben teaming up with a group that calls themselves The Secret Saturdays who specialize in hunting crypto-zoological creatures.  It’s a fun episode that explores the Undertown world while delivering Chupacabras along with fighting on the streets and in airships.  For those who dig Ben 10 for their fighting and assortment of aliens and creatures, this episode delivers it all.

Disc two offers up plenty of fun episodes as well. Rad is an adventure where Ben has little time to save a crew of stranded Plumbers, but in order to do so they need to capture a Grackflint that contains venom that can change the effects of the toxic atmosphere where the crew is stranded.  To make matters worse, they need to get through a blockade of evil aliens, and the only person willing to make the dangerous trip is Rad Dudesman.  Rad is something of a mix between Han Solo and any 80’s action hero with enough weapons to make any member of the NRA blue with envy.  This episode was over way to soon; this could have been a multi-part episode and I would have been happy.  And though this episode was fun and great, still I can’t say it’s the best one in the collection.

As for the best in the volume, that honor goes to Ben Again.  This episode takes the body-swapping formula and shakes things up by swapping a young Ben with the teenage Ben in their alternate timelines.  I love stories about time travel, and how they play with the alternate time lines is a blast as well.  In this episode we really get to see how much Ben has grown over the years, not just as a fighter but as a boy becoming a young adult.

The more I watch the show, the more I’ve grown to appreciate what the creators have delivered.  Each episode revolves around a high concept that could fill a feature film, but yet they deliver it in a solid 22 minutes without any dull moments.  With clever writing and solid animation, this is a collection of episodes I feel kids will devour and want to revisit again and again.

Brent Lorentson is a horror writer and film critic based out of Tampa, Florida. With a BA in Digital Film, he co-wrote and co-directed Scavenger Hunt. His short stories have appeared in various horror anthologies. In 2019 his short script Fertile Blood will be a part of the anthology horror film Slumber Party. He is currently working on his first novel A Dark and Secret Place set to be released in late 2019. Favorite Films: Taxi Driver, Fight Club, I Saw the Devil, The Wild Bunch, Dawn of the Dead, A Clockwork Orange, Pulp Fiction, Heathers, The Monster Squad, and High Fidelity.
Dallas Buyers Club Prince Avalanche (Blu-ray)